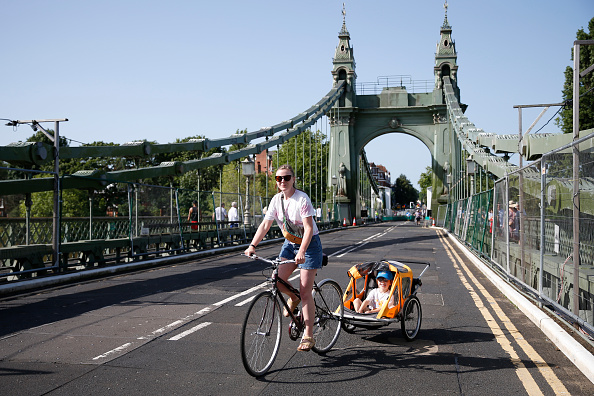 A cyclist rides over the Hammersmith Bridge on July 17, 2021 in Hammersmith, England. The bridge was closed last year after cracks in the bridge worsened during a heatwave. (Photo by Hollie Adams/Getty Images)
Follow Us

WHILE the world kicked off Olympics in Tokyo, Britain saw an eventful and unusually hot week. Freedom was in the air as the country ended all the lockdown restrictions on July 19.

Pingdemic grips UK as weeks of disruption is expected in food and drink supply, rail transport, bin collection and other essential services due to acute staff shortage.

Britons got baked this week as temperatures more than 31C prevailed in some part of the country.

Former aide to British prime minister Dominic Cummings said he discussed the possibility of toppling Boris Johnson shortly after an election triumph in 2019.

Home secretary Priti Patel is set to come up with new strategy to tackle violence against women and girls, which is expected to be comprehensive and is also expected to include offence against street harassment.

‘Ban’ sought on entry of a leading Pakistani politician

A complaint was filed with the Metropolitan Police in London, accusing a leading politician Maryam Nawaz, over her “anti-Semitic” statement against prime minister Imran Khan’s children.