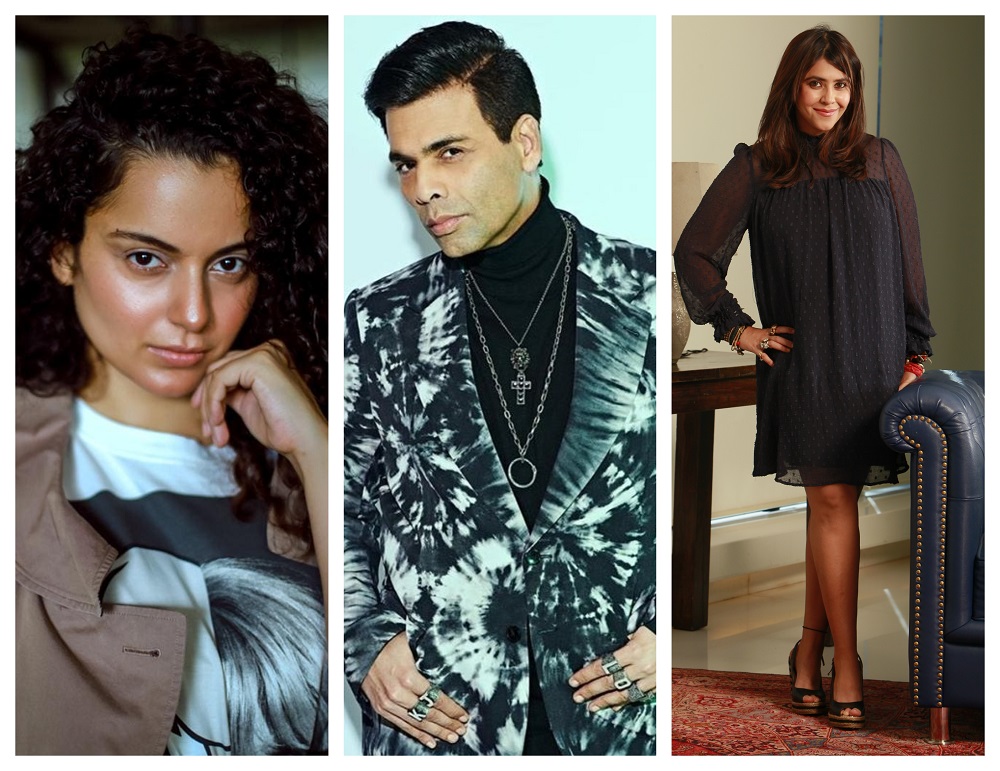 Leading Bollywood actress Kangana Ranaut, filmmaker Karan Johar and producer Ekta Kapoor have been honoured with Padma Shri by the government of India on Saturday, the eve of the 71st Republic Day. Padma Shri is the fourth highest civilian award of India, after the Bharat Ratna, the Padma Vibhushan and the Padma Bhushan.

Elated Kangana, who can be currently seen in Fox Star Studios’ Panga (2020), dedicated her award to the women of the country. She said in her statement, “I am humbled and I am honoured. I thank my country for this recognition and I dedicate this to every woman who dares to dream. To every daughter… to every mother… and to the dreams of women who will shape the future of our country.”

Congratulating the actress on the prestigious win, Ashwiny Iyer Tiwari, the director of her film Panga, said, “There are very few humans who have the ability to be visionaries not for just themselves but also for others. Kangana has risen on her own through her dedication and hard work despite many challenges and limited support. This recognition empowers many more women of our beloved country to walk their own chosen path fearlessly.”

Karan Johar also expressed his happiness on getting the award. The filmmaker said in his statement, “It is not very often that I am at a loss for words, but this is one such occasion… The Padma Shri. Such an honour to receive one of the highest civilian awards in the country. Overwhelmed by so many emotions right now. Humbled, elated and also thankful for the opportunity to live my dream every day, to create and to entertain. I know my father would be proud and I wish he was here to share this moment with me. Blessed.”

Ekta Kapoor, known for revolutionizing the Indian television industry, said that the timing could not have been more perfect as the news arrive two days before the first birthday of her son.

Not only Kangana Ranaut, Karan Johar and Ekta Kapoor, but well-known singers Adnan Sami and Suresh Wadkar have also received the honours. The Padma Shri for this year has been awarded to a total of 118 eminent personalities from various fields.

Uncategorized
At least 13 people have died and 53 others were injured after a bus skidded off a bridge and overturned in northeast India, media quoted police as saying. The bus was travelling from Jharkhand state to Raipur, state capital of Chhattisgarh, when it came off the road at around 10.30 pm local time (1700 GMT) on Wednesday, national news agency Press Trust of India reported. The driver saw a motorcycle at a sharp bend and swerved to avoid him but lost control of the wheel, causing the bus to come off the bridge and flip over two or three times, local police superintendent Sadanand Kumar told PTI. Of those injured, 16 were in a critical condition, he added. Fatal traffic accidents are common in India, which has some of the world’s deadliest roads with more than 200,000 fatalities annually, according to the World Health Organization. Last month, a bus carrying performing artists plunged 76 metres (250 feet) into a gorge in the east of the country, killing at least 27 people, including a child. And in February, a packed passenger bus plunged off a bridge into a river in western India, killing at least 37 people in one of the country’s deadliest road accidents in recent years.