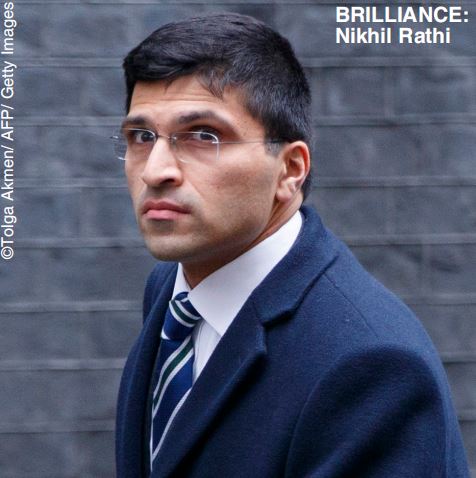 HE WENT to an ordinary state school in the northern industrial town of Barrow before becoming successively a Treasury mandarin, a private secretary to two prime ministers and CEO of the London Stock Exchange Group (LSEG). All of this was accomplished before the age of 40. No wonder that Nikhil Rathi, a serial shatterer of glass ceilings, has also been dubbed a wunderkind.

The son of a doctor, and an Oxford graduate, his modest demeanour can at times belie his brilliance and relative youth.

Though the huge responsibility of running the LSEG means he must now reside in London, his heart, it seems, remains attached to his home town in Cumbria: “Barrow is definitely where I feel most at home. It’s where we moved when I was very young. We had no other family and there are so many people in Barrow whom we can genuinely call family now, whom I’m very attached to, and the wonderful thing about Barrow is how warm and open people are.”

Appointed as LSEG boss in 2015 at the tender age of 36, under his leadership London has continued to be the premier global market for both domestic and international companies who remain attracted to its unrivalled international investor base and deep pool of liquidity when raising capital to grow their businesses.

Last year alone more than 600 firms raised a total of £37billion in the City while Frankfurt, London’s main Continental rival, raised just £25.9billion. Moreover in the past 18 months, record numbers of tech firms have floated in the City, while there were also 21 floats by foreign businesses last year.

Gratifying as such statistics are, the question Rathi is probably asked most these days is whether the City’s pre-eminence as Europe’s busiest stock market will continue after Brexit, and, in particular,