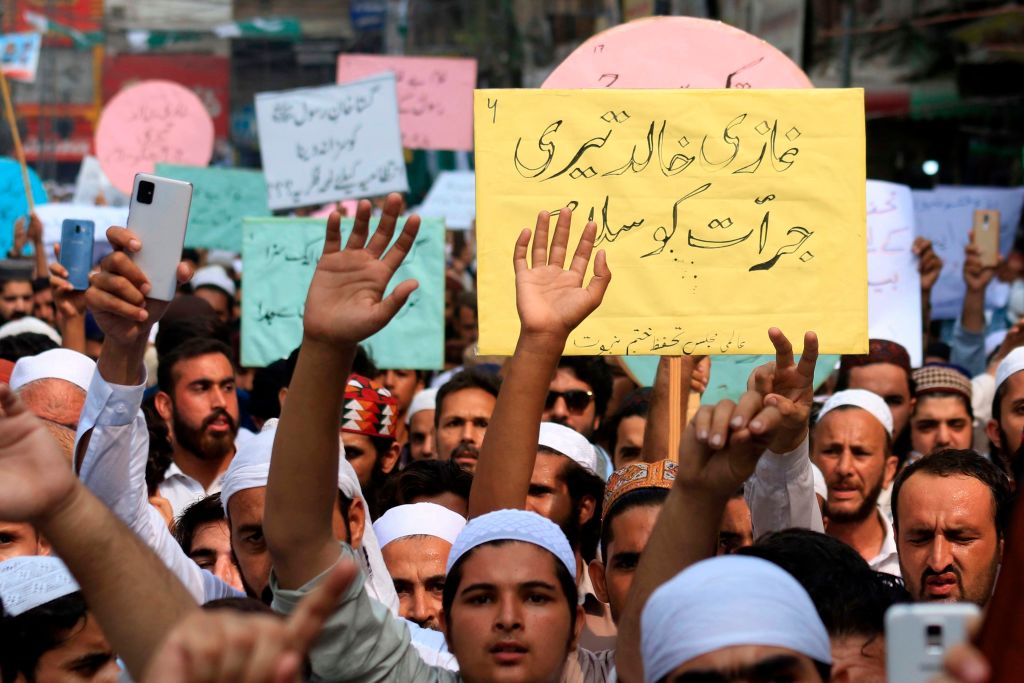 A file photo of supporters of religious group Aalmi Majlis Tahaffuz Khatm-e-Nubuwwat march during a rally in support of Khalid Khan, who killed a man accused of blasphemy, in Peshawar on July 31, 2020. Blasphemy is a sensitive issue in Pakistan. (Photo by ABDUL MAJEED/AFP via Getty Images)

THE female principal of a Pakistan school has been handed down capital punishment for blasphemy in an eight-year-old case.

Salma Tanveer, who is also the owner of the private school, was charged with distributing photocopies of her writings in her Lahore neighbourhood in 2013, denying the finality of prophethood and claiming herself a prophet.

Her writings contained words considered derogatory and she was arrested following complaints from residents of her area.

A sessions court of Lahore rejected her counsel’s argument that she was mentally unsound at the time of occurrence, saying records showed that she was running her school single-handedly till her arrest.

A report of a medical board of the Punjab Institute of Mental Health found the woman fit to stand trial, judge Mansoor Ahmad Qureshi said in his 22-page verdict on Monday (28).

“It is proved beyond reasonable doubt that accused Salma Tanveer wrote and distributed the writings which are derogatory in respect of Holy Prophet Muhammad (PBUH) and she failed to prove that her case falls in exception.”

“Salma Tanveer is sentenced to death,” the verdict said and fined her Rs 50,000 (£217), according to the Dawn newspaper.