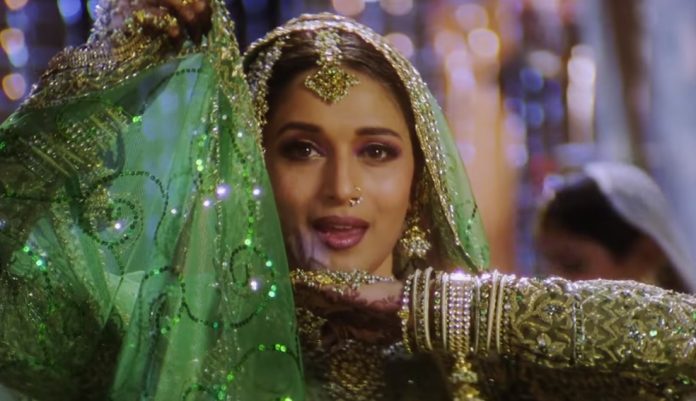 Madhuri Dixit is undoubtedly one of the most famous actresses of Bollywood. In her career spanning more than three decades, Madhuri Dixit has given some commendable performances on the big screen. There’s no doubt that she is a fantastic actress, but her dance numbers are something she is always remembered for. Today on her 52nd birthday, let’s look at the top 10 songs of the actress…

Ouch! The first one in the list has to be Dhak Dhak Karne Laga from Beta. Beta released in 1992 but still after so many years, Madhuri is called the Dhak Dhak girl of Bollywood. Her sensual moves in the song would make anyone’s heart go dhak dhak and her chemistry with Anil Kapoor was simply fantastic.

When we talk about the famous songs of Madhuri Dixit, Ek Do Teen from Tezaab surely deserves a mention. The hook step of the song is still remembered and no one can do it better than Madhuri Dixit.

Madhuri Dixit was amazing at doing Bollywood dancing, but in the song Akhiyaan Milaoon from Raja she proved that she can also carry the western dance steps very well. By the way, we loved her eye expressions here.

Maybe Yaraana is one of the least remembered films of Madhuri Dixit, but we can never forget the song Mera Piya Ghar Aaya. Madhuri’s energetic thumkas were the highlight of the track and yes, the hook step of this song too is still remembered.

Anjaam might be remembered for the grey character Shah Rukh Khan played in it, but the song  Chane Ke Khet Mein was surely one of the highlights of the film and how can we forget those amazing expressions.

‘Hum pe yeh kisne hara rang dala, khushi ne hamari hame… Maar Dala’. Well, Maar Dala from Devdas is one of the best dance numbers featuring Madhuri Dixit. Not just the dance, but the actresses adaas also stole our hearts. And not to forget she looked gorgeous in the song.

Dola Re Dola from Devdas featuring Madhuri Dixit and Aishwarya Rai was a visual treat. Madhuri and Ash both danced amazingly, but of course, it was the former who stole the show. By the way, it is said that Madhuri was pregnant during the shooting of Dola Re Dola and well, we must say she still carried off difficult steps effortlessly.

Prabhudheva is called the god of dancing, but Madhuri Dixit in the song Kay Sera Sera danced like a pro with him and proved that she is not less than the goddess of dancing. This song is one of the most underrated tracks of Madhuri Dixit.

Aaja Nachle didn’t work well at the box office, but we cannot ignore the fact that Madhuri stole our hearts with her dance in the film. The title track took us back to the Madhuri Dixit that we saw in the 90s.

Last in our list is Ghagra from Yeh Jawaani Hai Deewani. Madhuri Dixit shook a leg with Ranbir Kapoor in the film and her killer moves made us go dhak dhak once again.