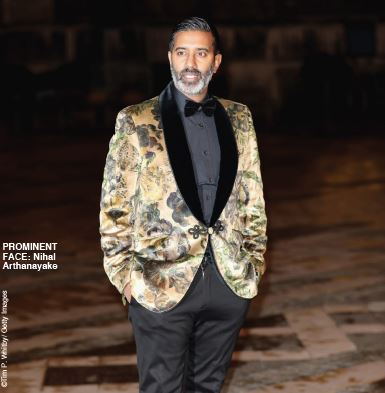 A FAMILIAR face as the Asian Media Group’s ebullient awards dinner host, Nihal Arthanayake has carved a rather special place for himself in the British media scene.

A presenter both on TV and radio with a permanent show on BBC 5 Live’s Afternoon Show (1pm-4pm), now named simply after its presenters, he’s one of the most prominent Asian faces on the national media scene.

Arthanayake’s interviews with young YMCA charges in Salford, Manchester, illustrated his qualities as an interviewer: empathy, a close listener, and able to relate to people with a different life trajectory and background. He’s just as adept with business figures when he interviews millionaires and billionaires at AMG Asian Business Awards dinners.

One of his interviewees was a Salford teenager who had reported his own neglect at home when he was just 10 years old. This Afternoon edition of Five Live, YMCA: How it changed the lives of three young people, is available online. Arthanayake said this particular interviewee moved him to tears (even as a professional broadcaster).

Being in the moment and alive to immediate events is something that any afternoon presenter must possess if they are to be in some very rare instances, the eyes and ears of a nation (around five million tune into 5Live every day on average).

Perhaps, that was no more apparent than when Arthanayake hosted his 5Live show during the last hours of prime minister Theresa May government on July 24 and the first few of her successor, Boris Johnson.

As the unmistakable winds of change blew through Westminster that day, Arthanayake reminded his 87,000+ Twitter followers that he had a Johnson story, “Everyone in the media seems to have a Boris Johnson story. Here’s