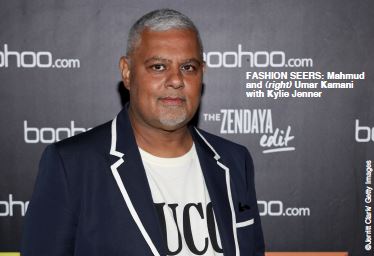 UMAR KAMANI started his online fast-fashion retail brand PrettyLittleThing in 2012 when he was 24 years old.

Like his brother and business partner Adam, he was born into the rag trade.

When just a small child their father Mahmud had arrived with his parents and siblings as part of the 1968 exodus of Asians fleeing Kenya. The country’s African nationalist president, Jomo Kenyatta, had passed punitive laws that made it impossible for Indians to earn a living there.

The Kamani family was originally from Gujarat before migrating to Africa, and Mahmud’s great-grandfather had been a schoolmate of another eventual migrant to Africa, Mohandas Gandhi, in Rajkot in the 1880s.

Mahmud jokes that the family finally ended up in Manchester because that was where the plane landed: travelling to London would have cost £60 more and their total wealth was only £758.

Mahmud’s father Abdullah quickly set about making clothes to sell locally, and soon was importing from India and Africa with his son, a natural salesman, joining him.

By the early 2000s the internet was slowly beginning to transform retail and Mahmud, already supplying clothing chains across Europe, was thinking of setting up his own label and trading online, where there were fewer overheads and where he could sell more quickly and cheaply direct from the warehouse.

A few years earlier when it was a craze to speculate on internet domains his brother, Nurez, had bought the Boohoo.com name and in 2006 – when the family firm was already turning over in excess of £50 million – Mahmud launched the pioneer online clothing company (with fashion business partner Carol Kane).

Internet shopping was just beginning to take off and Boohoo grew with astonishing speed, “buying and sourcing in China and India, designing and making in Manchester,” catching and riding the