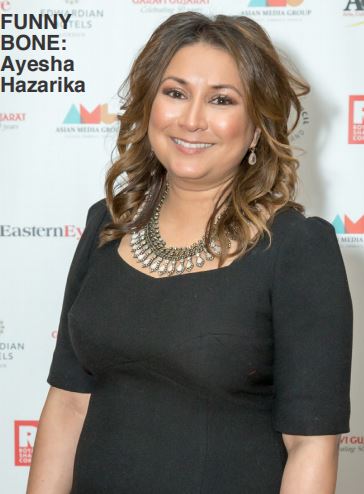 Ayesha Hazarika was a rising star in politics when she decided to switch careers and become a stand up comedian. A special advisor to various Labour bigwigs such as Harriet Harman and Ed Miliband, Ayesha suffered what she calls a “quarter-life crisis” that prompted her to switch careers.

In 2015, Ayesha ditched her career in politics to become a stand-up, and understandably, this decision was met with raised eyebrows. But Ayesha’s successful career as a comedian seems to have silenced critics. Ayesha’s Girl on Girl and State of the Nation have been hits, proving she has what it takes to make it a field that is largely dominated by men.

When she first started doing stand-up comedy in 2001, there weren’t many women comedians around. At out of town gigs, there wouldn’t be more than one woman on the bill. But promoters have become more enlightened now, says Ayesha.

Also, being a female Muslim comedian from the west of Scotland has worked in her favour. “Who I am makes people pay attention, ” she told the Herald Scotland. “After shows I now get told things like, I didn’t think a woman could be funny.’ And anyway, after living in places like Coatbridge and Hamilton I can handle pretty much anything.”

The daughter of parents from India, Ayesha grew up in Lanarkshire and had a strict Muslim upbringing. She studied law at Hull University before heading to London to study journalism and politics.

Her parents were not happy with her decision, as they wanted her to pursue a career in medicine or accountancy.

“I used to joke, don’t worry, your son is a doctor and your daughter is a spin doctor!” she told Eastern Eye in 2016.

Ayesha started her career as a press officer with the government, but she wanted