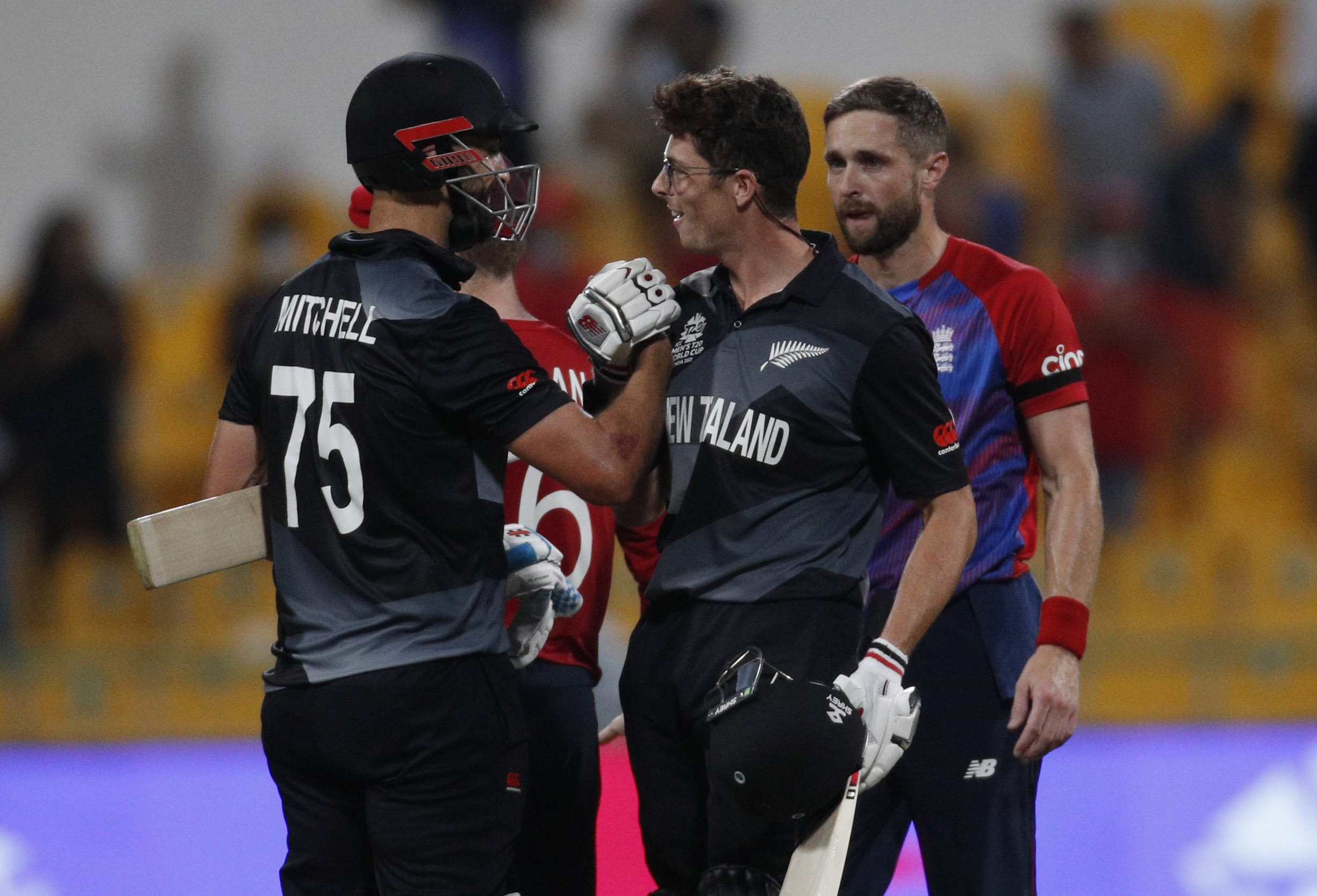 DARYL MITCHELL smashed an unbeaten 72 while Jimmy Neesham was hailed as a “momentum changer” as New Zealand defeated England by five wickets to reach the Twenty20 World Cup final on Wednesday (10).

Chasing 166 for victory, New Zealand were in deep trouble at 13 for 2 and 107 for 4 when Neesham turned the semifinal on its head with an 11-ball 27 to help achieve the target with one over to spare in an Abu Dhabi thriller.

With 20 needed off the final 12 balls, Mitchell smashed Chris Woakes for two sixes and a four before his 47-ball blitz triggered wild celebrations in the New Zealand dug out.

New Zealand will face either Australia or Pakistan in Sunday’s final.

“We knew it would be a great game of cricket,” said New Zealand captain Kane Williamson whose team lost the 50-over World Cup final to England on a Super Over at Lord’s in 2019.

“I am really chuffed with the heart that was shown throughout that performance.”

He added: “It was outstanding from Mitchell at the top. His character stood out, an incredible knock.

“T20 cricket is a game of small margins. Jimmy came out and hit the ball hard, and changed the momentum of the game. Ultimately the deciding factor.”

Mitchell, the son of former All Blacks rugby coach John, said he was delighted to reach the final.

“It was a bit of a whirlwind, but nice to get the job done and move onto the big dance,” he said.

“It was cool to have dad there in the stands. Obviously with the bubble life I can’t catch up with him, but I’m sure I’ll have a chat to him on the phone tonight and he’ll be pretty chuffed.”

The Kiwis suffered early blows after Woakes struck on the third ball to send Martin Guptill trudging back to the pavilion for four.

The fast bowler then got Willimson’s prized scalp for five after the batsman attempted a scoop shot to be caught at fine-leg.

Mitchell and Devon Conway put on 82 runs for the third wicket but Liam Livingstone struck with his leg spin to have Conway stumped for 46.

Neesham took the bowling head on as he smashed Chris Jordan for two sixes – one of them nearly caught at the boundary by Bairstow but his knee touched the rope – and a four to get 23 runs from the over.

He finally fell to Adil Rashid’s googly with skipper Eoin Morgan holding on to a catch at extra cover.

“Full credit to Kane and his team, they outplayed us today,” said Morgan.

Earlier Moeen Ali smashed an unbeaten 51 to steer England to 166-four after being invited to bat as Williamson won an all-important toss.

England lost their openers including Jos Buttler for 29, lbw off Ish Sodhi.

But Moeen hit back with his 37-ball knock and put on a key partnership of 63 with Dawid Malan, who hit 41, for the third wicket.

In-form Buttler tried to rebuild but an attempt to reverse sweep legspinner Sodhi got him trapped lbw for 29 off 24 deliveries.

The opener, who moved past Pakistan’s Babar Azam as the leading batsman in the tournament with 269 runs, reviewed the call but replays suggested the ball would have hit his off stump.

The left-handed Malan, who was dropped on 10 by wicketkeeper Conway off Neesham, hit the first six of the innings off Southee in the 16th over but departed next ball caught behind.

But Moeen launched an attack as he hit Sodhi for a six and then smashed Milne for two hits over the fence.

Livingstone hit 17 off 10 balls before departing and Moeen completed his first fifty of the tournament with a boundary off Neesham.