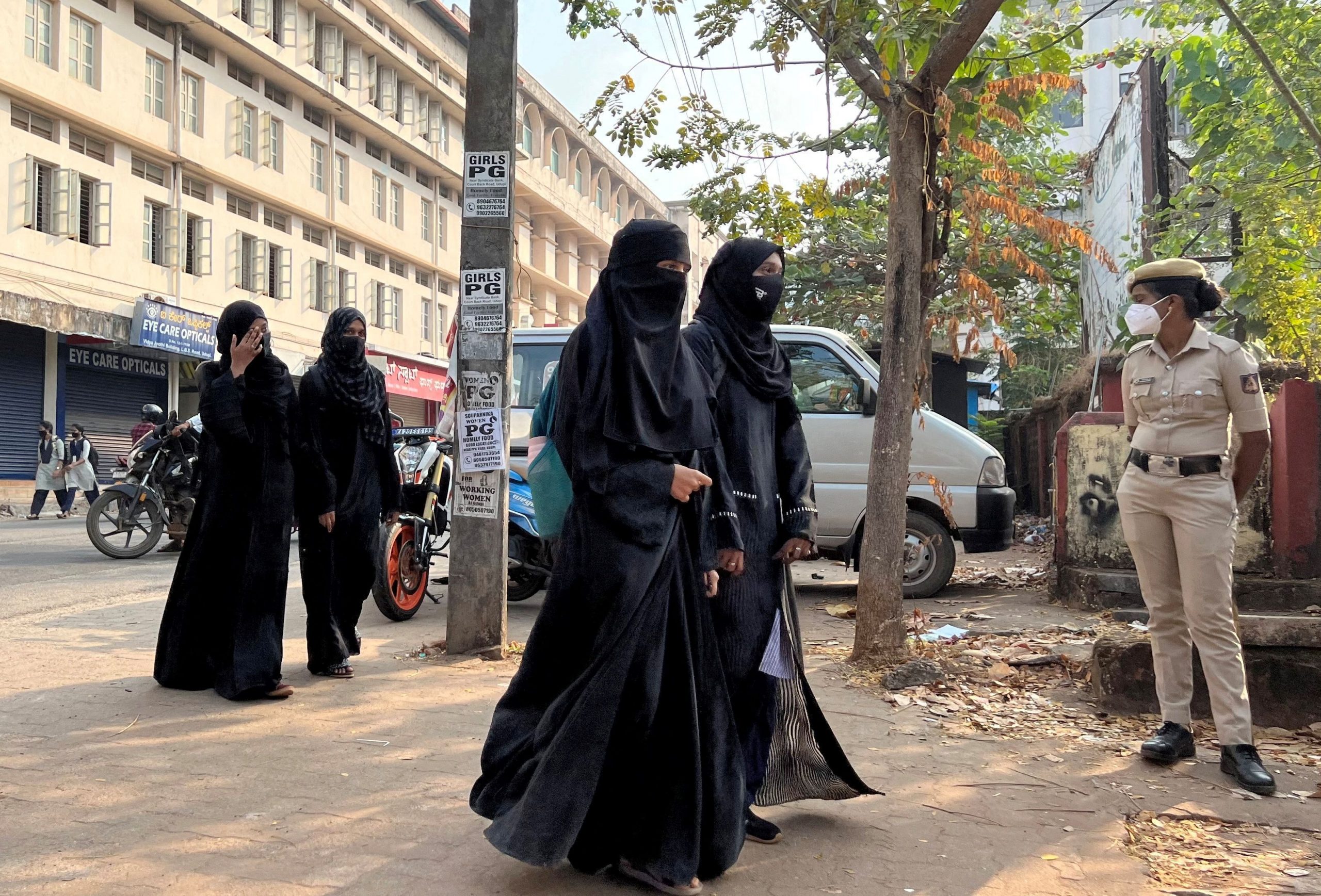 Hijab-wearing students arrive to attend classes as a policewoman stands guard outside a government girls’ school after the recent hijab ban, in Udupi town in the southern state of Karnataka, India, on February 16, 2022. (REUTERS/Sunil Kataria/File Photo)
Follow Us

AN INDIAN court upheld on Tuesday (15) a ban on wearing the hijab in classrooms in the southern state of Karnataka, a ruling that could set a precedent for the rest of the country which has a big Muslim minority.

The ban last month by the state sparked protests by some Muslim students and parents, and counter-protests by Hindu students. Critics of the ban say it is another way of marginalising a community that accounts for about 13 per cent of Hindu-majority India’s 1.35 billion people.

“We are of the considered opinion that wearing of hijab by Muslim women does not form a part of essential religious practice,” Chief Justice Ritu Raj Awasthi of the High Court of Karnataka said in the judgement.

He said the government had the power to prescribe uniform guidelines, dismissing various petitions challenging the order.

Ahead of the verdict, Karnataka authorities announced closures of schools and colleges and imposed restrictions on public gatherings in some parts of the state to prevent potential trouble.

Karnataka, home to the tech hub of Bangalore, is the only southern state ruled by prime minister Narendra Modi’s Hindu nationalist Bharatiya Janata Party (BJP) and holds state assembly elections next year. Critics say the BJP could benefit from the division between Hindus and Muslims, though the party says the hijab ban had nothing to do with their political ambitions.

Students who had challenged the ban in court had said wearing the hijab was a fundamental right guaranteed under India’s constitution and essential practice of Islam. The challengers could not be immediately contacted.

Abdul Majeed, Karnataka chief of the Social Democratic Party of India that mainly fights for Muslim causes, said he would speak with the petitioners and their parents to help them challenge the verdict in the Supreme Court.

“The high court order is against individual rights, against fundamental rights and against religious rights,” he said.

“Muslim women have been wearing the hijab for hundreds of years.”

Other Muslim politicians, including the former chief minister of Jammu and Kashmir state, called the verdict “deeply disappointing”.

“On one hand we talk about empowering women yet we are denying them the right to a simple choice,” she wrote on Twitter.

“It isn’t just about religion but the freedom to choose.”

Karnataka ministers told reporters that Muslim girl students who are staying away from classes in protest against the ban should respect the judgement and rejoin school.

The ban had led to protests in some other parts of the country too and drew criticism from the United States and the Organisation of Islamic Cooperation.

Last month, union home minister Amit Shah said he preferred students sticking to school uniforms instead of any religious attire. Currently, there is no central law or rule on school uniforms across the country, but the Karnataka ruling could prompt more states to issue such guidelines.

India has experienced several deadly Hindu-Muslim riots since independence in 1947, but hardly any of them in the south.