More than140,000 people have taken part in the world’s largest trial of a blood test that can detect more than 50 types of cancer. 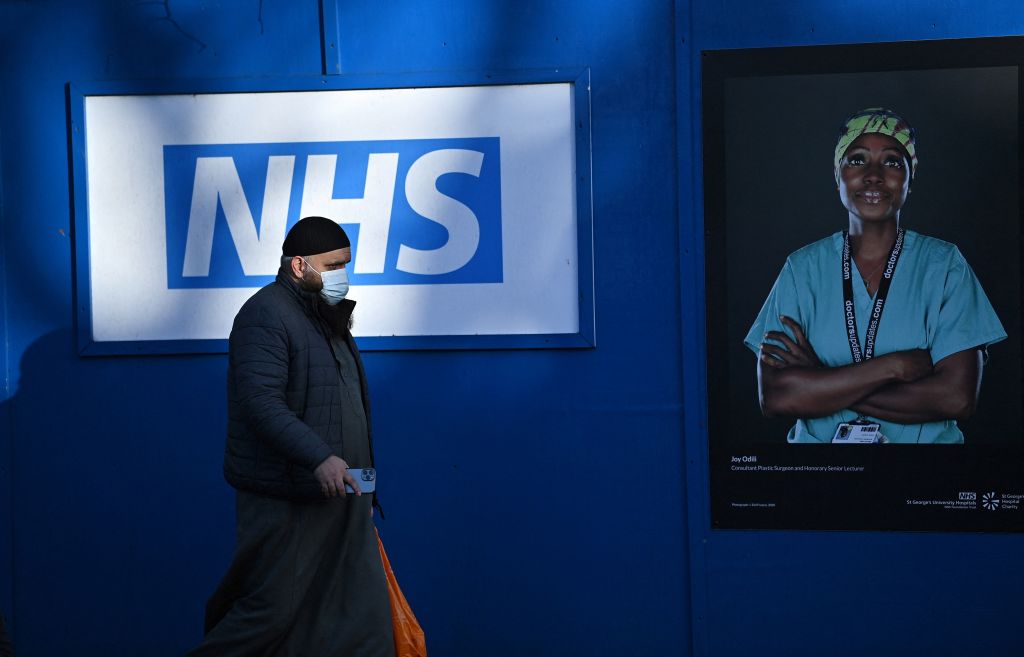 A Pedestrian walks past images of workers of Britain’s National Health Service (NHS) in Tooting, south London. (Photo by JUSTIN TALLIS/AFP via Getty Images)
Follow Us

OVER 140,000 people have flocked to take part in the world’s largest trial of a blood test that can detect more than 50 types of cancer, as part of the latest NHS (National Health Service) drive to catch the disease when it is easier to treat.

Temi, a nurse who lost her mother to pancreatic cancer, said the test and research drive to detect the disease sooner, gave her “hope for the future”.

In just one year since the NHS-Galleri trial began, volunteers from across the country have taken up the invitation to have a blood test at mobile clinics in over 150 convenient locations, including supermarket and leisure centre car parks and places of worship.

The NHS Long Term Plan committed to increasing the proportion of cancers caught early, when they are easier to treat, from half to three in four.

Thanks to national NHS campaigns and early diagnosis initiatives, urgent cancer referrals have been at record levels over the past 12 months – almost one fifth higher than that before the pandemic.

NHS ‘one stop shops’ have already delivered over one million checks and tests, including for cancer, since the rollout began, with over 90 community diagnostic centres (CDCs) offering MRI, CT and other services closer to patients’ homes, often in the heart of local communities.

Initial research has shown that the blood test could help to detect cancers that are typically difficult to identify early – such as those affecting head and neck, bowel, lung and pancreas.

“The NHS will not stand still in our efforts to catch cancer earlier and save more lives, rolling out new and innovative ways to detect cancers sooner; from roaming liver trucks, to genetic testing and high street checks, we want to make it as easy as possible for those most at risk to get vital, lifesaving tests,” Pritchard said.

“Today marks an important milestone in our long-term efforts to catch and treat cancer earlier – we know that certain cancers are harder to detect and a late diagnosis can be devastating for patients and their families, and this trial means thousands could benefit from a diagnosis even before symptoms appear,” she added.

Temi, who is also a trial participant from Peckham in London said, “I lost my mother to pancreatic cancer. It is a type of cancer that you often don’t know about until it has become advanced and then there’s little you can do.

“I’m a nurse and have seen first-hand that cancer does not respect people’s race or background. However, research into early cancer detection gives me hope for the future. So, when I got the opportunity to join the NHS-Galleri trial, I felt this was something I need to get involved with.”

It is vital that trial participants attend their follow up appointments, so researchers, including teams at The Cancer Research UK & King’s College London Cancer Prevention Trial Unit, can understand whether the test could be used in the future as part of the NHS cancer screening programme.

Not only is this trial a major step in NHS efforts to catch cancers sooner, but trial organisers, and the NHS DigiTrials service, have made particular efforts to achieve representation of people from minority ethnic backgrounds, who are often less likely to take part in medical research studies.

While it is too early to report on the results of the trial, a number of participants have been referred for urgent NHS cancer investigations following the detection of a cancer signal.

Those joining the trial were aged of 50 to 77 years old and did not have signs of cancer at the time of enrolment.

Mobile clinics will return to towns and cities from September this year and will follow up with volunteers approximately one year after their initial appointment.

The test works by finding chemical changes in fragments of DNA that shed from tumours into the bloodstream.

If successful, the NHS in England plans to roll out the test to a further one million people across 2024 and 2025.

British health and social care secretary Steve Barclay said, “This country is home to some of the most groundbreaking medical trials the world has to offer and this simple blood test could ensure thousands of people get life-saving diagnoses and treatment as early as possible.

“It’s fantastic to see tens of thousands of people play a part in this vital research and I want to thank all those who have volunteered.

“We’re continuing to do everything we can to secure the UK’s place as a world-leader in cancer care and I look forward to seeing what progress trials like this one will make to meet that ambition.”

Co-Chief Investigator for the NHS-Galleri trial, professor Charles Swanton, said, “This is a really big and important trial and it’s a huge achievement that we’ve now enrolled 140,000 trial volunteers. Whilst the first year of the trial may pick up cancers that have existed for some time, the second and third years provide the best opportunity to explore the expected benefits of picking up new cancers at an early stage when treatment is generally more successful. This will help us work out how the test might be used alongside the existing NHS cancer screening programme.”

Sir Harpal Kumar, president of GRAIL Europe said, “We are so grateful for the public’s enthusiasm for this trial and to all those who have volunteered and are looking forward to participants coming back to our mobile clinics from September.

“Previous research has shown that the test is particularly strong at detecting deadly cancers and our hope is that it will help the NHS to reduce the number of cancers detected at a late stage.

“Galleri test results can provide clinicians with an accurate prediction of where the cancer is located in the body and, with the low rate of false positives we are hopeful that it will work well alongside existing cancer screening in the UK – the results of this trial will be key to our understanding.”

Michael Chapman, director of research and clinical trials at NHS Digital, said, “This is a brilliant illustration of how we can offer more people the opportunity to be part of research using the records held by the NHS. It’s not just the speed of recruitment that is important but also how representative the volunteers are of our diversity, ensuring the results of this trial are relevant to everyone who might benefit.”

This is the latest announcement in the NHS’s drive to catch cancers at an earlier stage, and follows the successful rollout of targeted lung trucks across the country, with more than 30,000 people invited for checks every month in mobile vehicles, and hundreds of cancers diagnosed earlier.

The move also comes on the back of record numbers of people getting checked for cancer over the last year with over 2.6 million people referred between April 2021 and March 2022 and over 670,000 people starting treatment since March 2020.

While last month roaming liver, trucks started offering on the spot scans for people most at risk of getting liver cancer, with mobile scanners visiting GP practices, town centres, and foodbanks to encourage the uptake of quick, non-invasive scans.

Set to begin later this year, staff in high street pharmacies will also be funded to spot signs of cancer and will be able to send people directly for scans and other checks, as part of an initiative to catch tumours early when they are easier to treat.

The NHS-Galleri trial is being run by The Cancer Research UK and King’s College London Cancer Prevention Trials Unit in partnership with the NHS and healthcare company, GRAIL, which has developed the Galleri test.

It is operating with the support of eight NHS Cancer Alliances across England that span Cheshire and Merseyside, Greater Manchester, the North East and North Cumbria, West Midlands, East Midlands, East of England, Kent and Medway, and South East London.