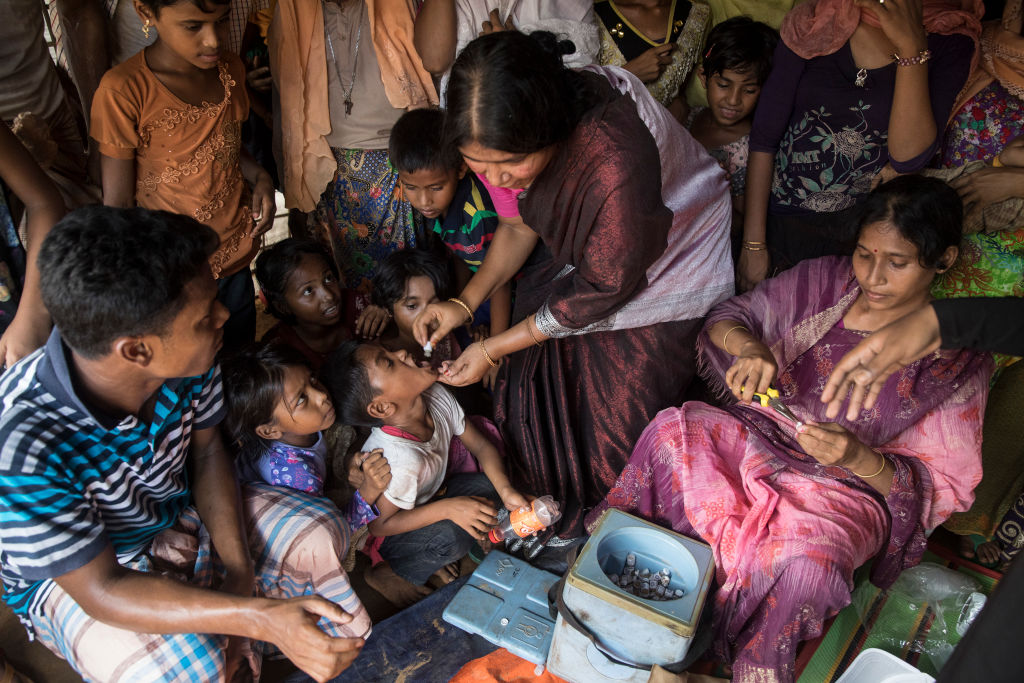 Vaccinators give an oral cholera vaccine to Rohingya, in Thainkhali refugee camp Cox’s Bazar, Bangladesh. The massive cholera immunisation campaign was led by the ministry of health and supported by the World Health Organization and UNICEF to protect Rohingya refugees from cholera. (Photo by Paula Bronstein/Getty Images)

A BANGLADESHI scientist who helped develop a cheap oral vaccine against cholera, a Pakistani microfinance pioneer and a Filipino fisherman are among winners of Asia’s equivalent to the Nobel Prize.

Firdausi Qadri, 70, is one of five recipients of the Ramon Magsaysay Award – named after a Filipino president killed in a plane crash – for her “life-long devotion to the scientific profession” and “untiring contributions to vaccine development”.

Working at the International Centre for Diarrhoeal Disease Research in Bangladesh’s capital Dhaka, Qadri had a “key role” in creating more affordable vaccines to combat cholera and typhoid, the Manila-based award foundation said in a statement on Tuesday (31).

Qadri was also cited for her leading role in a mass vaccination effort in Rohingya refugee camps in Bangladesh’s south-eastern district of Cox’s Bazar in recent years that prevented a cholera outbreak.

The disease causes acute diarrhoea and spreads through contaminated food and water.

Qadri was also cited for her efforts to build up Bangladesh’s scientific research capacity.

The award was established in 1957 to honour people and groups tackling development problems.

It was held virtually this year after the event was cancelled in 2020 due to the coronavirus pandemic.

Pakistani development worker Muhammad Amjad Saqib, 64, was also a winner for his “first-of-its-kind” interest- and collateral-free microfinance programme that has helped millions of poor families.

Nearly two decades after its launch, Akhuwat has grown into the nation’s largest microfinance institution, distributing the equivalent of $900 million (£652m) and boasting an almost 100 per cent loan repayment rate, the award foundation said.

Saqib, who uses places of worship to hand out money, was cited for “his inspiring belief that human goodness and solidarity will find ways to eradicate poverty.”

Another winner was Filipino fisherman Roberto Ballon, 53, who was recognised for helping “revive a dying fishing industry” on the southern island of Mindanao where abandoned fishponds had destroyed mangrove forests.

With government backing, Ballon and other small-scale fishermen replanted 500 hectares (1,235 acres) of mangrove forests by 2015, boosting their fish catch and quality of life.

“What was once a desert of abandoned fishponds is now an expanse of healthy mangrove forests rich with marine and terrestrial life,” the award foundation noted.

American Steven Muncy, founder of the Philippines-based NGO Community and Family Services International, was recognised for helping refugees, assisting victims of natural disasters and getting former child soldiers back to school in Asia.