Thyssenkrupp Presses On With Split As Profits Rise 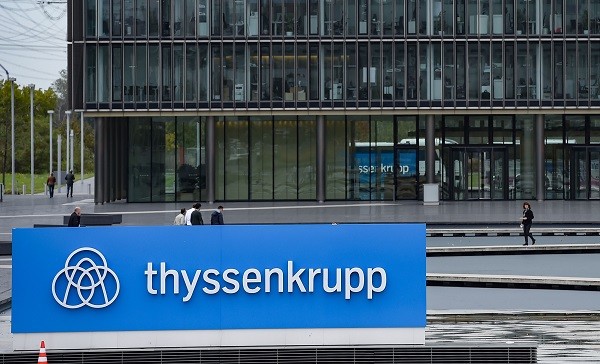 The group said increased sales across all its business areas, notably the elevator business in Europe and North America, contributed to its higher revenues (Photo: PATRIK STOLLARZ/AFP/Getty Images).

GERMAN multinational conglomerate Thyssenkrupp on Tuesday (12) confirmed its earnings forecasts for the full year after increasing profits in its first quarter, while announcing a January 2020 vote on its split into two separate firms.

Net profit at the group rose 69 per cent between October and December, to $153 million.

The latest 50-50 joint venture, ‘Thyssenkrupp Tata Steel’ and will be the second largest steel producer in Europe, after ArcelorMittal after Thyssenkrupp signed a final deal with India’s Tata Steel to establish a long-expected steel venture.

The European Commission’s green light is still needed for the merger.

A major contributor to the fatter bottom line should be “positive effects arising at the closing of the steel joint venture” with the European operations of Indian giant Tata.

Revenues at the steelmaker, whose product range stretches from submarines to elevators and car parts, edged two per cent higher to reach €9.7 billion.

“But the figures also show that we have to keep pressing forward with our performance programmes in all business areas,” he added.

The group said increased sales across all its business areas, notably the elevator business in Europe and North America, contributed to its higher revenues.

But even the standout division saw lower profits as higher raw material costs and tariffs on materials imports into the US made themselves felt.

And the slowdown in production in the car industry following the introduction of new, tougher emissions tests also temporarily reduced demand for Thyssenkrupp’s products.

Although Thyssenkrupp said “economic and political uncertainties are growing” and casting a shadow over business, the group maintained its forecast for 2018-19 of adjusted operating profit above one billion Euros around 30 per cent higher than the previous financial year.

Net profits should also “increase significantly” from the €60 m booked in 2017-18, the group also predicted.

In the group’s broader restructuring, launched last year under pressure from activist shareholders, the group said investors would have a vote in January 2020 on its split into two listed companies.

Of the new twin Thyssenkrupps, one known as “Industrials” will combine the elevator, car components and factory-building businesses.

Its counterpart, ‘Materials’, will group together steel and the shipbuilding unit.

“Both companies are to commence operations at the start of the next fiscal year on October 1, 2019,” Thyssenkrupp said.