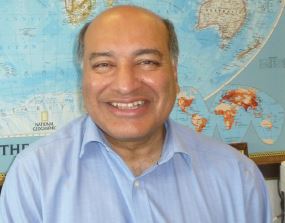 As the high-powered president of the European Bank for Reconstruction and Development since May 2012, Sir Suma Chakrabarti has touched the lives of people in many parts of the world, but especially by investing in women and young people in Eastern Europe, the Middle East and Africa.

Sir Suma, who turned 60 this year, had previously been a high flying civil servant in Whitehall – permanent secretary both at the department for international development and at the ministry of justice.

He announced last year that he would not seek a third four-year term as EBRD president which means he is in his final year of office.

Sir Suma, who was born in India to Bengali parents in 1959 in Jalpaiguri, West Bengal, came to Britain as a small boy, attended the City of London School, read PPE at New College, Oxford, and did his MA in development economics at the University of Sussex.

Sir Suma’s ambition was to increase the number of countries which joined as members of the EBRD and became shareholders and also extend its global reach. He succeeded on both counts.

“When I arrived at EBRD in 2012 we had about 60 members,” said Sir Suma, who was being interviewed in his office in London.

The EBRD headquarters, currently located just behind Liverpool Street Station, will move to Canary Wharf in 2022.

“We now have 71 – both China and India have joined in my time and I am very proud we have managed that. San Marino and Libya have just joined.”

He also wanted to “deliver more in the poorer, less developed markets of EBRD so I am very proud of the very significant increase in the investment