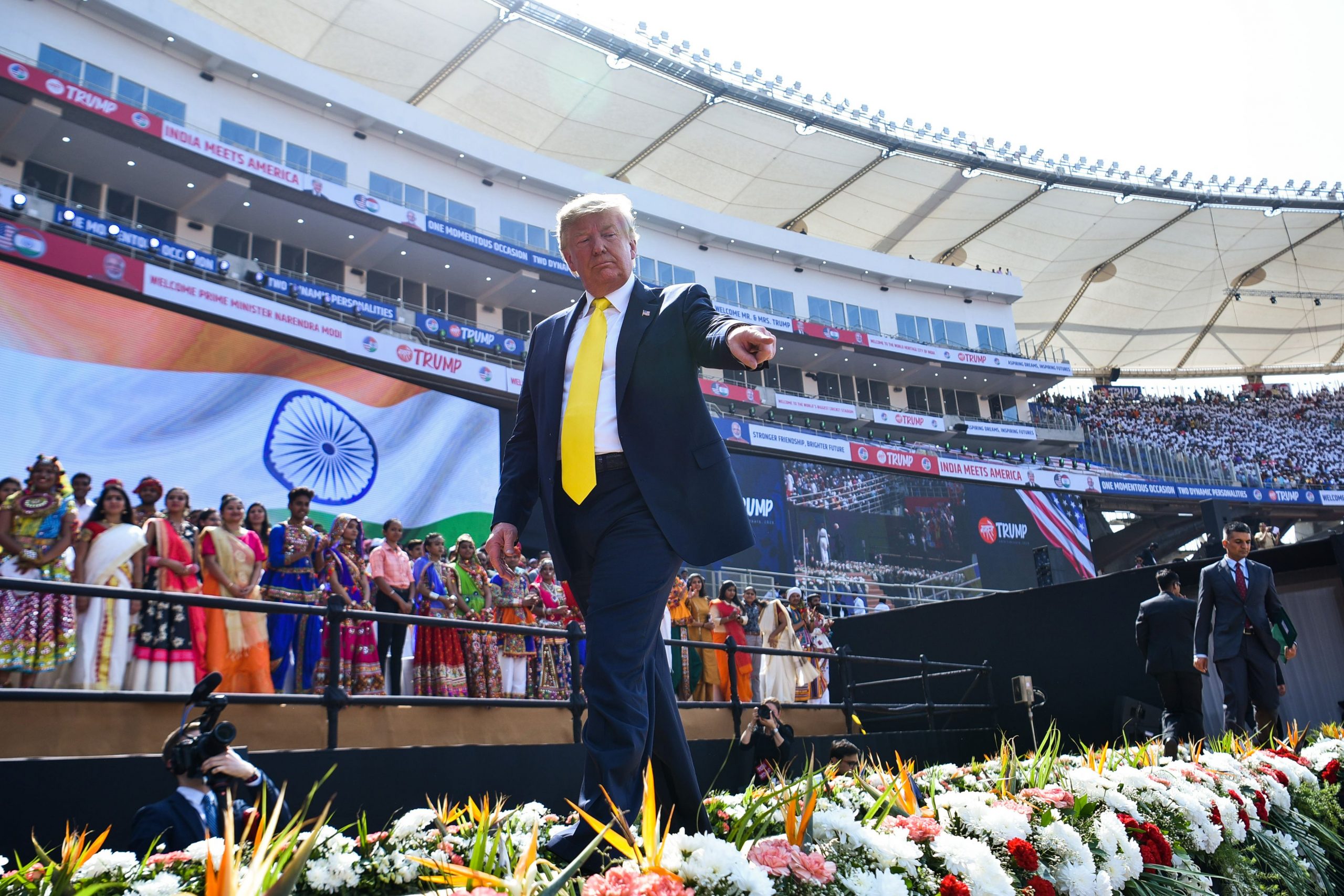 US President Donald Trump leaves after attending ‘Namaste Trump’ rally at Sardar Patel Stadium in Motera, on the outskirts of Ahmedabad, on February 24, 2020. (Photo by Mandel NGAN / AFP)
Follow Us

There is no larger symbol of the global sports shutdown than cricket’s 110,000-seater Sardar Patel Stadium in Ahmedabad, opened by US president Donald Trump, but yet to see a ball bowled.

India’s newest and the world’s biggest cricket stadium lies empty because of the coronavirus pandemic. Where there should be the sound of leather on willow and the roar of the crowd, there is only silence.

Just a few weeks ago, it had been packed to capacity as Trump and India’s prime minister Narendra Modi stood side-by-side in a show of pomp and ceremony for the February 24 inauguration.

Eclipsing Australia’s 100,000-capacity Melbourne Cricket Ground, it was rumoured to be in line to host the final of this year’s Indian Premier League, the world’s richest Twenty20 tournament, watched by millions worldwide.

But then came COVID-19. The pandemic has brought the sporting world to a grinding halt with massive events including the Tokyo Olympics, football’s European Championships, golf and tennis majors, and the glitzy IPL postponed.

“There was hardly any time between the Trump event and the pandemic,” a senior Gujarat Cricket Association official told AFP on condition of anonymity, adding that once cricket resumes, the stadium could be ready “in double-quick time.”

“Just five percent work is remaining and it just needs the finishing touches,” the official added.

The Board of Control for Cricket in India (BCCI) has pushed back the IPL from its original start date of March 29 to April 15, but with the number of coronavirus cases in India exceeding 5,000 and still rising, pressure is growing for it to be shifted again, truncated or scrapped.

The $100-million, circular venue, promises unobstructed views and has state-of-the-art facilities including an Olympic-sized swimming pool as part of a multisports complex.

Next door, a refurbished venue on the site of the former 49,000-capacity Motera Stadium will serve as a venue for cricket, football and hockey.

Critics have charged that it is another “white elephant” vanity project in Modi’s home state, following the completion of the world’s largest statue there in 2018 – also dedicated to independence hero Sardar Patel.

Modi was Gujarat chief minister for 13 years until 2014, and revamping the former Motera stadium had been long a pet project.

Home minister Amit Shah, a close ally, headed the Gujarat Cricket Association till last year and his son Jay Shah is the secretary of the BCCI, the world’s richest and most powerful cricket board.

Despite cricket being wildly popular in India, domestic first class matches — and even some international Test matches — are often played to near-empty stadiums.

The only matches guaranteed to attract big crowds are IPL games and one-day internationals — and even then it depends on the quality of the opposition.

The nation of 1.3 billion people already has more than a dozen stadiums capable of hosting international cricket, although in the off-season they can be used for other events.

“You are left wondering whether it is a rock concert venue, (or) is it a cricket stadium?” ESPNcricinfo senior editor Sharda Ugra told AFP.

“I would have hoped that there would have been some analysis on the kind of grounds that India needs now.

“We have a lot of these giant grounds in which you have one international match in two years.”