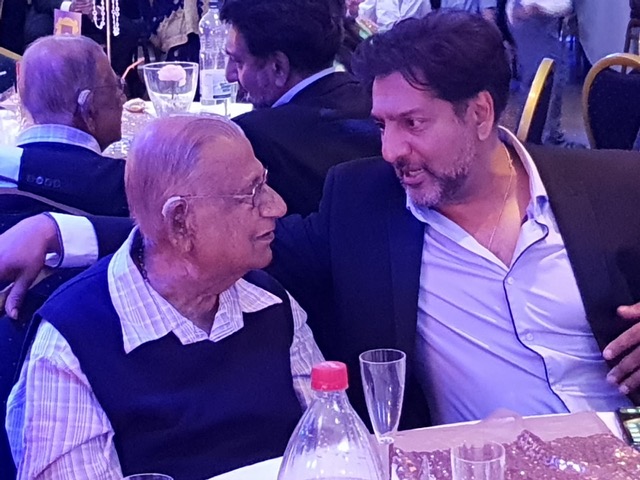 LIFE WELL LIVED: Nitin Ganatra with his father at an event.

MY FATHER, Jayantilal Kakubhai Ganatra, who passed away last month aged 91, has left a true legacy of kindness, selfless service and passion.

There will be a massive void in our lives now that he has gone.

He was one of the last pioneers who lived in Kenya, and then made the journey to the UK through difficult circumstances, to provide a better life for his children.

His adventures took him across Kenya, Uganda, Tanzania, Nepal and Singapore as well as his annual trips to India. These took in his love of food, different cultures and animals.

Having grown up in Kenya, he loved watching wild animals and often took the village families to watch hippos, rhino and giraffe. He was also a supporter of the WWF [World Wildlife Fund charity].

My father held immense knowledge and made himself available to anyone who needed support or guidance. He instilled principles of equality and kindness, and asserted that regardless of religion or colour, we are all human.

For us children, one of the biggest lessons from Papa (as we called him) was selflessness. His devotion to charity was immense. Education was hugely important too, and Papa used his pension to support young people in India by paying their fees throughout their education.

So much of my father has been passed on to his children. I have learned from him to be independent in my way of thinking, never to follow the crowd and to choose one’s own destiny in life despite self-doubt and fear.

Just as he started work aged 15, to cut his own path as self-taught businessman, I too have inherited a passion to break new ground.

At 16, I knew where I was heading. I became an actor at a time when it was frowned upon by the (Asian) community and when it was difficult to succeed as a brown face in the West.

Like my father, I have a strong work ethic and even stronger belief that the world is open to follow one’s passion.

When I told him I was going to be an actor, he was worried, of course – any parent would be – especially as it was an unknown.

However, he did not stop me. I guess I am my father’s son in that I’m stubborn enough to believe anything is possible if you work for it.

It is through him that I have learned discipline and set high standards and expectations of myself, and to be the best I can in any situation.

It was a moment of great joy and pride for me when a Mercedes Benz (his favourite car) was sent to collect both him and my mother from Coventry to bring him to Leicester Square in London for the premiere of Bride and Prejudice.

My father told me later how proud he was of me. And yet, he has always kept me humble and grounded. Notwithstanding the glamour and glitz of my industry, I would return on a weekend to help both him and my brother in our family shop.

I never forgot where I came from and how much my parents struggled to achieve stability in this country. For that, I am truly grateful.

My father believed in community, family, fairness and truth. He was a leader. He is the last of his kind. And he will be missed. Thank you for all you have taught us, dad.