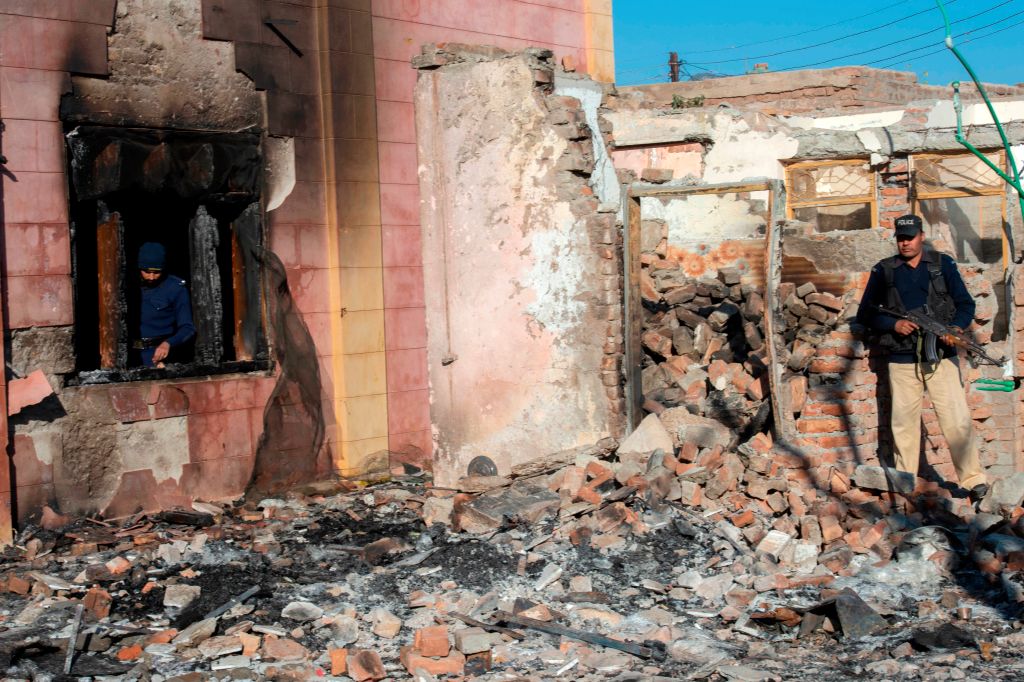 In this file photo, policemen inspect a burnt Hindu temple a day after a mob attack in a remote village in Karak district, some 160 km southeast of Peshawar on December 31, 2020. (Photo by ABDUL MAJEED/AFP via Getty Images)

DOZENS of people attacked a Hindu temple in central Pakistan over blasphemy allegations, police said Thursday (5), in the latest incident of religious-fueled violence targeting a minority group in the Islamic republic.

Police said the mob attacked the temple in Rahim Yar Khan in Punjab province Wednesday (4) afternoon following the release on bail of a young Hindu boy accused of blasphemy.

“Some 70-80 protesters then attacked and smashed the windows of the temple,” Ahmed Nawaz, a police spokesman from the district, said.

The boy had earlier been arrested over rumours that he committed blasphemy, a hugely sensitive issue in Pakistan where insults against Islam and the Prophet Mohammad carry harsh prison sentences and the death penalty in some instances.

Videos circulating on social media showed a group of men ransacking the temple, using iron bars to destroy portions of the property.

“The damage isn’t too extensive. The building has been partially damaged,” said Riasat Ali, a local administration official, adding that security forces had been deployed to protect the local Hindu community in the area.

Muslims make up 97 per cent of the population in Pakistan and Hindus compromise around two per cent.

The attack was the latest in a string of assaults on Hindu places of worship in recent years, including an attack late last year that saw around 1,500 people overrun and set fire to a temple in northwestern Pakistan.

The uptick in violence comes as leaders in Pakistan and India have been locked in an increasingly harsh war of words, with both sides accusing the other of inflaming religious sentiments to target minorities in their respective countries.