Man arrested after protest outside Hindu temple in UK’s Birmingham. 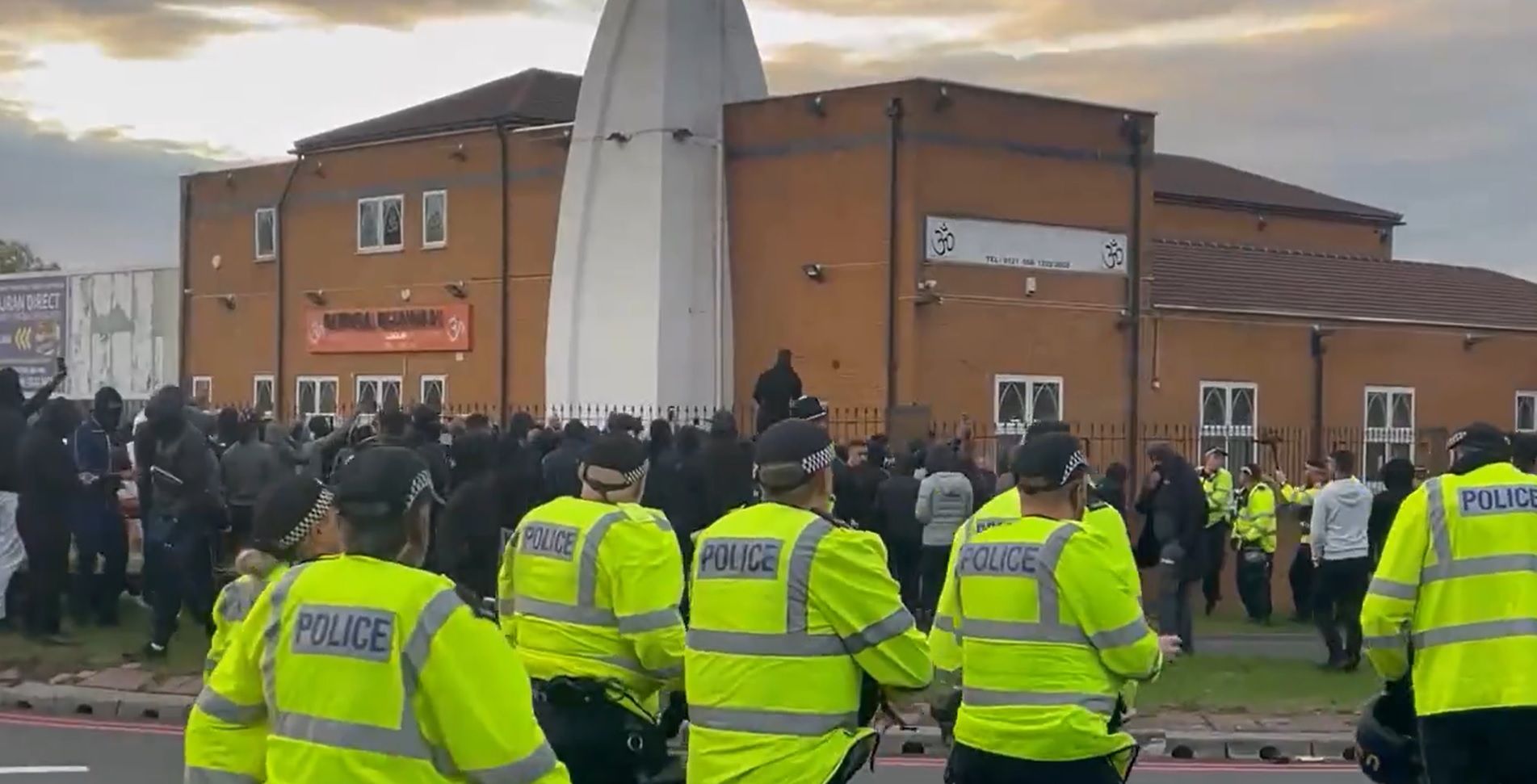 A minor disorder during a protest outside a Hindu temple in the city of Birmingham involving fireworks targeted at police officers has resulted in a man’s arrest and stop and search powers being deployed, UK police said on Wednesday (21).

Videos of Tuesday’s (20) protest outside Durga Bhawan temple on Spon Lane in Smethwick area of the West Midlands city were circulating on social media overnight, with groups of masked men seen shouting and hurling items. Police officers could be seen holding and pulling some of these masked men trying to scale the temple fence.

Following a protest gathering in Smethwick last night (September 20), there was some minor disorder and one person was arrested, West Midlands Police said in a statement.

Hindu-Muslim tension in the UK spreads from Leicester to Smethwick – a large number Muslim youths protesting outside a Hindu temple in Smethwick, heavy police presence helped to disperse the crowd. pic.twitter.com/S4GwOdODUo

The 18-year-old man arrested on suspicion of possessing a knife remains in custody for questioning on Wednesday.

We are continuing to provide a visible police presence, working closely with faith leaders and partners across the community to provide reassurance. We will continue to monitor the situation locally and across the region, the police said.

Local media reports said that people claimed there were damages to the Hindu temple and saffron flags were removed from outside the place of worship.

Meanwhile, leaders of Hindu and Muslim communities in Leicester have urged for peace and harmony. They also requested an immediate end to the violence.

The ongoing clashes in Leicester have led to nearly 50 arrests so far. It was sparked by a dispute after Pakistan beat India in a cricket match in Dubai last month.

According to police, some of those detained were from Birmingham and 25 officers and a police dog were injured due to the violence.

“There are reports of incitement to hate being targeted at those of Muslim and Hindu faith, which is being shared on social media to cause fear. Places like Facebook and via WhatsApp designed to ‘entrap’ members of the local community to attend a protest, sparked by hate,” she wrote.

Recently, the Muslim Council of Britain (MCB) has stated that ‘hatred of any kind has no place in our society’.

Meanwhile, the city’s Federation of Muslim Organisations (FMO) also called for care in the language used and the dangers in ascribing the trouble to one group or another.

Jonathan Ashworth, Labour MP for Leicester South,described the recent events a ‘dark episode’ in a city which is famous for its diversity.

“Attempts to sow division including by those with extremist views will fail and are totally condemned across Leicester. We utterly condemn violent incidents on our streets; marches with provocative slogans inciting hate; attacks on places on worship, symbols or religion,” he was quoted as saying by The Telegraph.

“It has always been the case – re-confirmed from my conversations across communities – that the vast majority of Leicester’s Hindu and Muslim communities are law abiding and continue to enjoy longstanding good relations.”