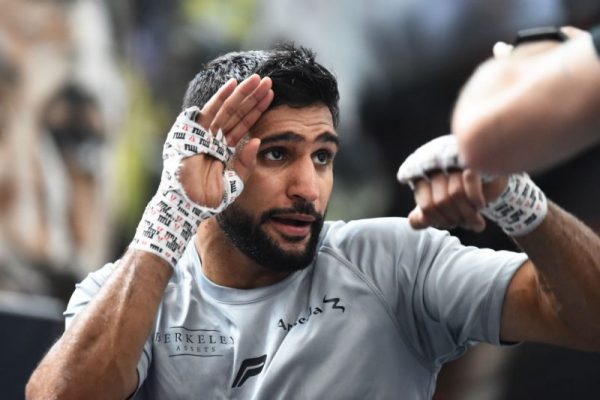 THE thought of not boxing scares Amir Khan as many predict the grudge fight against Kell Brook on February 19 will be his last. But the former world champion is not sure and will take a call after the bout.

“It does scare me, it does because boxing is what I do,” he told Sportmail in an interview.

“Boxing is everything to me. It keeps me occupied, keeps me focused. If I didn’t have boxing in my life, I would be quite lost.”

Currently training in Colorado Springs and his training base at the foot of the Rocky Mountains. With 39 fights from his 17-year of professional career, Khan believes he is not done from the ring yet.

“I’ve always said that I don’t want boxing to retire me. I don’t want to be one of them fighters. I want to retire from boxing. I’m just going to go in there and enjoy it. I really feel while I’m in camp now that I’ve got a few fights left in me, though I don’t know what the wife’s going to think about that, or my kids!” said Khan, who turned 35 last month.

The animosity between Khan and Brook is well-known since both the British boxers emerged from the amateur scene. But it was Khan who overshadowed Brook after returning from 2004 Olympics with an unlikely silver medal.

Earlier, there was never an opportunity for the boxers to meet in the ring but now in the twilight of their careers they can settle the debate of who the best.

Khan said: “I was very lucky to have the nation behind me when I came back from the Olympics. Made it in America, travelled, I made a lot of money from boxing. He’s always felt like he was overshadowed.

“The truth is, the fight never happened earlier because I was campaigning in America and he was in the UK. I didn’t think it ever needed to happen, but with the fans still talking about it, I couldn’t let it go any longer. I couldn’t leave the sport without taking it.”

Khan is all set for the bout and is getting ready for any style of attack Brook would be throwing at him. He has picked Brian McIntyre, Terence Crawford’s trainer, to prepare for the fight on February 19.

“But if he wants to try to box on the back foot, then fine. The way these guys are training me over here, we’ve got two, three different sparring partners, one coming at you all the time, pushing you back and giving you a war. Then one guy who is a little bit more skillful and another guy who’s a bit of both. It’s tough, but it means I’ll be ready for whatever he brings to the table,” Khan explains.

He is nowhere connected to the racism controversy that has engulfed English cricket following Azeem Rafiq’s revelations of his racist harassment at the Yorkshire County Club. But British-asian athletes in the past have raised the topic of racism with him and their experiences.

“They say, ‘We’re Asian, I don’t think we’ll get picked.’ I think that’s something in their mind. If you’re the best at your sport, you’re going to get picked because what Britain wants is champions, medals. Look at my cousin Sajid Mahmood, he played cricket. He was picked for England. It was down to hard work and family support. His father always took him to the cricket games. Met the right people.

“My father did the same thing. Took me everywhere. Paid for the gym, kit, training camps abroad.

“You have to dedicate yourself, but your family have to dedicate themselves too. A lot of Asian kids might not get far because their family might not support them because they would rather have them go into education and get a solid job. Sport is a risk and they don’t want to take it. That’s why we don’t see many Asian youngsters out there.” Khan says this while making reference to parents older than him.

But on the contrary he adds, ‘the new generation supports our kids differently because we’ve seen what sport can do.”