THERE are more leading British Asian comedians than ever before, and most are following in the giant footsteps of path-breaking funny man Paul Chowdhry.

The stand-up giant has blazed a trail of fire with his explosive brand of humour and incendiary observations of everyday life, which has made him one of the hottest live draws. He is currently in the middle of his latest intriguingly titled stand-up tour Family Friendly Comedian, which is playing to packed houses around the UK and has live dates until the end of this year.

Eastern Eye caught up with the in-demand British comedy king to discuss his latest show, amazing laughter-filled journey, inspirations, magnificent beard, and if Zayn Malik is welcome at his shows.

How do you feel being back on tour after 18 months of Covid lockdown?
Yeah, it feels good to be back out there. It has been a tough time in all our lives and for many of us it’s kind of like coming out of a war.

How has it been being back in front of a live audience?
Yeah, it’s good. I was doing shows on Zoom, but there’s nothing like live comedy and that is what I am best at. Shows on the internet don’t really compare to an experience in a room, for someone who can perform stand-up comedy.

Does the huge success of your last tour Live Innit put pressure on you?
I have done seven to eight tours now. This is the fourth in terms of recorded tours. The breakthrough one was What’s Happening White People in 2012, and then PC’s World in 2015 and Live Innit in 2019, which was released on Amazon Prime around the world. I wouldn’t say it puts pressure. I just try to improve on every show and do different things because my life moves along. If your life moves on, your comedy does too. 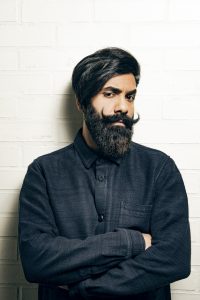 What can we expect from your new show Family Friendly Comedian?
I am talking about a lot of things in this show, including what we just lived through. How I have been dealing with getting recognised, where I am in my life right now, and how we have reached this point in human history.

Do you think you are a family friendly comedian?
I’ve always been a family friendly comedian! A lot of Asian comics have come through, but when I started in mid-1998, there was literally no one back then and just a handful of us. There was me and Russell Peters, a Christian Canadian Indian. I’m a British Sikh Indian and speak Punjabi. So, the comparisons were made with two very different people. Now the doors have been opened and there’s a comedy circuit for Asians, like the black circuit was there. Now, there are a lot more breakthrough acts, I may well have inspired. So, I am family friendly.

A lot of leading British Asian comedians have cited you as their hero. How do you feel about that?
I try not to think about it! Back in 2012, I did Live At The Apollo. When I did that BBC show, I was already at the point where I was recording my first DVD, so the day before I recorded Live At The Apollo, I had already sold out the Apollo in my own right. The general booking scheme of that show was new comedians who need a platform, so in future years, they may sell out the Apollo. Do you remember what your parents used to say, that you have to work 10 times harder than them? That is when I finally understood what it meant. You have got to be there, before you can get it. To answer the question, it feels good, and I am humbled by it.

Do you think it’s easier for those who followed in your footsteps?
Now it’s different! They’ve got commissioners, who have to hit quotas and get people of ‘diverse’ backgrounds. They have that booking system, which wasn’t around then. Probably more so in 2012.

How was it when you started?
Mid-98 when I started and the early 2000s, agents would say there’s no room and audience for you. In other words, Asians ain’t gonna come to the shows. I was British, born in London and went through the same school systems as my white counterparts and stuff, so what’s the difference? I’m performing to a room full of white people, just like they are, so why the block and obstacles?

Would you call yourself controversial, fearless, honest or all three?
Just honest! Comedy is at a strange place, where there is political correctness. People say you can’t say certain things anymore, but you can, because I do. It comes from a place of honesty and I’m not overstepping the mark. What I am talking is the truth. I’m not being discriminatory to any race, gender, sexual identity, nothing. It’s that if you come to see my show, these are jokes.

Some consider it controversial…
It’s considered controversial because the Asian crowds hadn’t really seen comedians. The Goodness Gracious Me lot did a few tours but wouldn’t really do stand-up. Richard Pryor, George Carlin, Sam Kinison, Jackie Mason were doing stand-up until they died. I am a true comic and stand-up. What happens around it for me is a bonus. Like acting in Cruella with Emma Stone, The Cleaner with Greg Davis and Helena Bonham Carter or Patrick Dempsey’s drama The Devils. Comedy is in my blood, as a stand-up.

Did you pick up any extra skills during lockdown?
Comedians are generally lazy. The only extra skill I developed was trying to survive. I wish I could say I learned all these extra skills, but maybe I learned how to be even more honest on stage because it has been quite a bad time during this pandemic. It was also a bad time for me and my family, so for me to get through it and get back on stage again was the toughest thing.

What inspires you as a comedian today?
I would say just general life and the state of the country, which I talk about in the show. I’ve never really been into politics, but you got no choice now. When you look at the way the country is being run by the government and Boris Johnson, it is like they do things three months after they are supposed to. You can see it happening with the petrol crisis. It shouldn’t be at a point where the country has come to a standstill. The same with the pandemic; it didn’t have to get to a point where it was too late and there’s already a crisis. This government is just damage limitation.

What’s the plan going forward? Like I would love to see you have your own sitcom?
Yeah, I mean so plenty of people have sitcoms now, when they haven’t even done a tour yet, whereas I have done seven to eight tours. I’ve got a podcast out there. I’m doing more acting now – for some reason people ask me to play parts in shows a lot.

Do people think you may be a little bit too dangerous for television because of your colourful language?
I do corporate shows and am doing a bunch of Muslim charity shows. They all have families there, including children and parents, and it is completely clean. When you see me in a comedy club with a bunch of comics of different races, you will realise that what I do isn’t controversial. But for Asians, it becomes controversial because I swore in Punjabi, and they have never seen it before. I was the first to be really saying these words in different languages and they couldn’t believe I was actually saying this publicly. The stuff I talk about is what we speak behind closed doors. But when we speak in public it is controversial. But we all say it.

The name Dave comes up in your set a lot. Do you know anyone called Dave in real life?
Yeah! I have met plenty of people called Dave. I remember when I said ‘what’s happening white people’ back in the day, and that was controversial. Now you could name three or four Asian comics that use these kinds of phrases in their acts, and say it online, but back then they were shying away from it. I opened the doors to say those things. It’s just like when Richard Pryor was saying certain things, or Red Fox, who was prior to Pryor, saying these things as a black comic. People couldn’t believe what they were seeing. Is a black person saying these things about white people? I was an Indian guy from London talking about our upbringing and Dave.

What is the reaction from other white comics?
I remember Dylan Moran, the very respected comedian who had done Black Books, came up to me in Montreal, where I had headlined and said, ‘I have never seen an Asian guy on stage do this kind of Dave thing’. Now you can see three or four comics of ethnic backgrounds doing that. You can see the stuff being lifted quite a lot. You saw me doing this stuff years ago, Asjad.

You famously did hilarious sketches as Zayn Malik. Would you invite him to your show?
I don’t think he would come. I spoke about that on Live Innit as well. There was a big chunk on the Zayn Malik situation, when I met him at an award ceremony and got pushed by his security for saying hello. Then I made those videos and his sister started trolling me on Twitter, saying you’re only famous because of Zayn Malik. What? I have been doing comedy since that guy was a baby. I literally only did a handful of videos when I was bored. I shot, directed and edited them, and played all the characters. Obviously, he had seen them. He’s very welcome to come to the shows. I can get him tickets for the Hammersmith Apollo with his family if he wants.

What is the secret behind the magnificent beard that you sport?
You have seen me in all the incarnations, Asjad. You have to reinvent yourself. I used to watch
Madonna and she always reinvented herself, to get longevity. I have talked about when you are white, you are a hipster, with us its slightly different. I might have to make a change soon. Maybe just keep the moustache. It’s the moustache that is the hardest part and not the beard. I haven’t even got the biggest beard amongst my friends. Reena, she has got bigger beard than me, Priya, she has a better beard than me, so quite a few of my friends have better beards. But I feel I have got a better moustache.