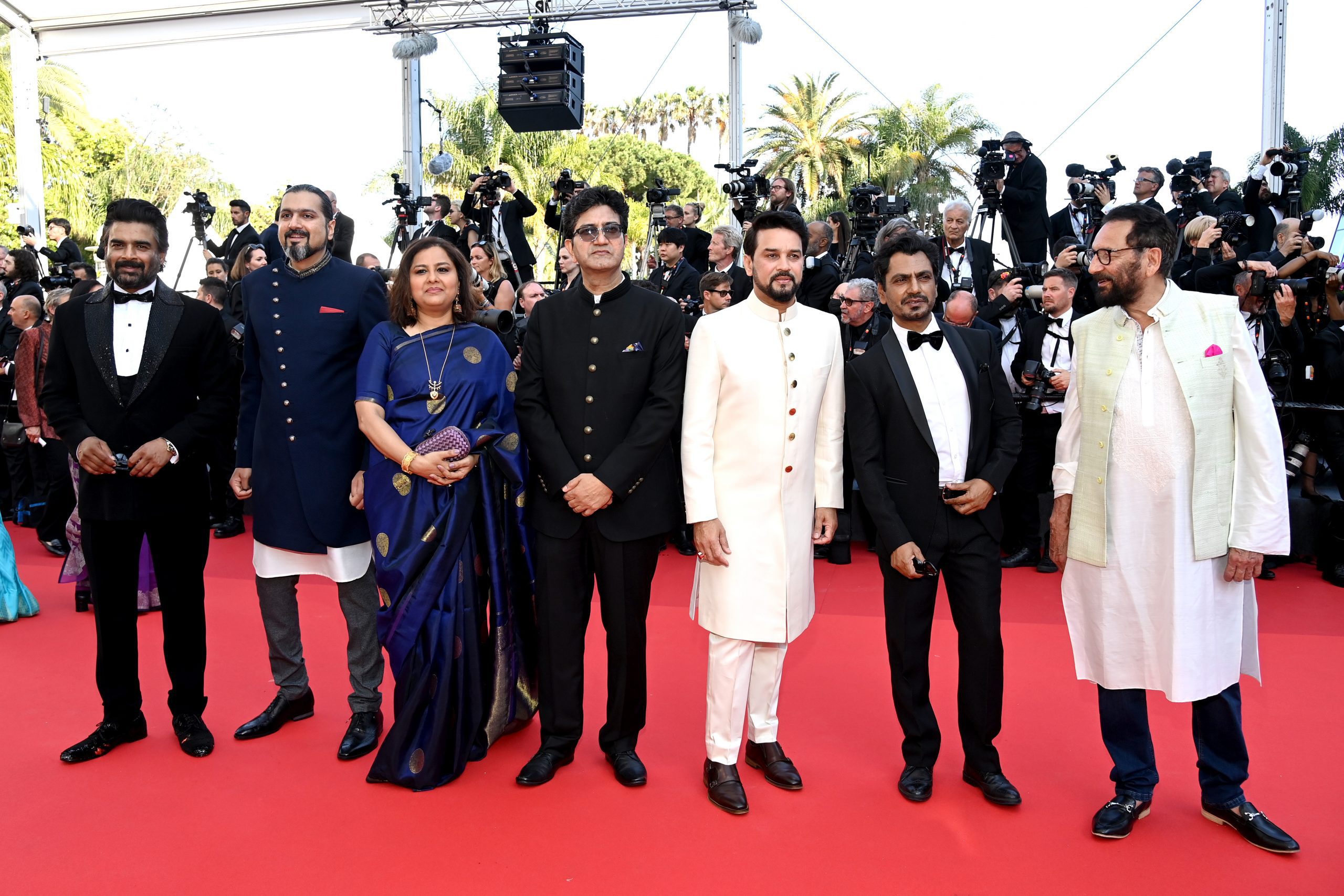 In a star-studded presence on the Red Carpet, Union Minister of Information & Broadcasting Shri Anurag Thakur led the largest ever Indian official delegation of eleven celebrities walking together on the inaugural event at the Cannes Film Festival.

The Union Minister is leading a strong Indian delegation to propagate India, the land of storytellers as the ‘content hub of the world’ and preferred ‘post-production hub’ for global filmmakers.

In a historic moment for Indian folk arts, Shri Mame Khan became the first-ever folk artist to open a Red Carpet for the Indian contingent at Cannes ever.

Putting on display the diversity and uniqueness of Indian cinema, the glamorous red-carpet contingent comprised film celebrities from across India. Consisting of eleven members walking towards the legendary stairs of the Palais des Festivals, the delegation carried all the symbolism of India’s ambition to become a global cinema hub.

The ten celebrities that accompany the Minister feature three musical maestros, who have been raising India’s flag on the international scale, and renowned filmmakers and actors from Indian Cinema who represent a kaleidoscope of diversity from various regions, languages, mainstream and OTT led cinema. India the land of storytellers is setting a beautiful narrative for the world through its strongest ever red-carpet presence at Cannes.

Among the stars was actor Nawazuddin Siddique, a regular at Cannes. His raw, powerful acting and the realism of his movies, such as The Lunchbox or Gangs of Wasseypur, have particular resonance among European audiences and signal that India is capable of producing movies catering to a wide range of sensitivities.

The presence of superstar music composer AR Rahman in the group displayed the intent of the Indian delegation to pay tribute to cinematographic music – for, maybe more than anywhere in the world, soundtracks play a massive role in the DNA of Indian cinema. Showcasing the musical eclecticism of the country, different genres were represented on the red carpet. Ricky Kej, an internationally acclaimed new age music composer and multi-Grammy Award winner, represented a more contemporary side of India, while Mame Khan, a film composer and folk singer from Rajasthan, personified the influence of folk culture on Indian cinema. Prasoon Joshi, a lyricist who penned innumerable evergreen film songs, and is now Chairman of the Central Board for Film Certification (CBFC), was also present.

Ambassadors from different regional cinemas were included in the delegation, sending the signal to the world that India – which boasts of 25 regional film industries – has many different flavours and styles to offer in terms of film production. This year, cinema from the south was in the spotlight. R. Madhavan, an actor, and producer who has been involved in movies shot in six different languages (Tamil, Telugu, Malayalam, Kannada, Hindi, and English) was a good example of the staggering diversity of Indian cinema. Two Telugu cinema superstars, Tamannah Bhatia and Pooja Hegde, also made their dazzling appearance as part of the delegation.

Shekhar Kapur, director of legendary films such as Mr. India, and now chairman of the Film and Television Institute of India (FTII), as well as Vani Tripathi Tikoo, actress and member of CBFC, also took part in the Indian delegation.

Delegation members in order of appearance on Red Carpet

Cannes Film Festival, which gathers every year the who’s who of the global movie industry, will take place from May 17th to 28th, 2022, and will be the occasion for Indian delegates to take part in various events and high-level meetings.