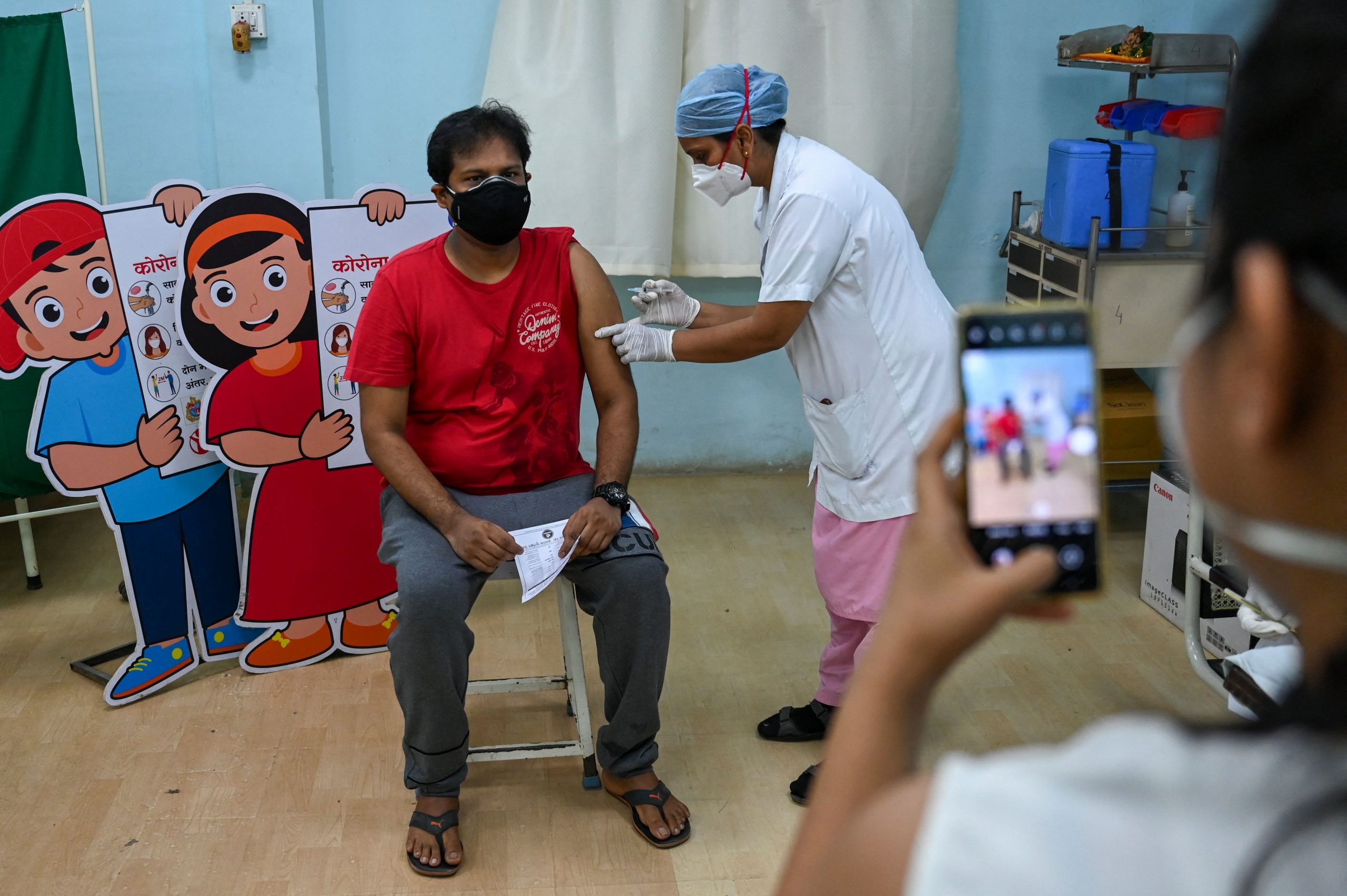 A man gets inoculated with a dose of Covishield vaccine against the Covid-19 coronavirus at a vaccination centre of the Rajawadi Hospital in Mumbai. (Photo by PUNIT PARANJPE/AFP via Getty Images)
Follow Us

India’s devastating Covid-19 surge further accelerated on Saturday with more than 400,000 new cases in 24 hours, as vaccinations opened to all adults despite shortages of shots.

The hard-hit capital New Delhi meanwhile extended its shutdown for another week while top US pandemic advisor Anthony Fauci said that India should go into a national lockdown for “a few weeks”.

Two months ago the health minister said India was in the “end game” of the pandemic as it sent millions of vaccines abroad, but now exports have stopped and people are desperate to be inoculated.

A crowd of people formed outside one Delhi hospital on Saturday — one of very few offering shots to those under 45 years old.

“There are so many people that are getting sick… so we just wanted to be here as soon as possible,” one of those waiting, Aadya Mehta, 25, told AFP.

Until now, only “frontline” workers like medical staff, people over 45 and those with pre-existing illnesses have been given the AstraZeneca or Covaxin shots.

But even this more modest programme has stumbled, with some areas running out of jabs and others throwing them away because of lack of demand, in part because some people are scared to leave home during this recent surge.

So far, around 150 million shots have been administered, equating to 11.5 percent of the population of 1.3 billion people. Just 25 million have had two doses.

With the expansion of the rollout to all adults, around 600 million more people are now eligible to get vaccinated, but many states said they have insufficient stocks.

Millions of younger people terrified by the current situation and desperate to get inoculated registered on the government’s digital platform.

But very few of them have been given appointments and only around half a dozen of India’s 28 states began vaccinating people under 45, and in many cases only a token scale.

“Half my family is positive, so everybody wanted us to get vaccinated,” data scientist Megha Srivastava, 35, told AFP outside the Max clinic, one of three private hospitals in the capital vaccinating younger people.

“It won’t completely protect us, but it will ensure that even if we get infected, we’ll recover,” she said.

Further confusion has been created by the government’s decision to ask states and private hospitals to order vaccine supplies on their own.

“We have contacted Serum Institute of India that has said they will be able to provide doses only after six months,” DS Rana, chair of the Sir Ganga Ram Hospital in Delhi, told the Hindustan Times daily.

C.K. Bakshi, a doctor at one government hospital, said there was “no issue with supply” and was vaccinating almost 300 people a day. But it did not have government permission to jab under 45s, she told AFP.

In Kolkata, Rupak Barua, president of the Association of Hospitals of Eastern India (AHEI), told AFP that “confusion reigns”.

“Do you want to control the epidemic, save lives or both? If you want both you’ll require a huge amount of vaccines. And we don’t have it,” John told AFP.

He and other experts say that given the shortages, and its colossal population, India should have a much more targeted policy, concentrating vaccinations in hotspots.

Gujarat is among the few states to have said they would do so, with chief minister Vijay Rupani saying Friday that vaccinations for over-18s would happen only in the 10 worst-hit districts.

Fauci said in an interview with the Indian Express published Saturday that India was “in a very difficult and desperate situation” and that it “absolutely (has) to get more people vaccinated”.

Russia on Saturday became the latest country to send aid, with the first shipment of 150,000 Sputnik V vaccines arriving by aircraft.

Indian firms also have deals to produce millions of doses of other vaccines including Sputnik V and Johnson & Johnson’s single-dose vaccine, but it could be months until these are deployed.