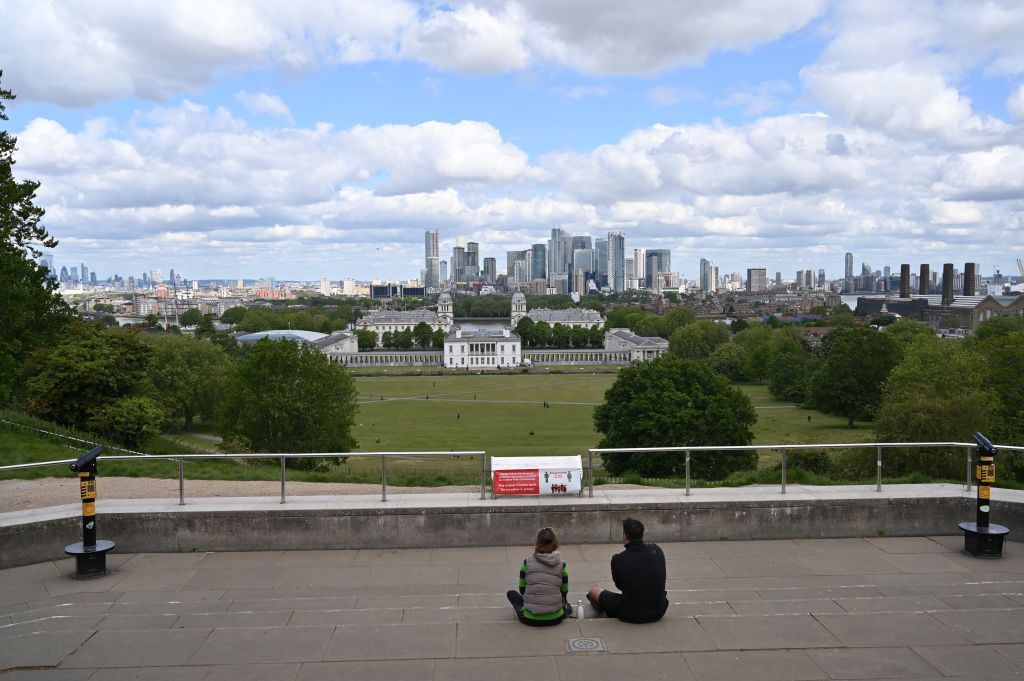 A couple sit on the viewing platform with Greenwich Park and the office buildings of the financial district of Canary Wharf in the background in London on May 14, 2020. (Photo: GLYN KIRK/AFP via Getty Images)

A NEW scientific modelling suggests that London is currently registering not more than 24 Covid-19 cases a day.

Research by Public Health England and Cambridge University found that the capital’s “RO (R-naught)”, or reproduction rate, has decreased from 2.8 before the lockdwon to 0.4.

“If cases continue to decrease at the current rate, the virus will be virtually eliminated in the capital by the end of the month, raising questions about whether the strict lockdown measures would need to continue,” said The Telegraph.

According to the study, every 10 virus carriers were likely to pass on the infection to four people.

Currently, the volume of new cases in London is halving every 3.5 days.

While about 12 per cent of England’s population has already been infected, about 0.63 per cent of cases end in death due to Covid-19 complications.

The modelling suggests that London’s daily death toll could drop to a “consistent level of zero in three weeks”.

Analysts, however, have cautioned about a “second wave” of infections, and also pointed to risks of the virus spreading due to increasing rush in public transport after the easing of lockdown restrictions.

Meanwhile, Canary Wharf has drawn up detailed plans to bring bankers, accountants and lawyers back to the financial district as the coronavirus pandemic eases, the Financial Times reported on Friday (15).

The London estate, home to the European headquarters of Barclays, Citigroup and HSBC and many other businesses, is issuing new guidance to tenants this week, the FT said.

Canary Wharf, home to the likes of Barclays, Citigroup, HSBC and Refinitv, is one of the most powerful financial citadels on earth. Its gleaming Manhattan-style skyscrapers soar above some of London’s poorest social housing blocks.

The newspaper said signs will tell workers they should not pass on escalators, while heavy footfall routes around malls and offices are being separated into one-way flows to ensure social distancing. Furthermore, hand sanitiser stations will be placed outside office entrances.

“During the lockdown, we have been living above the shop, and have worked closely with our customers and friends like a family,” George Iacobescu, chairman of Canary Wharf, told the FT.

“Together we have prepared 16m sq ft of offices and public spaces ready for tens of thousands of people to come back safely when they are ready and still to maintain social distancing.”

The company has calculated that with four people in each lift, its office tower at One Canada Square will be able to move 56 people every five minutes per lift bank, which equates to almost 2,700 per hour over the four lift banks.

In the guidance to tenants, Canary Wharf said “travelling on the Transport for London network will be an ongoing concern as social distancing measures force a reduction in capacity, especially during peak periods”.