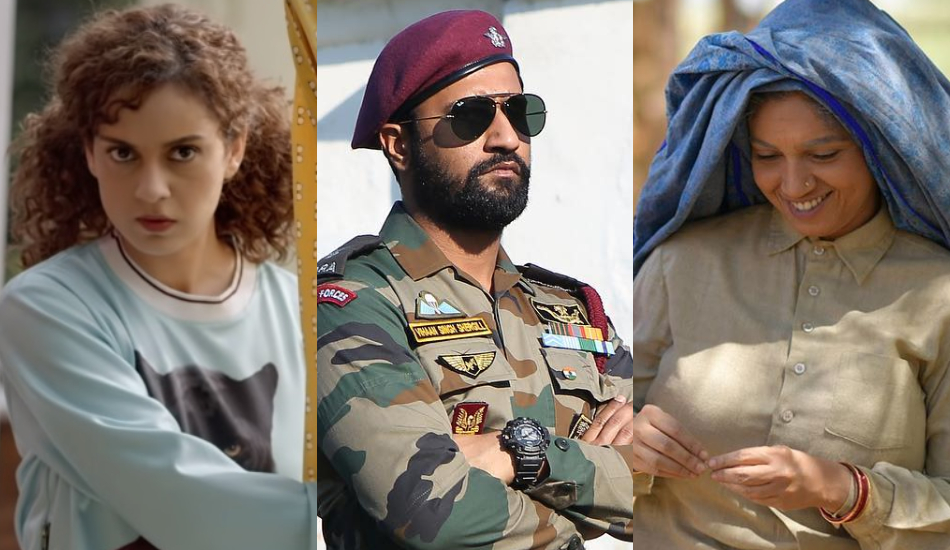 2019 was a good year for Bollywood. We got to see some really good content-driven entertaining films as well as big-budget movies that made a mark at the box office. Well, there were many films that impressed us a lot.

Aditya Dhar’s Uri: The Surgical Strike was based on the real-life incident of Uri attacks that took place in the year 2016. The movie showcased the surgical strike that the Indian Army did on terrorist camps in Pakistan. The film was so well narrated that it kept us on the edge of the seat till the end.

Shelly Chopra Dhar’s Ek Ladki Ko Dekha Toh Aisa Laga is clearly one of the most underrated films of the year. The movie showcased a love story between two girls and how a family finds it difficult to accept their daughter’s sexuality. Shelly Chopra Dhar narrated the film in a very simple yet beautiful way.

When a film directed by Zoya Akhtar, starring Ranveer Singh and Alia Bhatt hits the screens we know that it is going to be a special film. Gully Boy is clearly one of the best films of the year and Zoya totally tried something new this time.

We all had read and heard about Article 15 of the Indian constitution, but Anubhav Sinha had to make a film to remind us about it. Article 15 was a fantastic film showcasing the harsh reality of the rural areas of India.

Vikas Bahl’s Super 30 released after a lot of controversies and multiple changes in the release date. But well, the wait was worth as the film turned out to be damn good. Bahl got the inspiring story of Anand Kumar on the big screen in a very entertaining manner.

People always blame that Bollywood films don’t offer something new, but Prakash Kovelamudi’s Judgementall Hai Kya was a totally different film. It was clearly a brilliant piece of cinema. The film did a decent business at the box office, but it surely deserved to be a blockbuster. Also, we cannot forget the exceptional performance that Kangana Ranaut gave in the film.

We had seen on TV and had also read about the ISRO’s Mars Orbiter Mission. But Jagan Shakti got the story of the mission on the big screen with his film Mission Mangal. It is one of the best content-driven entertaining films of the year.

The Sky Is Pink

Shonali Bose’s The Sky Is Pink is one of the most beautiful films of 2019. It made us smile, laugh and even cry. Based on the life of motivational speaker Aisha Chaudhary, the film inspired us in many ways.

Tann buddha hove hai, mann buddha nahi hota… Well, Tushar Hiranandani’s Saand Ki Aankh got the story of Shooter dadis, Chandro Tomar and Prakashi Tomar on the big screen. In a very entertaining manner, we got to see their inspiring journey, and not to forget, Bhumi Pednekar and Taapsee Pannu performed wonderfully in the film.

In 2014 release Mardaani, we came to know about the child trafficking that happens in India. After five years, the makers came up with the sequel to the film titled Mardaani 2. The movie tackled the issue of rapes that happen in India and it was clearly the most relevant film of 2019.

The year 2019 ended with a bang. Raj Mehta’s Good Newwz as expected made us laugh out loud and even made our eyes teary with the perfect emotional quotient in the film. Also, it was amazing to watch Akshay Kumar and Kareena Kapoor Khan on the big screen after a long gap.