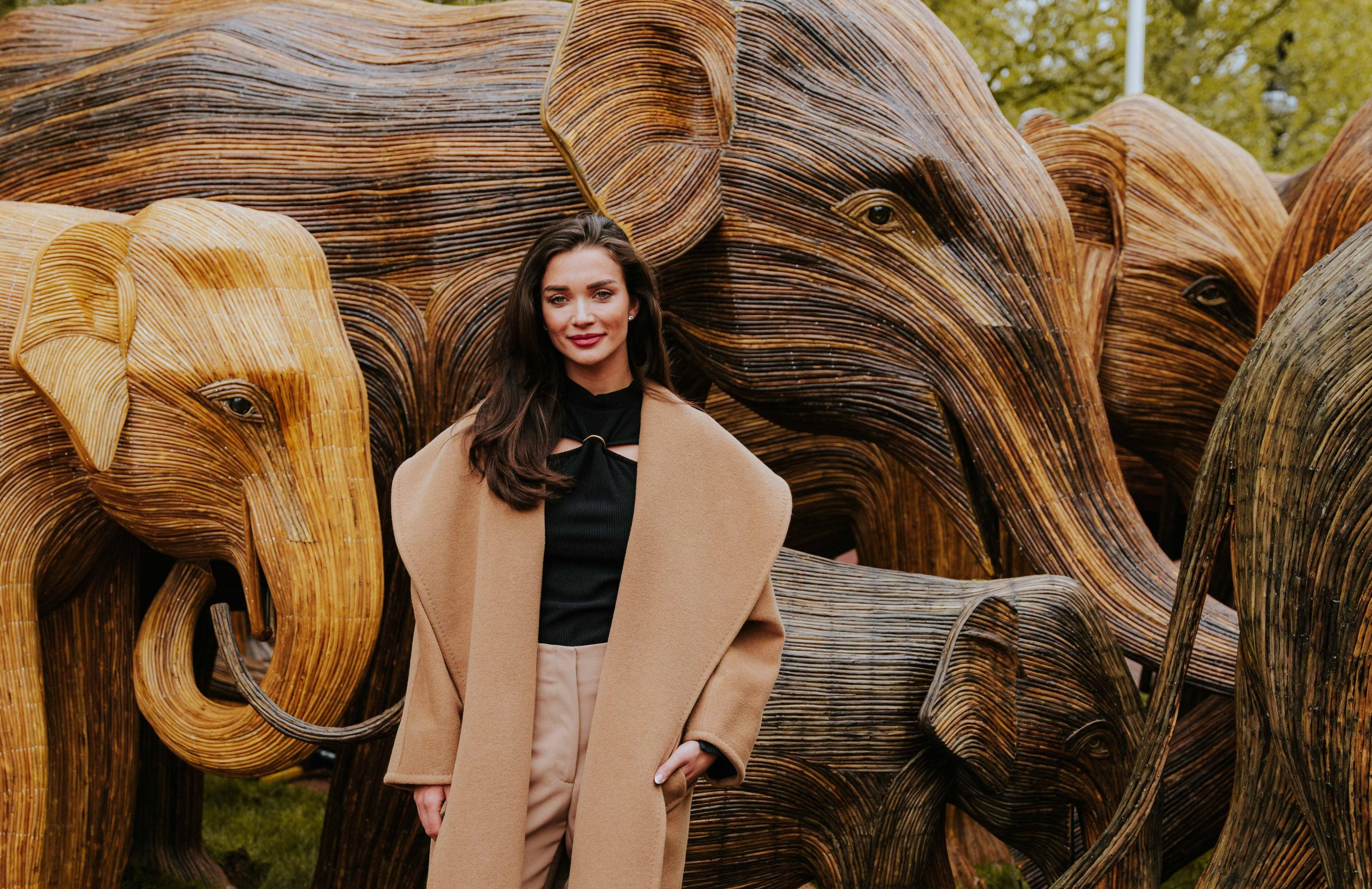 ANIMAL PLANET: Amy Jackson with the life-size elephant sculptures as part of the CoExistence campaign in London (Photo credit: Grant Walker)
Follow Us

ENGLISH actress Amy Jackson has described her love of India – which she calls her “second home” – where she has become popular for her performances in south Indian films.

In an exclusive interview with Eastern Eye, the star said her time in India had been her “most spectacular experience to date”. She also discussed her ambition to carve out a career in the UK and her support for philanthropic projects, including a new campaign by animal welfare charity Elephant Family.

After more than a decade of working in the Indian film industry, Jackson has become a familiar face in the country. She rose to prominence after being spotted by Indian film producers on the Miss Teen World website. In 2010, she was cast as the co-lead in Madrasapattinam, a Tamil language film. Its success catapulted her to superstar status in Asia, and she has since starred in more than 15 films.

Although she has acquired a huge fan following in India, Jackson has not acted in a Bollywood film since 2018. Her last film, 2.0, a Tamil-language science fiction action movie, is ranked as the second-highest grossing release in the country.

Asked if she would be returning to the Indian film industry any time soon, Jackson said, “without a doubt. It’s forever in my blood.”

Despite not currently working or living in India (Jackson lived there from 2012 until 2016, before moving to London), the country will “forever hold a special place in (my) heart”, she said.

She told Eastern Eye, “As a 16-year-old schoolgirl who had never travelled further than Spain on her holidays, to then being welcomed to a country and industry I knew nothing about with open arms says a lot.”

Meeting “so many incredible people” during her time there and being able to appreciate and explore a culture “so vast and rich” at such an early age “transformed my small-town girl mentality”. “It opened my eyes to a whole new way of life. I believe that the most valuable lessons in life come from experiences, and India has been my most spectacular experience to date,” she added.

Jackson is currently taking a break from Bollywood and is spending her time supporting causes close to her heart. Alongside actress Joanna Lumley and TV presenter Donna Air, she recently backed the Elephant Family’s latest campaign.

Last month, the charity set up a herd of 100 life-sized elephant sculptures in London’s Royal Parks. The exhibition, which ends on Wednesday (14), invited the public to discover more about the elephants and the ways in which human beings can coexist with wildlife and better protect the planet’s biodiversity. It is part of the charity’s CoExistence campaign, a response to the increasing overlap between the human and animal world.

During her time in India, Jackson, who is an ambassador for the charity, recalled her encounters with the animal. Although she said some were “breathtakingly wonderful,” others were “heart-wrenching.”

“As a self-confessed animal fanatic, I vowed to do all that I could to help and protect them,” she said. “As elephants are the icons of India, they too have a special place in my heart.”

Jackson was introduced to the Elephant Family in 2018. During her first meeting with the charity, she recalled “falling in love with its morals, ethics, and overall wonder” for the animals.

“They dedicate so much of themselves to preserving Asia’s giants – from securing a network of wildlife corridors, to relocating busy highways that slice through primary forests. Their projects help humans and wildlife more effectively share space and I’m so proud to be part of their family,” she said.

There is an urgent need to support the coexistence of humans and animals across the world, she added. “There couldn’t have been a more appropriate time for the Coexistence Great Migration to take place. We only have to look at how the pandemic kickstarted the ‘anthropause’ (the global reduction in human activity during the crisis) and how nature blossomed as we took a step back and allowed our world to breathe.”

Jackson said she has been “utterly obsessed” with animals since she can remember. As a young girl, she would often plead with her mother to let her adopt dogs and cats from the local animal rescue shelter.

At one point, the family had four pets in their Liverpool home, as well as a couple of rescue ponies, kept at a stable where her mother worked. “I’ve always felt an instant and intense bond with animals, and I want to be able to use that to help protect them,” Jackson said. “We humans are their mouthpiece.”

Not only has she established herself as a successful actress, Jackson has also acquired a large following on social media. She currently boasts 9.7 million followers on Instagram and 2.7 million on Twitter.

Aware of her influence, she is keen to give back and regularly uses her social media platforms to help raise awareness for the various charities and causes that she supports.

“We’re all in this journey together and yes, social media is great for a bit of work and fun, but it can be used for a much deeper meaning,” she said.

The majority of Jackson’s career has been Asia-based, although she has begun to make waves internationally too. In 2017, she starred as Imra Ardeen (otherwise known as Saturn Girl) in superhero drama series Supergirl. It was her first Hollywood role.

Jackson spoke about her ambitions to work in the entertainment industry in the UK too. The actress confirmed the next chapter of her career would be in her home country.

The 29-year-old has recently finished filming a cameo role in a film with a British director who she “has always dreamed of working with.” The as-yet secret project will be announced later this year. In addition, Jackson said she is currently in talks with a few possibilities in the TV world. “I feel like presenting could be my calling in life – I love to have a chat with quite literally anyone,” the actress revealed.

The star has also been working to raise awareness of the efforts being made to help India in the aftermath of the coronavirus pandemic. The country made global headlines earlier this year as it struggled to cope with a huge spike in Covid cases.

In response, Jackson has been working with a charity called Breathe for India. Its focus is to help the country recover from the devastating aftereffects of the crisis.

As well as her philanthropy work, Jackson is concentrating on enjoying family life. She became a mother to a young son, Andreas Jax, in 2019. Talking about motherhood, Jackson described it as both demanding and rewarding. “It’s by far my most favourite role,” she said.

Her son has changed her whole life dynamic, she admitted. “Life before was so fast paced – I was here, there and everywhere which was fun, but it can be extremely draining,” said Jackson, whose partner is multi-millionaire businessman George Panayiotou. “Now, Andreas is at the forefront of every decision and choice, and that means my time and energy are preserved for people and projects I truly love and admire.”