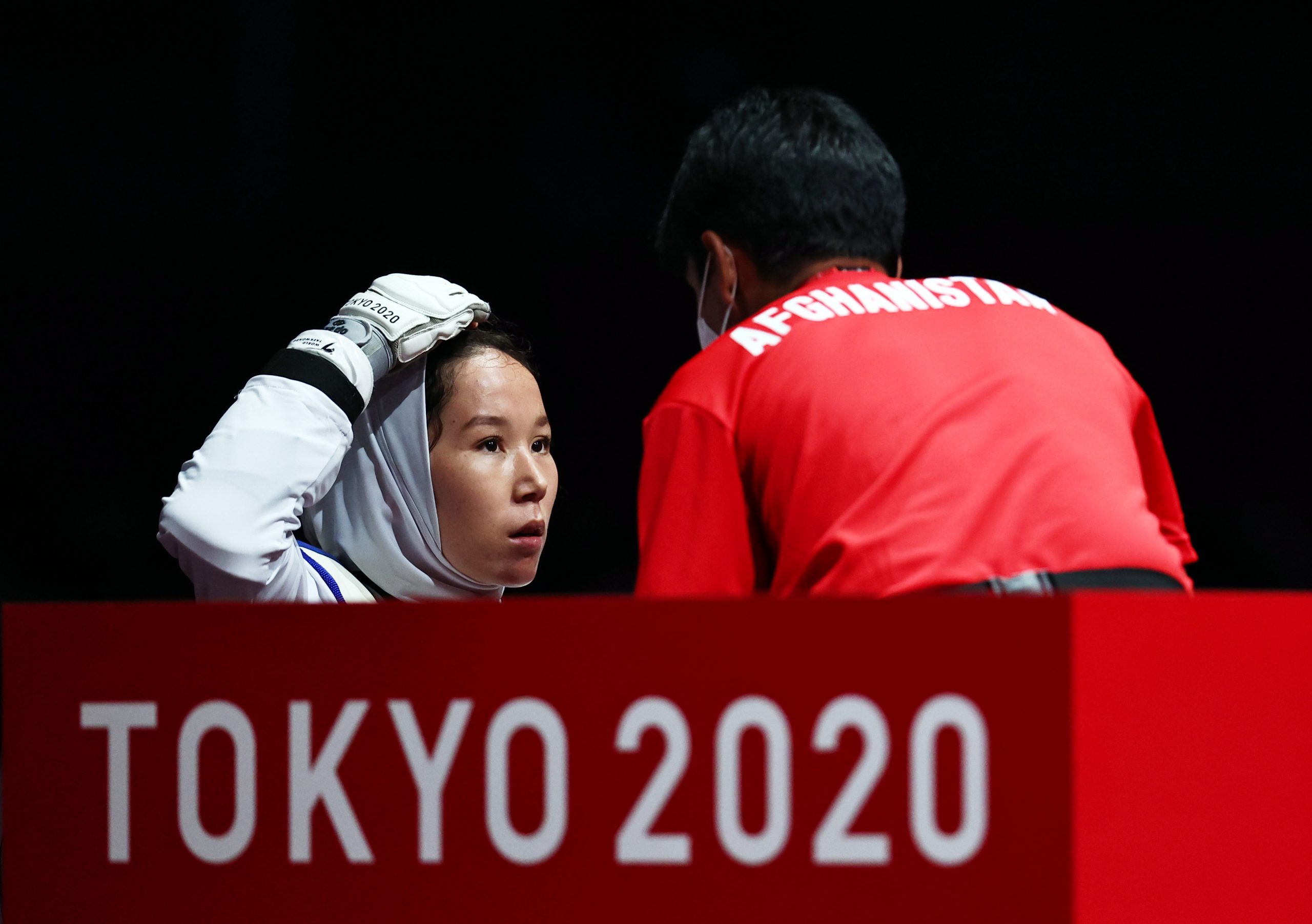 Zakia Khudadadi of Afghanistan during her bout against Viktoriia Marchuk of Ukraine. (REUTERS/Thomas Peter)

AFGHAN taekwondo athlete Zakia Khudadadi competed in the Paralympic Games on Thursday (2), becoming the first female Afghan to do so since Athens 2004, after a secret international effort to help her get out of Taliban-controlled Afghanistan.

The 22-year-old and her compatriot Hossain Rasouli arrived in Tokyo on aug 28 via Paris after Khudadadi made a video appeal for help to leave Kabul after the Taliban swept to power.

On Thursday (2), Khudadadi entered the Makuhari Messe competition arena in Chiba, near Tokyo, wearing a white hijab for the opening match of the debut of the Korean combat sport at the Paralympic Games. She became only the second woman to compete for Afghanistan at the Paralympics, which began in 1960.

“I’m happy that she was able to come to Japan,” Kyodo News quoted Uzbekistan’s Ziyodakhon Isakova as saying after her 17-12 defeat of Khudadadi in the under-49kg category.

Khudadadi, who will compete in the repechage round later on Thursday (2), did not speak to reporters. Both she and Rasouli had expressed a desire not to speak to media. Track athlete Rasouli competed in the long jump on Tuesday (31).

Alison Battisson of Human Rights for All, who was involved in their evacuation, told Reuters Australia had granted them humanitarian visas. It was not immediately known what the athletes intend to do after the Games.

In her Aug. 17 video appeal, Khudadadi had said: “I don’t want my struggle to be in vain and without any results.”

The pair had been unable to travel as originally scheduled after thousands of people rushed to Kabul’s airport, seeking to flee the country.

Given the chaos, Paralympic officials had initially said they would not make it to the Games.

The Taliban have said they would respect the rights of women allowing them to work and study “within the framework of Islam” but many Afghans are sceptical of the promise.

During their 1996-2001 rule, also guided by sharia Islamic law, the Taliban stopped women from working. Girls were not allowed to go to school and women had to wear all-enveloping burqas to go out and then only when accompanied by a male relative.