Zainab Haya Pasha: This is only the beginning of my journey in music

EVERY year amazing new stars appear in the music sky and one of the brightest to emerge in 2020 is Zainab Haya Pasha.

The talented Pakistani singer, songwriter and composer released her debut single Baarish earlier this month to critical acclaim and early indications are she is one to look out for in the future. The young artist is focused on making great music and has more songs on the way.

What was it that first connected you to music?
Growing up, my parents (and other family members) used to listen to a lot of music and sing all the time. My sisters and I would fall asleep listening to lullabies and songs that my mother, and aunt would sing for us. I think music has always just been a part of my life for as long as I can remember. I don’t think there’s one particular moment I can point out and say, ‘oh that’s when I connected with music’. I think it’s just always been a part of my soul.

Who were your big musical influences growing up?
I had very diverse musical experiences growing up, from Elvis Presley and John Denver to Strings and Nazia Hassan, to the Disney channel stars, to Kishore Kumar. When you have a family that’s obsessed with music, not all of them will have the same taste. So I grew up with a little bit from every possible genre.

You have written and performed Baarish and had a great team working on the song. What inspired it?
I’ve had quite a journey with it, honestly. When I was told I needed to send out an original demo, I was actually really nervous because I had never written anything in Urdu before. The rain is something I love, maybe even a tad bit more than music. There was a beat playing in a loop and all I could think about was the rain, and how it makes me feel. So I wrote it all down and created Baarish. It was the first time I wrote something and did it in almost three hours. The song shows the world how much the rain means to me and what it makes me feel. 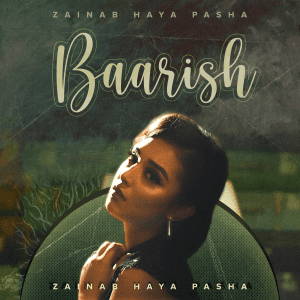 How did you feel when the song was released?
I was nervous and excited. For me, the new chapter in my life started the second I heard the final version of the song. It’s never been about whether the song will become popular or whether people would like it. Before it came out, I was pretty confident that whoever it does reach, it will touch their hearts, even if just 10 people were listening to it. The nervousness was more about how my voice would sound out there in the world for people to hear. It was the good kind of nervousness.

Tell us about the video and the inspiration behind it?
The video was about me being in my own little world. I wanted to be on my own, do my own thing, and show that to everyone. As Marya (Javed), who was the director, said while shooting, ‘We’re taking you on a date with yourself’. I wanted the video to be highly stylised and I wanted to have fun and be myself. Marya and her team did a great job and captured everything so beautifully. The video for this song was a dream come true, thanks to Studio M, and my uncle and aunt.

Who are you hoping will connect with this song?
I feel like anyone who listens to the song will connect to it. The lyrics will mean different things to different people. Of course, those with a love for rain or anything remotely close to rainy weather will connect to it, but I think the song  means more than that. My uncle said to me that this is a song that everyone will connect to. He didn’t just say that because he’s my uncle, but because it’s true. I genuinely believe people will love it if they listen and connect to it.

Which artists would you love to collaborate with?
Strings – hands down, they are my first choice. My love for this band and respect for their music is just beyond anything you can imagine. My second choice would be Aarish. I genuinely love their music and I’m possibly their number one fan.

What kind of music dominates your personal collection?
Like I said, I have very diverse tastes. Good music for me isn’t one particular genre. To me, good music is anything that sounds good, brings a smile to my face and makes me dance. So I have a pretty diverse playlist.

What inspires you as an artist?
The people around me, the vibe I surround myself with, and the hard-working and talented artists and musicians I know. Not just them, but the creative people I know. Creativity is a beautiful gift. I keep myself around people who are creative. I’m blessed with a creatively inclined family as well, so I guess all these things inspire me.

Finally, why do you love music?
You don’t need a reason to love music. Music is a universal language and it helps tell stories, express feelings, spread love and helps people get through things every single day. Music is a way of life.