Tahir Zarif, 31, was detained by police in Mirpur, Pakistan in January 2018. 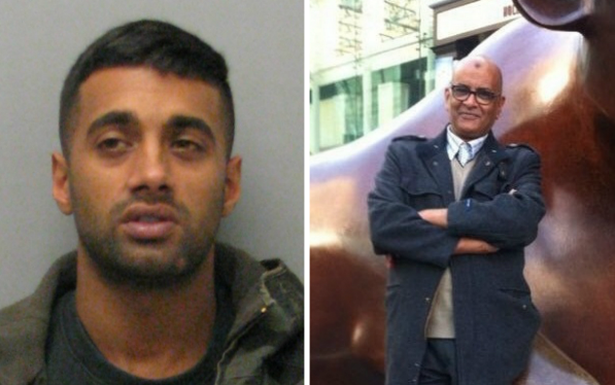 A gunman who killed a Digbeth businessman in a botched robbery in 2016 now faces life in jail.

Tahir Zarif, 31, was convicted on Wednesday (30) for murdering Akhtar Javeed, 56, six years ago. Zarif was arrested by the British police in 2020 on UK plane after being extradited from Pakistan, according to reports.

The police on Wednesday released a bodycam footage which showed the moment Zarif was held. He had been on the run in Pakistan after fleeing the UK days after the brutal homicide.

#WATCH | This is the moment a gunman who fled the UK after shooting dead a businessman in a botched Birmingham robbery was brought back to face justice after two years on the run.

Tahir Zarif was taken off a plane in handcuffs after being extradited from Pakistan.

The thug shot Javeed, 56, when he tried to fight off two gunmen during a raid at his cash-and-carry, on February 3, 2016.

As the businessman attempted to flee the Direct Source 3 warehouse in Digbeth, Birmingham, he was restrained before being shot in the foot, leg, throat, and mouth.

The robbers fled empty-handed in a getaway car as he passed out in the street and choked to death on his own blood.

Zarif fled the UK days after the murder. He is seen on airport CCTV footage fleeing the UK and heading to Pakistan after the deadly attack.

He was eventually apprehended and detained by police in Mirpur, Pakistan in January 2018, and was extradited in February 2020.

In the court, he claimed that he show Javeed accidentally twice in a struggle. However, he was found guilty of murder.

During the raid, the gang threatened Javeed and ordered him to give up the company’s takings.

Zarif brought Javeed from the office into the reception, where he shot him in the leg as a ferocious warning to unlock the safe while the staff was being kept hostage at gunpoint.

He was able to get away, according to the testimony given in court, before collapsing and dying on the pavement after staggering across the parking lot.

According to reports, one of the gang members, a former unhappy worker at Direct Source 3, created the strategy for the robbery, so the assailants knew exactly where to go once inside.

Suraj Mistry, 26, was jailed for 23 years in September 2016 for his part in the incident. Other gang members Lamar Wali, 23, and Sander van Aalten, 54, were jailed for seven years and six years and eight months, respectively.

Detective Inspector Ranj Sangha, of West Midlands Police, said: “Despite most of the gang being jailed for this horrific crime back in 2016, we refused to rest until Zarif, who fired the fatal shots, was brought to justice.

“It’s been six years and nine months since my father’s life was taken by Tahir Zarif. My father has been in our thoughts every day since,” Javeed’s daughter Lilas is reported to have said.

“Another man’s greed led to my father’s unlawful death. We are grateful to West Midlands Police for their hard work in ensuring justice is served.”

Zarif will be sentenced at Coventry Crown Court on December 9.