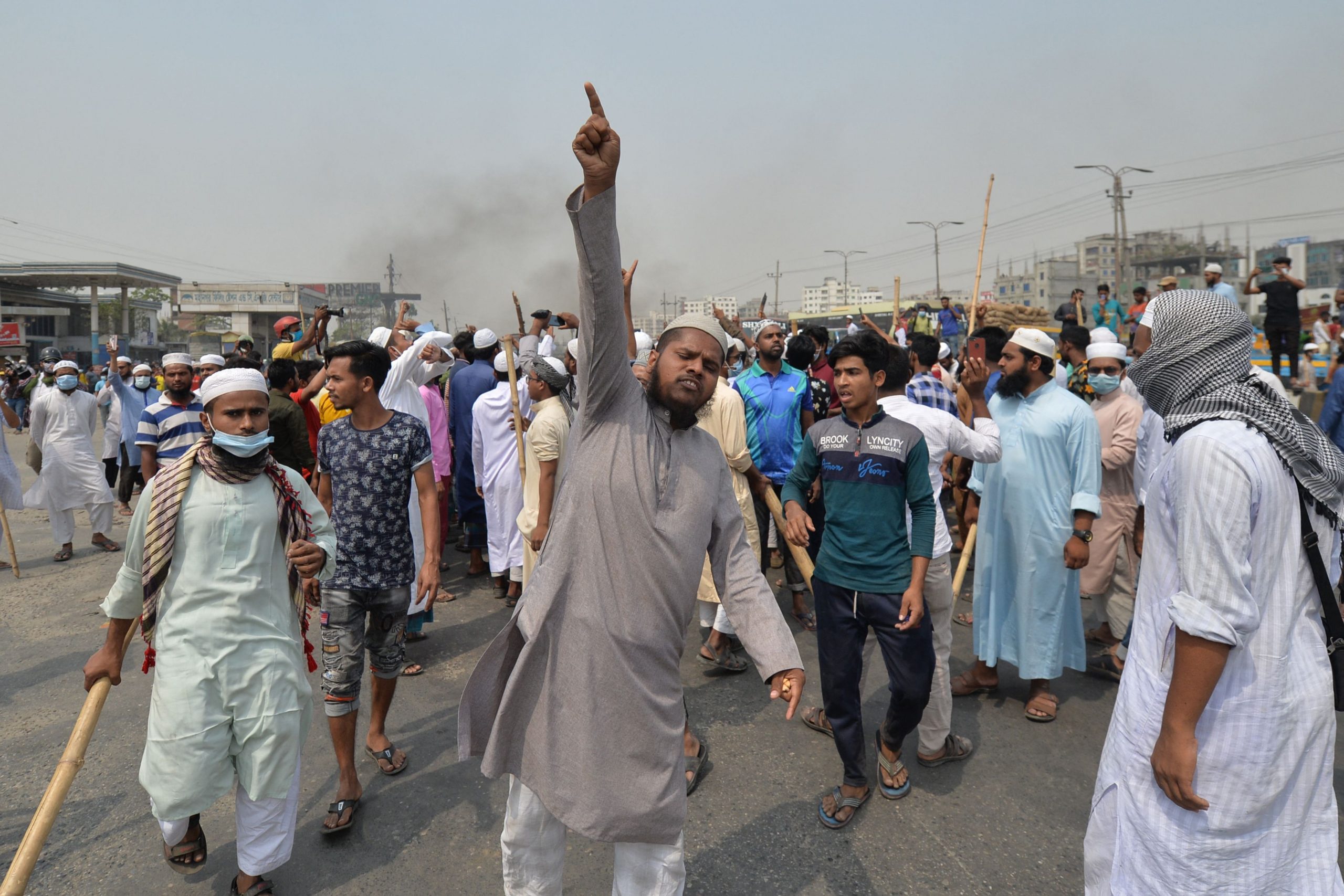 An activist from Hefazat-e Islam shouts slogans as with others block a road during a nationwide strike following deadly clashes with police over Indian Prime Minister Narendra Modis visit, in Narayanganj, about 16 km southeast of Dhaka on March 28, 2021. (Photo by Munir Uz zaman / AFP) (Photo by MUNIR UZ ZAMAN/AFP via Getty Images)

Two people died in fresh clashes between protesters and Bangladesh police on Sunday, raising the death toll from Islamist protests against the visit of India’s prime minister Narendra Modi to 13, officials said.

The protesters — mostly from the hardline Islamist group Hefazat-e-Islam — were angry at the visit of Modi as Bangladesh marked 50 years of independence, accusing him of stoking communal violence against Muslims in his country.

Five people died on Friday, and another six the next day, after police shot at demonstrators in several major districts across the Muslim-majority nation of 168 million people.

Two others — a 19-year-old and a 23-year-old — died in the eastern district of Brahmanbaria after officers opened fire in clashes in the rural town of Sarail on Sunday, a police spokesman told AFP.

“They (protesters) stormed a highway police station, torching it and injuring at least 35 policemen. Police opened fire in self-defence,” the spokesman told AFP.

The spokesman did not say if the pair had been shot dead by police.

He said some 3,000 protesters, mostly Hefazat supporters, had blocked a highway and attacked police with bricks and stones.

Bangladesh’s home minister Asaduzzaman Khan called for the protests to be halted.

“Our security forces are observing this with patience,” Khan told reporters on Sunday.

“We think if this is not stopped, we’ll take necessary actions.”

At another protest in Narayanganj just outside the capital Dhaka on Sunday, Hefazat supporters chanted “action, action, direct action” as they blocked the key highway linking Dhaka with the port city of Chittagong.

Hundreds of demonstrators burnt furniture and tyres on the roads as they chanted anti-Modi slogans and called on authorities to investigate the earlier shootings.

Police fired tear gas and rubber bullets after the protesters barricaded parts of the highway. A police spokesman told AFP they had since left the road.

Bangladesh’s largest English-language newspaper, The Daily Star, reported that at least 10 people were injured when Hefazat supporters attacked a train carrying passengers from Dhaka to Chittagong.

Hefazat spokesman Jakaria Noman Foyezi told AFP thousands of its supporters joined demonstrations at its headquarters at Hathazari outside Chittagong, which is home to a top Islamic seminary.

Local media also reported clashes between Hefazat supporters and police in several other cities and towns.

The Islamist group has a nationwide network and has held large protests in the past demanding Bangladesh introduce blasphemy laws.

Protests were also held in the northeastern city of Sylhet and in Bosila, a Dhaka suburb, but there were no reports of violence, local media reported.

As Bangladesh celebrated independence, human rights groups criticised the government for what they described as growing authoritarianism, including forced disappearances and extrajudicial killings.

Other groups — including students, leftists and other Islamist outfits — also staged protests against Modi’s visit on Friday and Saturday.