Tuk-tuk warriors: the abuse victims who rode to women’s rescue in lockdown India 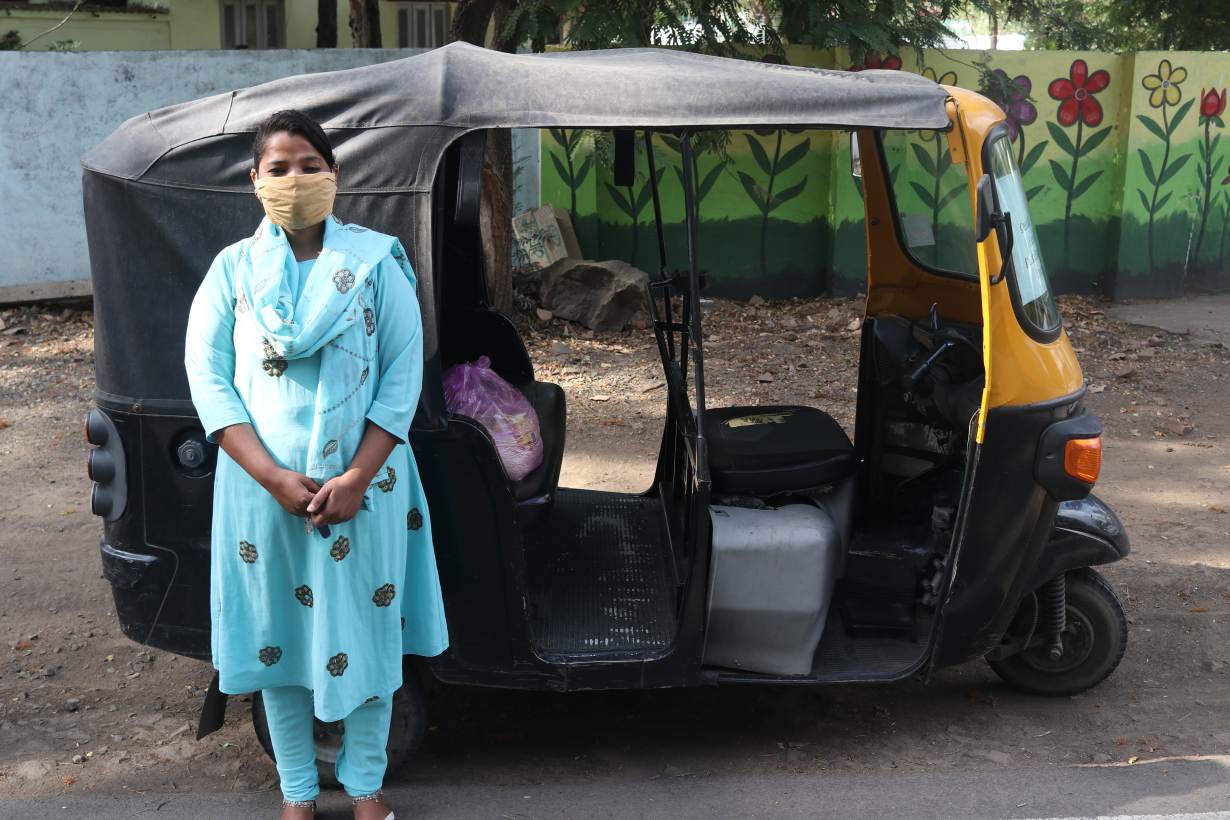 Talat Jahan, a domestic abuse survivor, poses for a photo next to her tuk-tuk in Bhopal India. Thomson Reuters Foundation/Handout by ActionAid

As the coronavirus kept virtually everyone at home, Talat Jahan was busily crisscrossing the slums in her black-and-yellow rickshaw – on a lockdown mission to help women suffering abuse and hunger in her central Indian city.

Jahan, 29, a domestic abuse survivor, and about a dozen other women who recently trained to become Bhopal’s first female rickshaw drivers, ferried food and other essentials to hard-hit city families during India’s months-long lockdown.

But often, Jahan said, she and her fellow volunteers from the Gauravi one-stop crisis centre were simply a sympathetic ear for women cooped up with their abusers during the COVID-19 lockdown, which led to a spike in domestic violence worldwide.

“Some women who were stuck at home with their abusive husbands, they would come and seek me out and tell me about their troubles,” said Jahan, who suffered violence and demands for a dowry from her in-laws.

Bhopal’s charity-run Gauravi was the first such centre set up after the gang rape and murder of a woman on board a Delhi bus in 2012, a crime that sparked global outrage over women’s treatment and led to tougher anti-rape laws in India.

It also helped Jahan and the other women rickshaw drivers – many of whom are survivors of domestic violence – find a new profession, as well as a way to assist other women in need.

“I felt blessed to be able to help these women because I had been through the same and knew what it is like, this feeling of helplessness,” Jahan told the Thomson Reuters Foundation by phone from Bhopal, the capital of Madhya Pradesh state.

“When one of them said to me ‘Had it not been for you, I would have died’, I knew I was doing something right.”

As countries across the world reported a surge in calls to domestic violence hotlines, India’s federal and state governments set up a dedicated helpline for women during the coronavirus restrictions.

The National Commission for Women (NCW) also launched a WhatsApp helpline in April, according to the women’s ministry.

The NCW registered 660 complaints of domestic violence in July, up about 45% from the previous month. During the strict lockdown between late March and June, the commission’s helpline logged some 1,500 complaints.

Neither the women’s ministry or the NCW responded to requests for comment.

“So, where do these most vulnerable women go? That’s the larger picture that needs to be seen against the COVID-19 pandemic.”

She said the centre received 1,400 distress calls from women during the lockdown, ranging from domestic abuse, marital rape and trafficking cases to pregnant women unable to access healthcare and abortion services.

In cases involving domestic violence, counsellors would talk to the couple over the phone. If that failed, they would meet the husband at the couple’s home or at Gauravi before approaching the police for help.

“If husbands didn’t mend their ways, we would keep the women and their young children at our shelter,” said Neelima Jatav, 26, who joined Gauravi as a staff worker after enduring domestic abuse, divorce and a miscarriage.

While there were many challenges – not least securing travel permits to reach distressed women, one of the biggest was social distancing, Sinha said.

“Earlier we would hug women, hold them, wipe their tears to comfort them during a difficult time,” she said.

“A healing touch – that was what was most needed during COVID-19 – and that totally got lost.”

There is no quick end in sight to the outbreak in India as coronavirus cases soar in the world’s second most-populous nation, reaching 3.69 million this week as the country repeatedly reports the highest global single-day caseloads.

Despite the surge in infections, restrictions are being eased as authorities seek to revive the economy.

The United Nations has called domestic violence a “shadow pandemic”, predicting that lockdowns could lead to a 20% surge in abuse.

To prevent such an outcome, the women at Gauravi decided to find vulnerable people, list their needs, pack kits of food and vital aid and use their tuk-tuks to deliver nearly 10,000 of them over the three months.

They also drove women to work, helped them call government ambulances and raised awareness about COVID-19 when public transport – including tuk-tuks – came to a halt, depriving the women drivers of the daily income of up to 1,500 rupees ($20).

Pranita Achyut, a director at the International Center for Research on Women in Asia, welcomed such projects, but said India had a long way to go in adequately supporting and rehabilitating women trying to flee abuse.

“Unless we take violence as a systemic, structural issue, small bits and pieces – while they are important and necessary – will not be enough,” she said.

She called for a range of actions, including reforming India’s creaking criminal justice system to ensure more domestic abuse cases reach court and make it more sensitive to the mental health problems suffered by many victims.

In the meantime, Jahan said she was happy with her newly-acquired driving skill, which she credits for a boost in her confidence – something she lacked in the past.

“I was very nervous at first… and people made fun of me too. But I carried on regardless. They slowly understood I was not going to back down,” she said, adding that she now felt ready to learn how to drive a bus, and then fly a plane.

“I’ve never been on one, but it has been my childhood dream to fly one.”