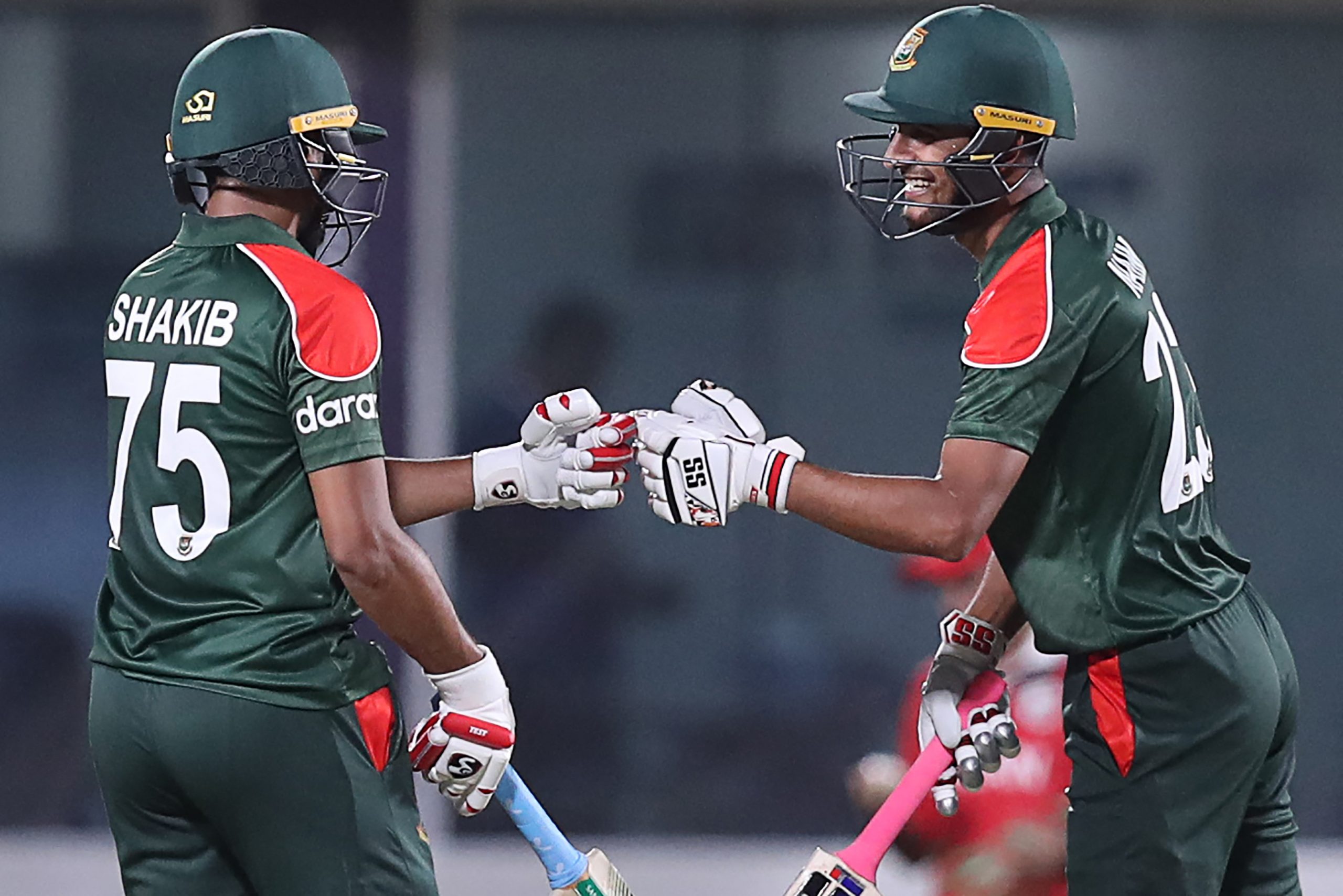 Mohammad Naim and Shakib Al Hasan propped up Bangladesh innings with a 80-run stand. (Photo by HAITHAM AL-SHUKAIRI/AFP via Getty Images)
Follow Us

SCOTLAND moved to the brink of reaching the Super 12 stage of the Twenty20 World Cup with a victory over Papua New Guinea on Tuesday (19), while Bangladesh kept their hopes alive with a convincing win over hosts Oman.

Richie Berrington smashed 70 off 49 balls while Josh Davey took four wickets for 18 to help Scotland, who beat Bangladesh in their opening match, to a 17-run win against Papua New Guinea at the Al Amerat ground in Oman.

Bangladesh’s 26-run victory in the day’s second match meant they were tied on two points with Oman, behind leaders Scotland on six, with all of the Group B teams having one match left.

Berrington combined with Matthew Cross, who made 45, in a 92-run stand for the third wicket to lay the foundation for Scotland but the team lost their way towards the end, including losing four wickets in the final over, to post 165 for 9.

Papua New Guinea’s chase was derailed at the start when they were reduced to 35 for 5 inside six overs and some lusty hitting at the end by Norman Vanua, who hit 47 in 37 balls, was not enough.

It was the second straight loss for Papua New Guinea, who have no chance of progressing, while Scotland top the table in Group B.

Two teams from each group will advance to the Super 12 stage, which will start from Saturday (23).

After a shaky start Mohammad Naim and Shakib Al Hasan propped up the Bangladesh innings with a third-wicket stand of 80 and appeared on course to give the South Asian side a big total after they opted to bat first.

But the partnership ended when Shakib was run out on 42 and it paved the way for the hosts to wrest back the initiative with quick wickets. Naim made 64 off 50 balls.

Oman’s bowlers showed great control during the death overs and received huge cheers from the crowd when they managed to bundle Bangladesh out for 153 on the last ball of the innings.

With Bangladesh facing the prospect of an early exit, their bowlers rose to the occasion and a clinical performance on the field restricted Oman to 127 for 9.

Seamer Mustafizur Rahman picked up four for 36 while Shakib showed his worth as an all-rounder by taking three for 28.