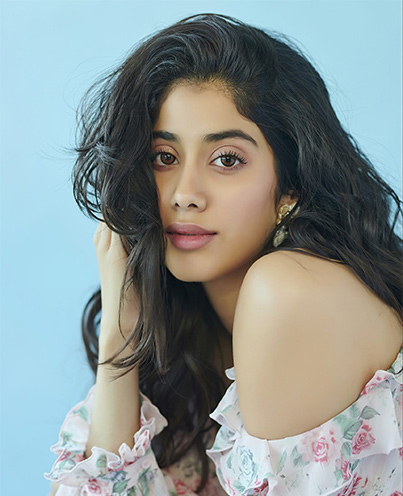 RISING CINEMA STAR KAPOOR REVEALS HER CAREER PLANS, EVOLVING AS AN ACTOR AND THE POSITIVES OF PRESSURE

YOUNG actress Janhvi Kapoor being included in the high-profile list of names being interviewed at this year’s London Indian Film Festival shows just how far she has come in a short space of time.

The rapidly rising Bollywood star has already delivered winning performances in films including Gunjan Saxena: The Kargil Girl and admirably dealt with the pressure of being Indian film icon Sridevi’s daughter. She has shown a maturity way beyond her years and has a host of major releases on the way.

Eastern Eye caught up with Janhvi to discuss her journey in films so far, hopes, inspirations, lockdown life and colourful new passion.

Have you got used to the pressure of being an actress in Indian cinema yet?
I don’t think one ever gets used to the pressure, but I’ve learned how to use it in a way that actually propels me in my journey. It motivates and pushes me. I sometimes use the so-called pressure, which many times comes in the form of feedback and critique of your talent, as a kind of a magnifying glass into my own work, to kind of sieve what I can work on and improve. It’s an interesting perspective to get because I think a lot of the time, maybe like 60-70 per cent, people tend to judge you on your actual work, and the rest is based on the perception they have of you. As long as I get to do the work I love, the pressure is a small part and can be a good thing.

You have taken everything in your stride. Where does that self-confidence come from?
I don’t think it has anything to do with my confidence – it is maybe more to do with the fact that I love what I do and I want to keep doing what I do. In order to keep at the journey, I can’t let it bog me down, I need everything around me to propel me forward. So, there is no other choice except to take it in my stride and grow from everything as an actor. I think one must constantly seek growth and evolution.

What is the biggest life lesson being an actress has taught you?
That the reward in your work and efforts is very seldom measured in the way you would imagine. You can go into a film thinking, ‘Oh my god, this is a great film. I’m going to work hard and it’s going to be a big success,’ but success can mean different things. It might not do as well at the box office as you expect, but it might be a success for you because you became a better actor and had more life experiences through it. I know that’s idealistic and maybe not a fruitful way to go about your career, but I think it helps an artist. I think you need to constantly self-evaluate the intent with which you work. I think good intent to just be honest with your work, learn from it, grow from it, and submit to it has always yielded positive results.

How much did the positive reaction to Gunjan Saxena: The Kargil Girl mean to you?
The positive reaction to the film and that people were so moved by what we did it meant a lot. And [the fact that they] even understood what we were trying to say meant the world to me because that was a very hopeful indication of how emotionally connected audiences are willing to get to a character who stands for something. That’s so encouraging and positive.

How are you selecting the project that you do?
I don’t really have a set way in which I select films, but I’m an extremely excitable actor, I think, and like feeling that I’m about to embark on something challenging. I guess it fundamentally needs to be something that excites me, something I know I’ll be happy waking up to work on non-stop for four months, and like living, breathing, eating and thinking about it. Including prep, it can take up to a year to make a film. So, I need to be excited by what the filmmakers are trying to say and the new dimensions in the character I’ll be able to explore. I want to learn something and find something new within myself through the film and character.

Which film do you have on the way next?
I just finished shooting Good Luck Jerry in Chandigarh and am super excited about it. As I said, I like characters that encourage me to look for new facets and dimensions in my own personality and present myself in in a new light. I really liked the story and comedy of it, and I was excited to be a part of the film. As I went on set, I realised I was projecting and displaying emotions and aspects of my personality that I have never ever explored before, which was extremely exciting because it made me see the character through a completely different lens. We explored and tried a lot of new things, so I’m excited to see how audiences react to it.

Do you have a dream role?
I really want to do comedy, and by that I mean actually being the one doing the comedy with the one-liners, quirkiness and causing the situations that are resulting in the comedy, as opposed to just being a spectator.

Can you see yourself working in projects in the west?
This is a wonderful time, with all our digital streaming platforms and content exchange, for us to be sort of global artists. I think borders and ethnicity matter so little in this environment and that’s amazing. So, I would love to kind of cross over and explore those options. Maybe it’s all wishful thinking, but culturally I think that I’ve always been quite in sync with and exposed to western culture. I would love to explore acting and work there for sure.

Which of your legendary mother Sridevi’s roles are your favourite?
I love Sadma and think that is one of her best performances, and English Vinglish. I also thought the Charlie Chaplin segment in Mr India was genius.

How have you handled lockdown?
I don’t think I have any right to complain about handling lockdown because at least I’ve been safe, I’ve been home and my family’s been safe. We stay in a comfortable house and have not had to worry about food, so there really isn’t anything to complain about. I wake up, watch movies, read books, paint and work out. Sometimes you feel kind of helpless because you don’t know when the cycle is going to end and when your work is going to resume, and what the future holds. [You don’t know] How to realign your dreams and ambitions to these new world standards, but these are all existential and you need to be aware that there is a lot of suffering in the world right now.

So what do you do?
You just need to go with the flow, hope for the best and understand that in the scheme of things, realigning your dreams and ambitions might not be the most harmful thing for you because there’s worse happening out there for other people, and at least I’m safe and happy. I’m so thankful I have the opportunity to watch so much stuff and think it it’s really helping me as an actor.

Did you learn any new skills during this time?
Like I said, I really picked up painting. I don’t know if I’m any good, but it’s extremely relaxing and therapeutic to just put on some music, light some candles and start painting. It’s like my favourite thing to do.

How do you feel about being part of London Indian Film Festival?
It’s my first time being part of the London Indian Film Festival and it’s such an honour. I had such an amazing time during our Zoom interview. It was one of my most favourite interactions ever. I’m really excited, and honoured. I wish I could be there in person, but of course this is the situation and hopefully soon I will be.

What kind of content do you enjoy watching as an audience?
I enjoy watching content that’s honest. I love watching things that move and teach me something I didn’t know before about a new culture, feeling or experience. I love consuming content and honestly, I’m not that finicky about it, but I can identify when a filmmaker’s and actor’s intent is honest. I think I gravitate definitely more towards honest content.

What inspires you?
Life inspires me. I think every experience I’ve had, have seen people have and heard about has been an inspiration. It enables me to kind of go within myself and try and understand the human psyche better. Watching great work also inspires me – the fact that artists are able to showcase and present work so beautifully, and make viewers empathise with the plight of those they probably knew nothing about. It inspires me that films give people hope and that as a medium, it has the most power over you. It has the ability to move you, make you cry and feel happy, and look at things from a new perspective. Films as  a medium are inspiring, and being with people who are really passionate about something, such as filmmakers, actors and writers; being in that environment is extremely invigorating.

If you could master something new what would it be?
I really want to master dance. I keep dabbling with it and doing a few classes, and then having to disappear for months because of work, and coming back to it. I don’t know if you can ever master dance because it’s one of those endless sort of art forms, but I think it helps you a lot just as a person, with control, rhythm, discipline, spontaneity and confidence. I really want to get to it.

Finally, why do you love cinema?
(Smiles) What’s not to love?