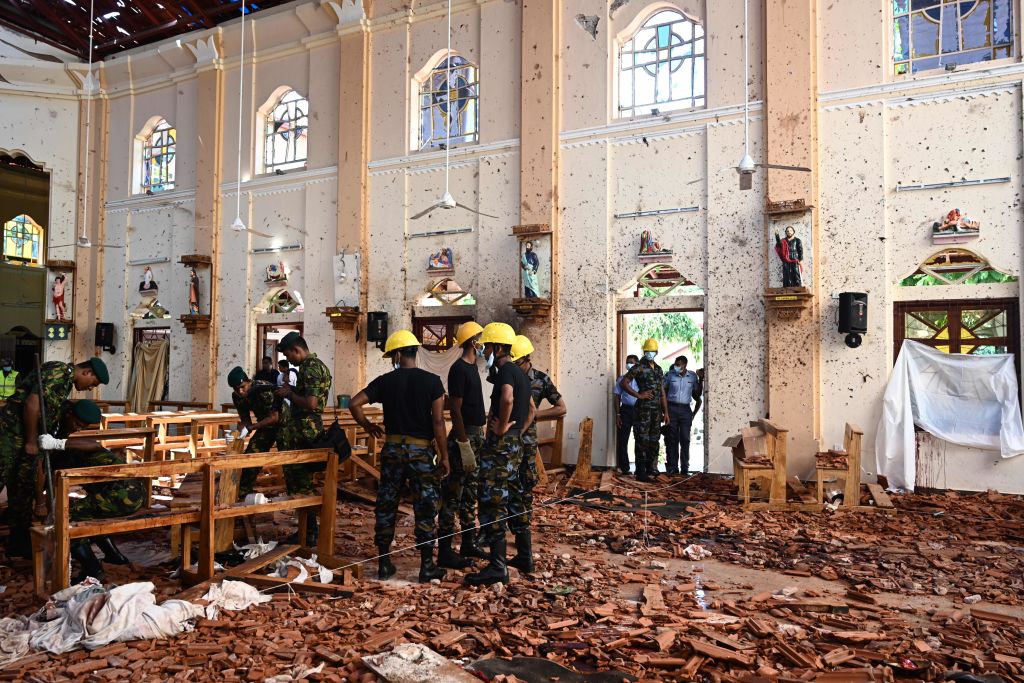 Security personnel inspect the interior of St Sebastian’s Church in Negombo on April 22, 2019, a day after the church was hit in series of bomb blasts targeting churches and luxury hotels in Sri Lanka. (Photo by JEWEL SAMAD/AFP via Getty Images)

SRI Lanka has filed 23,270 charges against 25 people in connection with the deadly 2019 Easter Sunday attacks that killed 258 people, the president’s office said on Wednesday (11).

The charges filed on Tuesday (10) under the Prevention of Terrorism Act (PTA) include conspiring to murder, collecting arms and ammunition and attempted murder.

Nine suicide bombers, belonging to local Islamist extremist group National Thawheed Jamaat (NTJ) linked to the ISIS, carried out a series of blasts that tore through three churches and as many luxury hotels in Sri Lanka on the Easter Sunday on April 21, 2019.

Sri Lankan police have arrested hundreds of suspects in connection with the suicide bombings.

The attorney general’s department said that the Chief Justice has been asked to appoint a special high court bench to hear the cases speedily.

The Buddhist-majority nation was about to mark a decade since ending a 37-year-long Tamil separatist war in May 2009 when the suicide bombings in 2019 rocked the country.

The attacks caused a political storm as the then government headed by president Maithirpala Sirisena and prime minister Ranil Wickremesinghe was blamed for its inability to prevent the deadly attacks despite the “prior intelligence made available on the impending terror strikes”.

During his tenure, Sirisena formed a presidential panel to probe the attacks.

In its report, the panel said that Sirisena and a host of other top defence officials, former defence secretaries, former IGPs and intelligence chiefs, were guilty of ignoring prior intelligence. The panel report recommended criminal action against them.

The cardinal said that a presidential inquiry on the attacks initiated by Sirisena found the then-president himself guilty of failure to prevent the attacks.

The inquiry faulted Wickremesinghe for his “soft attitude” towards the rising Islamic extremism in the island, the cardinal said.

The church, demanding accountability for the intelligence failure, has expressed dissatisfaction over the lack of seriousness in the investigations to bring culprits to book.

The government denied any lethargy in investigations and said nearly 700 people have been arrested and the due legal procedures are in place.

The blasts targeted St Anthony’s Church in Colombo, St Sebastian’s Church in the western coastal town of Negombo and a church in the eastern town of Batticaloa when the Easter Sunday mass was in progress on April 21, 2019.

Explosions were reported from three five-star hotels – the Shangri-La, the Cinnamon Grand and the Kingsbury in Colombo.