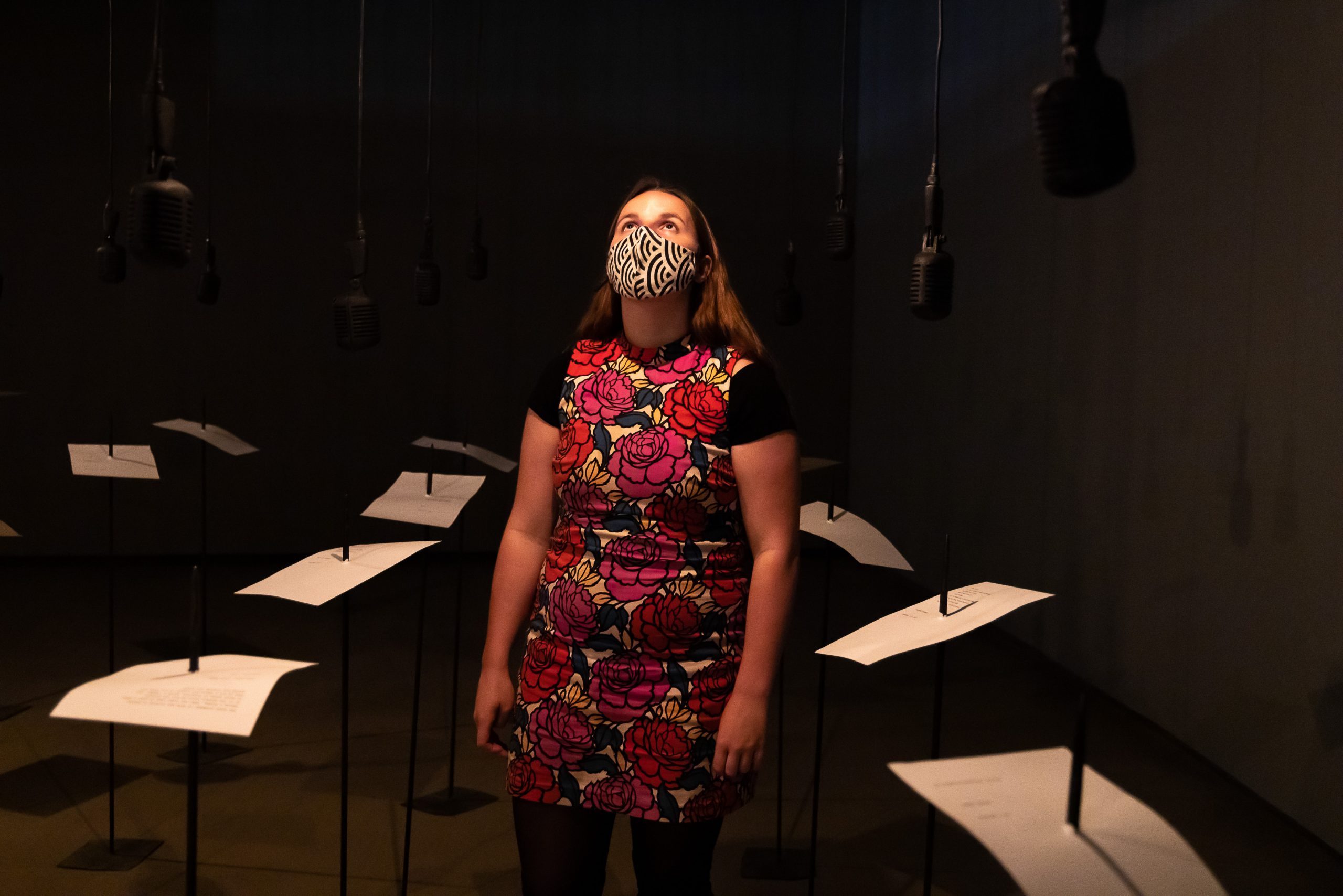 THE first major London solo exhibition by critically acclaimed Indian artist Shilpa Gupta has premiered in the capital this month.

Held at the Barbican Centre, Gupta’s Sun at Night presents and builds on her acclaimed project For, In Your Tongue, I Cannot Fit (2017–18).

It is an immersive multi-channel installation which comprises 100 microphones suspended above 100 metal spikes, each piercing a page inscribed with a fragmented verse of poetry by a poet incarcerated for their work, writings, or beliefs.

It is described as giving a voice to those who had been silenced, highlighting the “fragility and vulnerability of one’s right to personal expression whilst raising urgent questions of free expression, censorship, confinement, and resistance.”

The installation’s commentary on censorship is “unfortunately as relevant as ever”, Gupta said. She believes the space for speaking freely has continued to shrink. “We are living in times where larger structures have the ability to pry into personal spaces which they do not hold back from intruding into,” the artist told Eastern Eye.

For, In Your Tongue, I Cannot Fit, is linked to one of Gupta’s early exhibitions Someone Else (2011). It is an installation of 100 books written anonymously or under pseudonyms, based on writers who wrote under a fictitious name. This was to seek freedom in being ‘someone else’ –whether to conceal their gender, avoid personal or political persecution, or even to publish a rejected work.

Gupta’s work often explores themes of identity, nation borders and censorship. Her Blame (2002) performance project saw her peddle small bottles of fake blood in Mumbai local trains with a label that reads: “Blaming you makes me feel so good, so I blame you for what you cannot control, your religion, your nationality.”

The work was conceived shortly after several instances of major conflict, such as the 9/11 terrorist attacks and the 2002 Gujarat riots.

The intrigue derives from the “inter-relationships between large structures and individuals”, Gupta revealed, “when systems, be it the state, or even otherwise, attempt to map, graph, tabulate to seek control, people masquerade, infiltrate, and catapult”.

“The works are about the persistence of beliefs, dreams, mobility, which make us, what we are, as individuals.”

While putting together Someone Else, Gupta found that a number of notable writers resorted to using fake names. This included 1984 author George Orwell, whose birthname was Eric Arthur Blair. It is reported he used a pen name prior to the publication of his first novel, Down and Out in Paris and London, so his family would not be embarrassed by his time in poverty.

Even one of Gupta’s favourite writers, the Indian author Premchand, had taken a fake name. Regarded as one of the greatest Indian writers of the early 20th century, he assumed the pen name Nawab Rai for his first novel, Mystery of God’s Abode.

It came to Gupta’s attention that Premchand’s books were once burnt and he had been charged with sedition (promoting rebellion against the government, through speech or writing.)

“As usual, questions lead to some answers, and then more questions. I started looking at the moments when the mobility of words caused such discomfort to those who sought to restrict imagination through the mobility of a writer,” Gupta said. “This, along with the changing atmosphere under the current government in India, which has been turning restrictive, led me to becoming interested in the power of words, and the nervousness around them felt by those in power.”

Showcasing her first solo exhibition in London is a special moment for Gupta, who has only exhibited group shows in the capital previously. “It is wonderful to be able to show a project at a public multidisciplinary venue like the Barbican,” she said.

Outside of London, she has participated in the Liverpool Biennale and Manchester Asian Art Triennale and had a solo show at Bristol’s Arnolfini art centre. Gupta’s work has been shown at spaces all over the world including the Netherlands, Germany, and the United States.

She said her 2006 show at the Havana Biennale in Cuba was a highlight. The festival is the largest visual arts event in the country.

“It was a particularly memorable experience as, despite limited resources, a magnificent show was mounted in which artists from all over came together with a wonderful sense of warmth and generosity,” she recalled. “It was also a place where I received overwhelming moving responses to my works from general audiences which gives one strength and a sense of belief in the possibilities of art.”

Shilpa Gupta: Sun at Night will be exhibited at The Curve, Barbican Centre, until February 6 2022