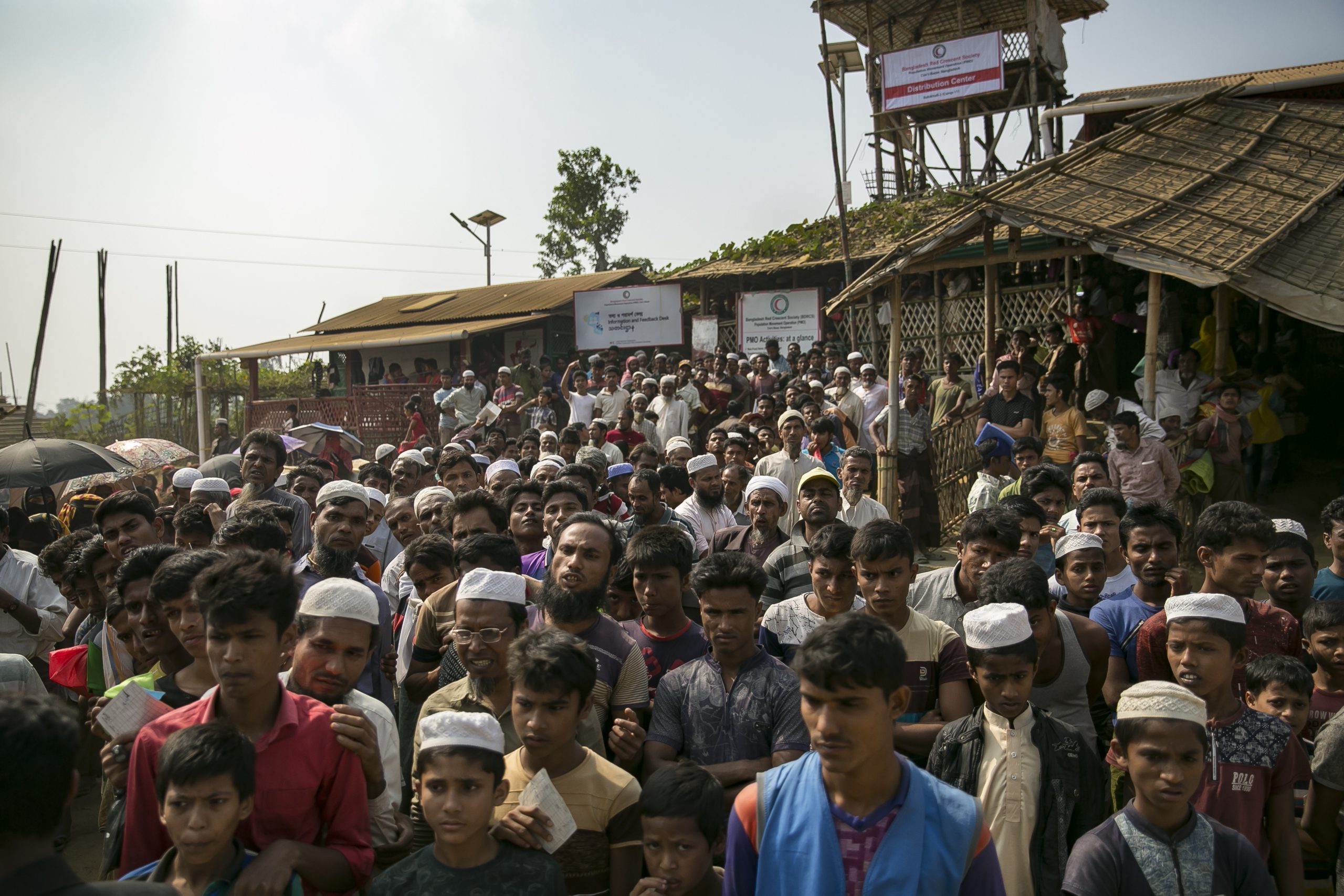 COX’S BAZAR, BANGLADESH – DECEMBER 11: Rohingya refugees queue for a blanket distribution in a refugee camp on December 11, 2019 in Cox’s Bazar, Bangladesh. The UN’s International Court of Justice in The Hague began on Tuesday hearing a case filed by The Gambia against Myanmar over the Rohingya genocide case. (Photo by Allison Joyce/Getty Images)
Follow Us

Emergency teams raced on Friday (15) to prevent a coronavirus “nightmare” in the world’s largest refugee settlement after the first confirmed cases in a sprawling city of shacks housing nearly a million Rohingya.

There have long been warnings the virus could race like wildfire through the cramped, sometimes sewage-soaked alleys of the network of 34 camps in southeast Bangladesh.

Most of the refugees have been there since around 750,000 of the Muslim minority fled a 2017 military offensive in neighbouring Myanmar for which its government faces genocide charges at the UN’s top court.

On Friday, another senior health official said two more Rohingya had tested positive — a 42-year-old woman and a 30-year-old man.

It was unclear if they had been in contact with the first two cases.

Mahbubur Rahman, the chief health official in the local Cox’s Bazar district, said news of the infections had sparked “panic” in the camps.

The 35-year-old Rohingya man, whose positive result was announced Thursday, lives in Kutupalong, the largest of the camps. He sparked a manhunt at one point after he fled before police found him around four hours later.

“We are worried. He can spread the disease in the camps,” community leader Abdur Rahim told AFP.

Rahim said the man is believed to have been infected in a hospital in a nearby town where he took his injured brother for treatment.

WHO spokesman Catalin Bercaru told AFP that “rapid investigation teams” were being deployed.

Rahman, the health official, said an entire block in one camp, housing around 5,000 people, was shut off, and that all contacts of the men were being traced and would be brought to isolation centres.

“We have locked down the block, barring anyone from entering or leaving their homes,” he said.

Rahman said they would ramp up coronavirus testing to “at least” 100 per day from just five to 10 at present.

Bercaru said that since February, the entire health sector had been “working round the clock” to increase capacity for testing, isolation and treatment, as well as to train health workers and talk to communities.

The UN refugee agency said that 12 severe respiratory infection treatment centres were being established locally, and that up to 1,900 intensive care beds, five quarantine centres, and 20 isolation facilities were planned.

Humanitarian groups would also help with visits by health workers to people inside the camps plus home deliveries of food and fuel.

“We call on additional international solidarity and support to ensure an adequate response for this particularly vulnerable population,” a UNHCR statement said.

In early April authorities had locked down Cox’s Bazar — home to 3.4 million people including the refugees — after a number of COVID-19 cases.

Bangladesh restricted traffic in and out of the camps and forced aid organisations to slash manpower by 80 percent.

The country of 168 million people is under lockdown and has seen a rapid rise in coronavirus cases in recent days, with almost 19,000 and 300 deaths as of Thursday.

Senior US official Sam Brownback, who has visited the refugees said it was inevitable the virus would reach the “incredibly crowded” camps and spread “very rapidly”.

Daniel Sullivan from Refugees International called it the “realisation of a nightmare scenario”.

Shamim Jahan at Save the Children said there was the “very real prospect that thousands of people may die”, with “no intensive care beds” in the camps.

– No internet, many rumours –

Bangladesh has also been criticised for cutting the internet in the camps, which has restricted access to reliable information and spread false rumours.

“I have been calling on the Bangladeshi government to give internet access. It just seems to me ludicrous that they’re not,” Brownback told reporters in Washington.

With little prospect of being able to return to Myanmar — where army operations persist in Rakhine state — many of the refugees have in desperation tried to escape in rickety vessels.

Last month around 60 died in a boat stranded at sea for two months after being denied entry by Malaysia and Thailand because of coronavirus restrictions, survivors said.