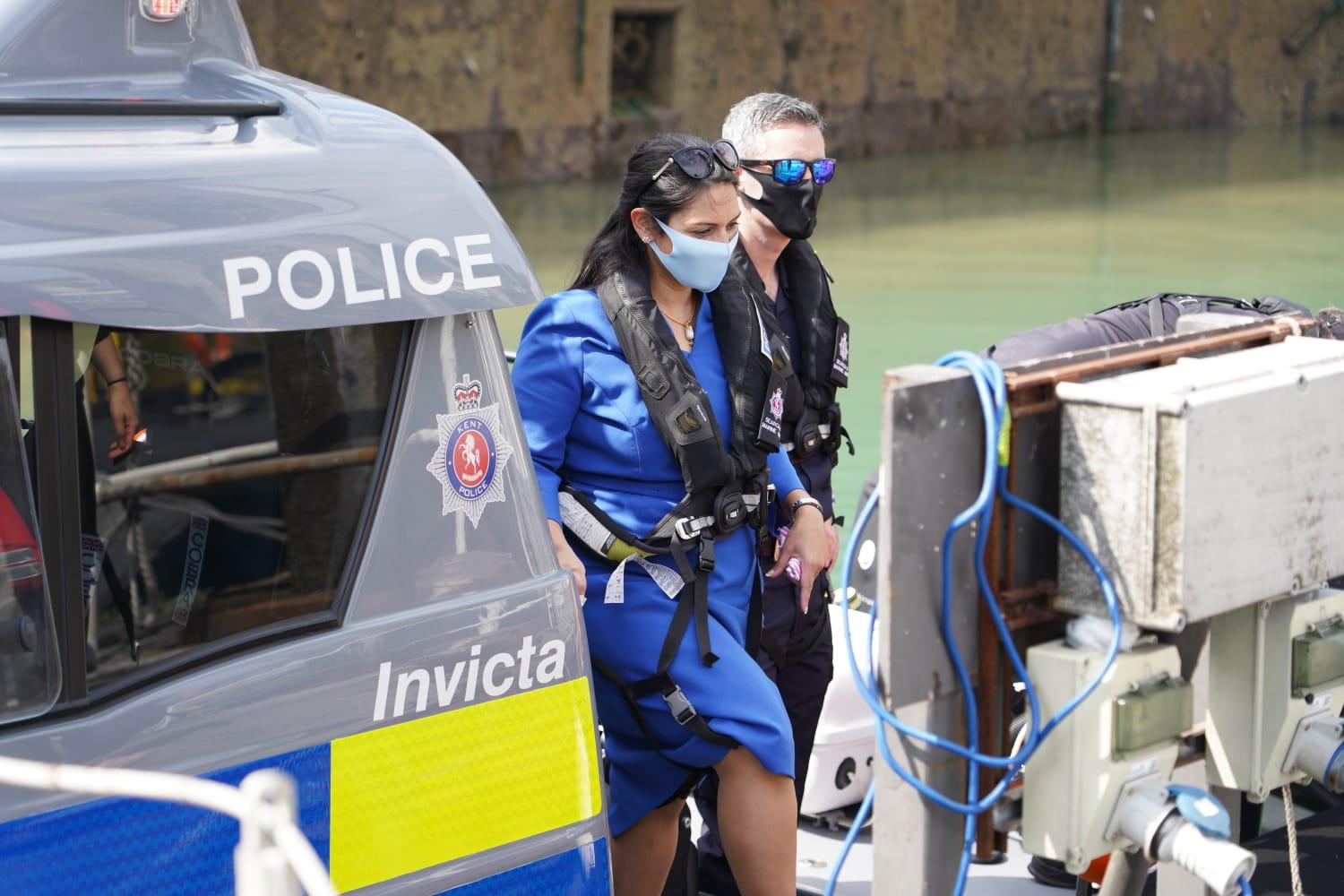 Home Secretary Priti Patel in Dover on August 10 to see how Border Force and other operational partners are dealing with illegal small boat crossings. (Photo: Twitter)

PRITI PATEL’s allies have hit out at Ben and Jerry’s after it railed on social media against her tough talk on Channel crossings.

The ice cream company seemed to target the home secretary via Twitter on Tuesday (11), commenting that the “real crisis” was “lack of humanity”.

“People wouldn’t make dangerous journeys if they had any other choice,” it said in a series of tweets, adding that “people cannot be illegal”.

While a Home Office source slammed Ben and Jerry’s as an “overpriced junk food” brand, a Tory minister took a swipe at its  “statistically inaccurate virtue signalling”.

Patel has of late taken a strong stance on rampant migrant crossings across the English Channel.

Last week, she had said the UK was working to make the Channel route “unviable” and named Dan O’Mahoney, a former Royal Marine, as Britain’s Clandestine Channel Threat Commander, creating a new role to deal with the issue.

“The number of illegal small boat crossings is appalling and unacceptably high. The figures are shameful,” Patel had said.

“We are working to make this route unviable and arresting the criminals facilitating these crossings and making sure they are brought to justice.

“Dan’s appointment is vital to cutting this route by bringing together all operational partners in the UK and in France.”

On Tuesday, Ben and Jerry’s tagged the home secretary and tweeted: “Hey @PritiPatel, we think the real crisis is our lack of humanity for people fleeing war, climate change and torture.”

Hey @PritiPatel we think the real crisis is our lack of humanity for people fleeing war, climate change and torture. We pulled together a thread for you..

In another tweet, the company said: “People wouldn’t make dangerous journeys if they had any other choice. The UK hasn’t resettled any refugees since March, but wars and violence continue. What we need is more safe and legal routes.”

It also went on to urge ministers to have “conversations” with “experts at organisations like Refugee Action” to find “solutions” to issues.

Responding the Twitter barrage, a Home Office told BBC: “Priti is working day and night to bring an end to these small boat crossings, which are facilitated by international criminal gangs and are rightly of serious concern to the British people.

“If that means upsetting the social media team for a brand of overpriced junk food, then so be it.”

Foreign Office minister James Cleverly, too, took a jibe at the company on Twitter: “Can I have a large scoop of statistically inaccurate virtue signalling with my grossly overpriced ice cream, please?”

Can I have a large scoop of statistically inaccurate virtue signalling with my grossly overpriced ice cream please. https://t.co/rkZFN9EO5y

“So it’s quite clear that more needs to be done.”

Prime Minister Boris Johnson maintained that the illegal migrant crossings were “very bad and stupid and dangerous”, and they needed to be stopped in cooperation with France.