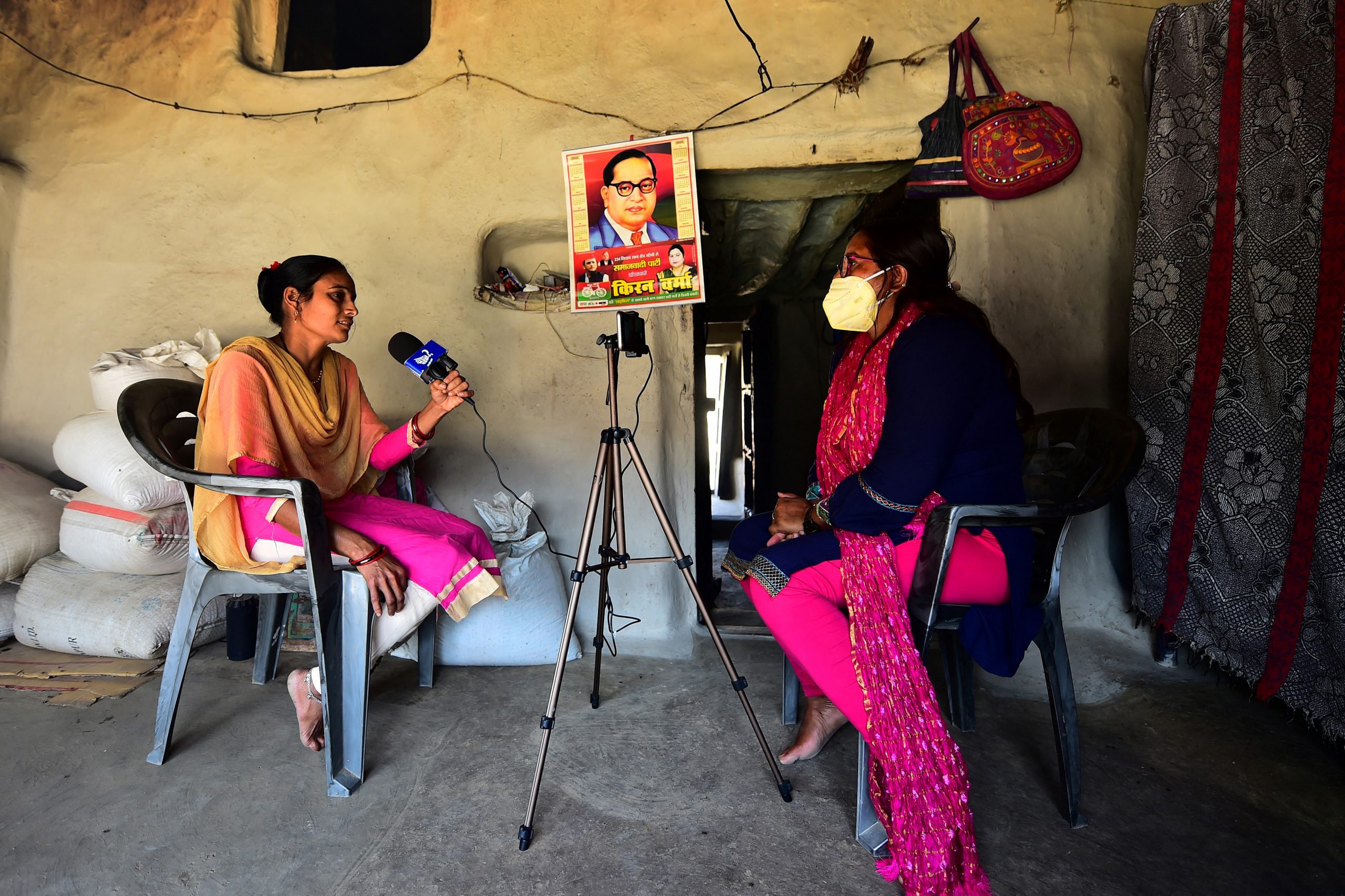 An all-women team of smartphone-toting, low-caste reporters who chronicle India’s hardscrabble heartland may give the cinema-mad country its first Oscar-winning film, after their own story became a critically lauded documentary.

The journalists of Khabar Lahariya (Waves of News) have built a huge following across Uttar Pradesh, a northern state with more people than Brazil, covering a beat that runs from cow thefts to sexual violence and corruption.

They have earned the respect of their village communities by covering local stories often overlooked by India’s established media outlets, but only after a relentless battle to be taken seriously by authorities — and even their own families.

“Just stepping outside the household was a big challenge… I had to fight many battles,” reporter Geeta Devi told AFP.

“Even my father was dead against me. He said, ‘You can’t do this work, this is not something that women are supposed to do.'”

As with her colleagues, Devi is a member of the Dalit community, the lowest rung in India’s rigid caste system and the victims of an entrenched culture of prejudice and humiliation.

In Banda, a riverside town a few hours’ drive from the Taj Mahal, Devi interviewed a woman rendered destitute after she was abandoned by her husband.

But as word got around that a Khabar Lahariya reporter was nearby, others approached her to implore coverage of their own woes — municipal neglect leading to a lack of clean drinking water and dirty, overflowing drains.

Some women took her aside to privately share their stories as victims of sexual harassment and violence — issues often hushed up under the weight of small-town stigma.

Formal discrimination against Dalits was abolished a long time ago, but they are still often barred from entering temples or houses belonging to higher castes, and remain targets of violence.

As members of a marginalised community and women in the deeply patriarchal villages of India’s Hindi-speaking heartland, Khabar Lahariya’s correspondents have a unique insight into local affairs, and Devi says she is proud to be part of a team working with a “feminist lens”.

Their endeavours are the subject of “Writing with Fire”, an Oscar-nominated documentary that has taken the film festival circuit by storm and already won the Special Jury Award at Sundance.

The fly-on-the-wall narrative shows dedicated journalists preparing to transition from their legacy newspaper operations to digital production, unbowed by their encounters with dismissive police and fearsome local strongmen.

“It’s a very inspiring story. It’s a story about women who give hope,” Rintu Thomas, the film’s director, told AFP at an Academy Awards preview event in Los Angeles.

“I think that is very strong and powerful, especially in the world that we are in right now where there is so much mistrust of the media,” she added.

India is home to the world’s most prolific film industry and cinema holds a rarefied place in national culture, with stars enjoying almost divine status and people often queuing to watch the same movie multiple times.

But no Indian-produced film or documentary has ever won an Academy Award, despite locally shot foreign productions “Gandhi” and “Slumdog Millionaire” each winning Best Picture in years past.

Parts of India have prospered in the three decades since market reforms brought a jolting end to decades of sclerotic, socialist-inspired central planning.

Khabar Lahariya works in areas left behind by the economic boom, where life has barely changed even as new wealth transforms the country’s urban landscape and culture.

Meera Devi, the outlet’s managing editor, says her work is driven by a passion for giving a voice to those left out of India’s success story.

“When I fight for the rights of the minorities, tribals and other marginalised sections of society — when these people get heard and get justice, I feel very good,” she said.

Born in a remote village and married at 14, Meera had to fight against the odds to get a college degree.

The 35-year-old joined the media house in 2006, soon after it began publishing, initially working on stories of cattle theft and tragic family disputes before moving on to local politics.

Her work has sent crooks to jail and shamed officials into ordering the repair of rundown roads, as well as charting the rising tide of Hindu nationalism in the country’s rural hinterlands.

“The men here are not used to seeing powerful women, especially in a field like journalism. But we are changing that outlook,” she said.

“We have proved that if women are given the right opportunities, we can achieve anything. Once you give women the freedom they deserve, you simply cannot stop them.”