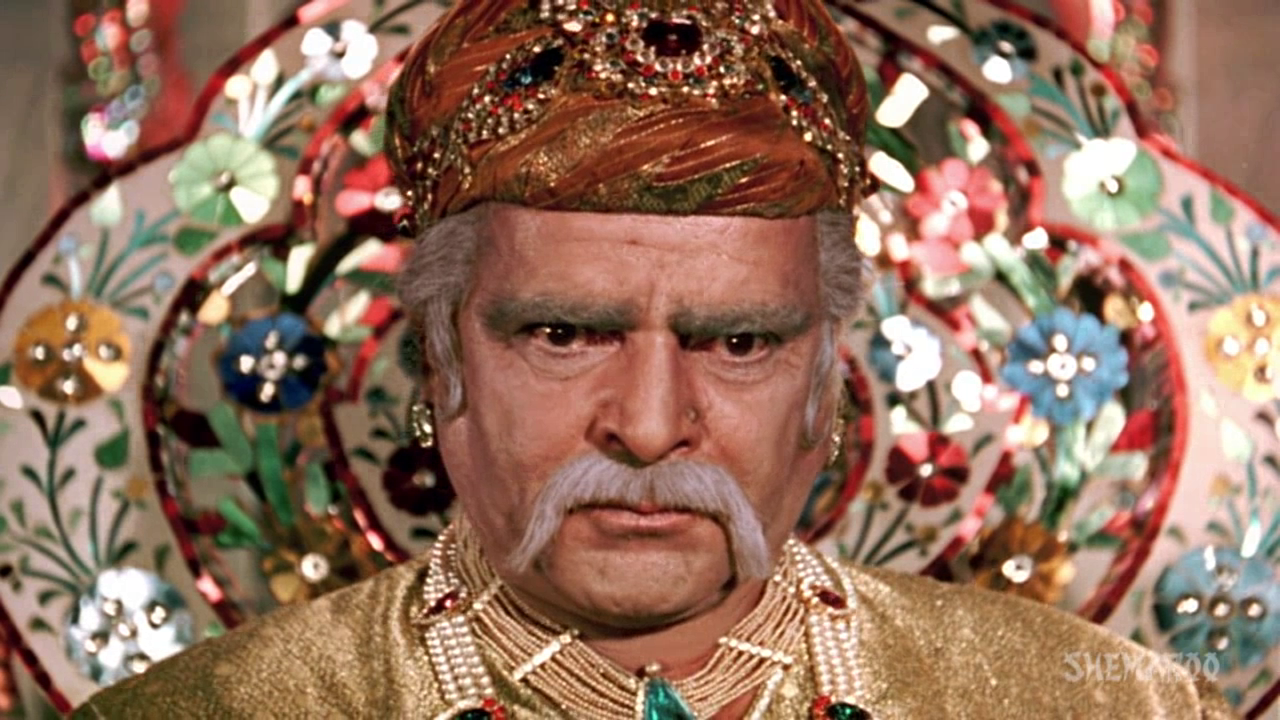 Prithviraj Kapoor as Akbar in Mughal-e-Azam

FATHER’S DAY SPECIAL: COUNTING DOWN THE 20 STAND-OUT PERFORMANCES AS A MALE PARENT IN HINDI CINEMA

ON SUNDAY (20), families across the world will be celebrating Father’s Day.

Eastern Eye decided to mark this annual celebration to compile a first-of-its-kind countdown of the 20 most memorable onscreen fathers in Bollywood. This list features a wide range of dynamic dads who made a major impact in Hindi cinema across different generations. They all appeared in movies that are well worth adding to any lockdown watchlist. 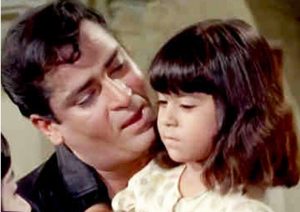 20. Brahmchari in Brahmachari (1968): The classic comedy-drama saw Shammi Kapoor portray a kind-hearted bachelor who adopts orphans and becomes a protective father figure to them, despite his own financial struggles. He develops a strong bond with the children, and such was the impact of the film that it would later inspire a character played by Anil Kapoor in Bollywood blockbuster Mr India (1987).

19. Rustam Behram Deboo in Ferrari Ki Sawaari (2012): One of the finest father-son stories ever made in Bollywood, this fantastic film often doesn’t get the credit it deserves. Sharman Joshi plays a father who will do whatever it takes to help his son realise his cricketing dream, even if it means stealing Sachin Tendulkar’s Ferrari. There is also an interesting bond with his own father, played by Boman Irani, in the must-watch movie.

18. Avtaar Kishan in Avtaar (1983): Rajesh Khanna plays a hard-working family man who is mistreated by his grown-up children and must start over with his wife. Despite being deeply hurt by his children’s actions, he overcomes hardships and builds himself up again. That theme of children mistreating their elderly parents would be explored again in Baghban (2003), with Amitabh Bachchan delivering an equally effective performance as the dad. 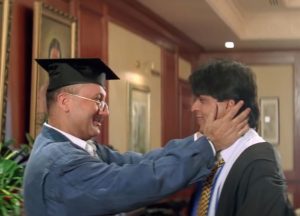 17. Dharamvir Malhotra in Dilwale Dulhania Le Jayenge (1995): No one plays a dad who is best friends with his children better than Anupam Kher. In this film, he portrays the fun-loving father fully supportive of his son, even though he is a failure, and backs his decision to win the hand of the woman he loves. Kher would repeat that lovable on-screen dad character in many films including Dil Hain Ke Manta Nahin (1991), Hum Aapke Hain Kaun (1994), and Kuch Kuch Hota Hai (1998).

16. Rohit Kumar in Akele Hum Akele Tum (1995): A movie that was heavily inspired by classic Hollywood drama Kramer Vs Kramer saw Aamir Khan play a devoted single father. When his wife leaves him, he steps up to look after his little boy and fights to keep him when she returns seeking custody of their son. The sensitive drama was one that connected with many viewers on a deeper level.

15. Raaj Batra in Hindi Medium (2017): The sleeper super hit saw late great actor Irrfan Khan play a determined dad willing to do whatever it takes to get his daughter into a good school, and that includes pretending to be poor. Along with his wife, he goes on a journey of discovery to find out what is the right thing to do. The film spawned a follow-up, Angrezi Medium (2020), which saw Khan reprise his role of a dutiful father. 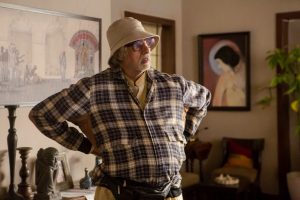 14. Bhashkor Banerjee in Piku (2015): The critically acclaimed and commercially successful comedydrama saw Amitabh Bachchan deliver a perfect portrayal of a hypochondriac widower who has a difficult relationship with his no-nonsense daughter Piku (Deepika Padukone). Bachchan beautifully injected realism into his role, and the fabulous fatherdaughter film won the lead cast a truckfull of welldeserved awards.

13. Lala Kedarnath in Waqt (1965): Balraj Sahni plays an affluent man who loses everything after a deadly earthquake and is separated from his whole family, including his young children. He spends his life looking for his family and is finally reunited with them. That character of a parent facing ruin after getting separated from his family would influence many lost-and-found films in subsequent decades, including all-time classics like Amar Akbar Anthony (1977) and Naseeb (1997).

12. Amol Arte in Paa (2009): The role of the young father portrayed by Abhishek Bachchan in this multiaward-winning drama was unique for many reasons. He played the estranged dad to a young boy with progeria and remarkably his own real-life father (Amitabh Bachchan) who is decades older, played his 12-year-old son. The deeply emotional drama remains one of the most original father-son stories ever told in Indian cinema.

11. DK in Masoom (1983): A film that was way ahead of its time featured Naseeruddin Shah as a happily married father of two daughters, who one day discovers he has a son from a past affair after the death of the boy’s mother. He must balance bringing the young child into his family and have him accepted by them, especially by his devastated wife, who sees him as a symbol of her husband’s infidelity.

10. Karan Shrestha in Maine Pyar Kiya (1989): The classic romance may be best remembered for the love story between the two young protagonists (Salman Khan and Bhagyashree), but it also had a memorable father role delivered brilliantly by Alok Nath. Unlike traditional Indian fathers, he sticks by his daughter and makes the spoilt rich young man who has fallen for her prove his worth by making an honest wage. Nath would go on to make the lovable father role his own in a string of successful films.

9. Mahesh/Rickshaw-walla in Kunwara Baap (1974): A number of big-name stars made cameo appearances in Kunwara Baap because it was a deeply meaningful movie. Mehmood plays an impoverished rickshaw puller who finds an abandoned baby and brings him up as his own. Even when the child develops polio, he loves him unconditionally and faces several obstacles in order to give him a good home. When the wealthy parents of the child come looking for him, he fights to keep his son.

8. Shankar in Shor (1972): The deeply emotional drama sees Manoj Kumar play a devoted father determined to raise money to help his mute son regain his voice. He goes through hardships to find money for the expensive operation for his son, but in a tragic finale, he loses his own hearing before he can hear his son’s voice again.

7. Yashvardhan Raichand in Kabhi Khushi Kabhie Gham (2001): Playing the fearsome patriarch of a family has become second nature for Amitabh Bachchan, and this was perhaps his finest turn. He portrays the wealthy father of two sons who falls out with the older one (Shah Rukh Khan), adopted by the family as a child. What follows is a fabulous drama that clocked up huge box-office figures globally. The stand-off scene between father and son will live long in the memory of audiences.

6. Ashwini Kumar in Shakti (1982): The classic cop drama featured arguably Bollywood’s two greatest ever stars – Dilip Kumar and Amitabh Bachchan – on-screen together for the first time, as father and son. Kumar is incredible as honest police officer Ashwini Kumar on a collision course with his son Vijay, who is on the wrong side of the law and ultimately does the unthinkable.

5. Rahul Khanna in Kuch Kuch Hota Hai (1998): The record-breaking film sees Shah Rukh Khan play a single father struggling to cope after the death of his wife. Then his young daughter tries to reignite the fire in his heart by reconnecting him to a lost love and what follows is an iconic journey filled with a rainbow of emotions. The scene where he explains the beauty of a mother to his daughter during a stage performance and how he, as a father, is trying his best, had everyone in tears.

4. Jai Prakash Paswan in Chachi 420 (1997): The brilliant Bollywood remake of Hollywood hit Mrs Doubtfire saw Kamal Haasan plays a recently divorced father desperate to spend time with his young daughter. The determined dad hatches a plan to dress up as kind-hearted nanny Lakshmi Godbole, and what follows is an unforgettable comedy of errors.

3. Mahavir Singh Phogat in Dangal (2016): Aamir Khan brilliantly portrays a character based on a real person in an uplifting story inspired by actual events. Khan went through an impressive transformation to play an Indian wrestler who coaches his daughters to glory. Such was the film’s amazing impact that Dangal became the highest grossing Bollywood film in history. The scene where he finds out that his daughter has won after hearing the Indian national anthem will live long in the memory and still gives everyone goosebumps. 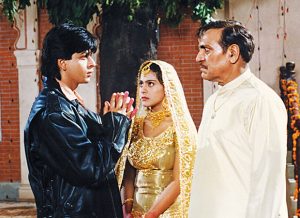 2. Chaudhary Baldev Singh in Dilwale Dulhania Le Jayenge (1995): Fathers in films have stood in the path of true love across different decades and this fiery turn by Amrish Puri ranks among the finest. Connected to his roots, he wants to follow tradition with an arranged marriage in India for his Britishborn daughter, but slowly has his seemingly cold heart melted and finally sees the meaning of true love. This record-breaking film connected with contemporary global audiences like no other. 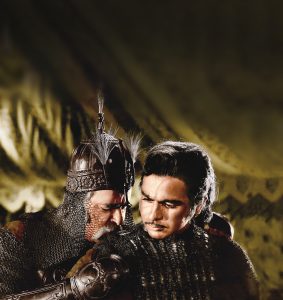 Akbar The Great in Mughal-e-Azam (1960): Prithviraj Kapoor made a name for himself as the ‘dad antagonist’ in the golden age of Indian cinema in a whole host of classic films, and no one has played that patriarchal role better. His finest turn was as fearsome emperor Akbar in Bollywood’s greatest film Mughal-e-Azam, and such was the power of his performance that he received top billing  in the film. One of Bollywood’s best onscreen fathers goes to war with his son Prince Salim, played by Dilip Kumar, and breathes fire into every scene he is in. His multi-layered portrayal also enabled him to show there was a heart beneath his steel-like exterior. Audiences weren’t the only ones impacted by Kapoor’s powerful performance, because Mughal-e-Azam director K Asif named his son Akbar Asif.

Unique father
NO LIST of Bollywood dads would be complete without mentioning Vicky Donor (2012). No one in commercial Hindi cinema has fathered more children than its lead character, Vicky Arora. The pathbreaking film saw Ayushmann Khurrana play a sperm donor who works for a fertility clinic and is, erm, really successful at what he does. Things get complicated when he falls in love and his secret occupation is revealed.