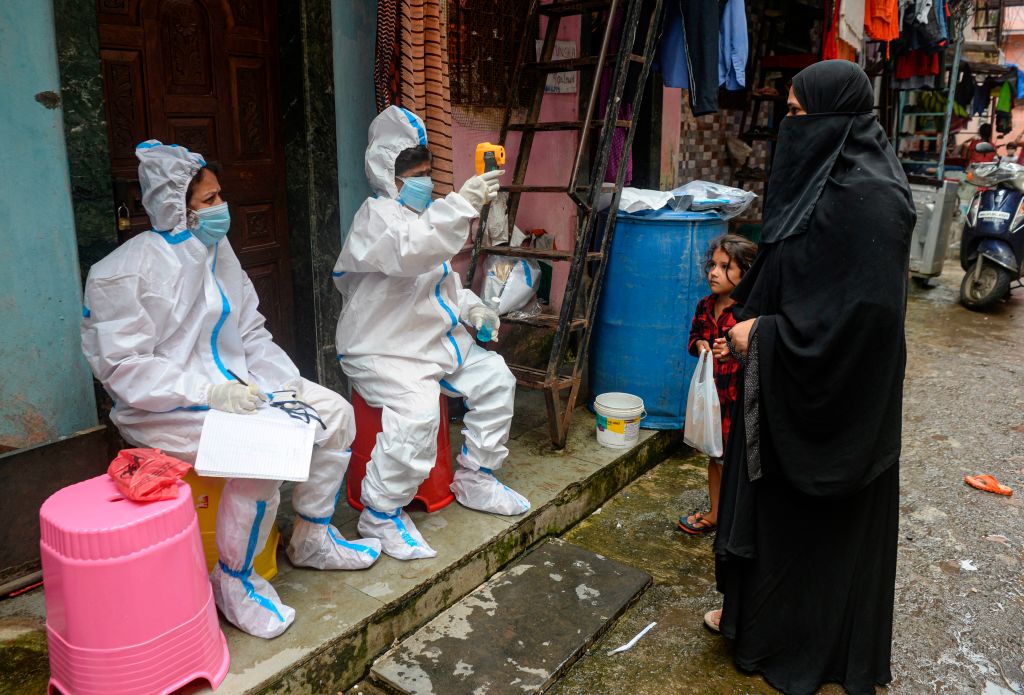 Health workers check the temperature of residents during a Covid-19 screening in the Dharavi slum, in Mumbai on August 11, 2020. (Photo: INDRANIL MUKHERJEE/AFP via Getty Images)

INDIA’S ability to rein in a surging coronavirus outbreak hinges on its 10 most populous states, Prime Minister Narendra Modi said on Tuesday (11), urging regional leaders to ramp up testing and contact tracing.

India has more than 2.2 million confirmed coronavirus infections, the third highest tally after the US and Brazil.

“If we can defeat corona in these 10 states, the country will win,” Modi said in a video conference with state chief ministers.

“We need to follow a new mantra — all those who have come in contact with an infected person should be traced and tested within 72 hours…. It has emerged from the discussion that there is an urgent need to ramp up testing in Bihar, Gujarat, Uttar Pradesh, West Bengal, and Telangana.”

Had an extensive interaction on the COVID-19 situation with Chief Ministers of 10 states. CMs highlighted the efforts by their respective Governments to tackle the pandemic.

India has reported at least 50,000 cases every day since July 30, and experts worry that the already burdened health system may not be able to take the strain as infections spread to the hinterland.

Experts have cited India‘s low testing rate as a cause for concern.

India currently has a mortality rate of 1.99 per cent, lower than the global average of 3.65 per cent, but Modi said state governments should aim to push it lower.

In recent days, the coronavirus has infected a number of Indian politicians, including former president Pranab Mukherjee, who was put on ventilator support after undergoing surgery, media reported on Tuesday.

Mukherjee, 84, president between 2012 and 2017, also led the federal defence, foreign and finance ministries over a decades-long career.