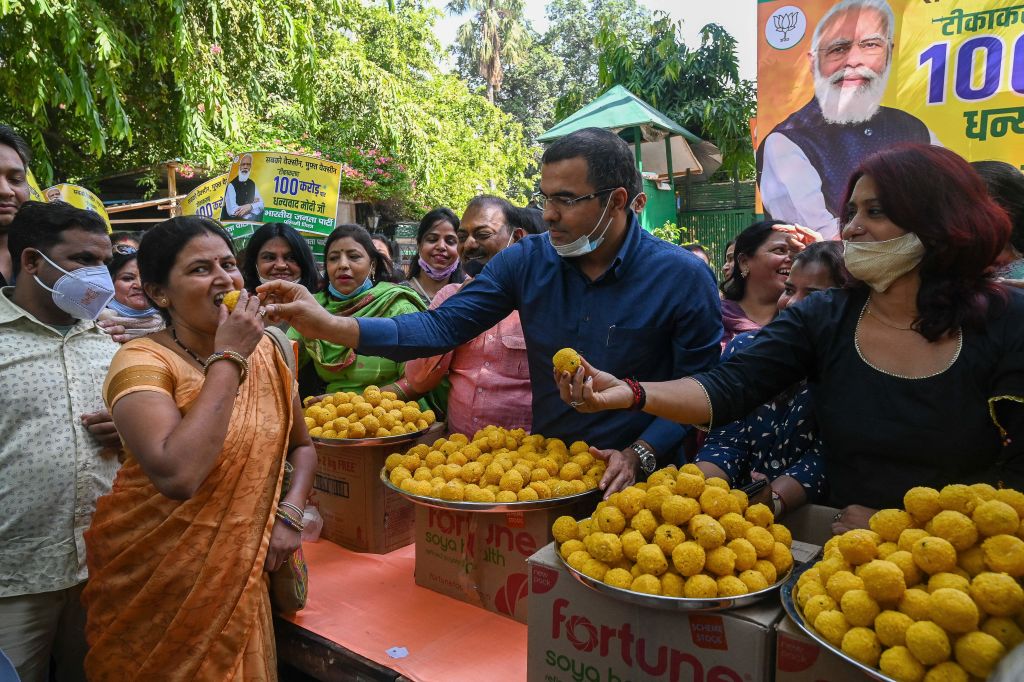 Bhartiya Janata Party workers distribute sweets to celebrate India administering its billionth Covid-19 vaccine against the Covid-19 coronavirus at a health centre in New Delhi on October 21, 2021. (Photo by PRAKASH SINGH/AFP via Getty Images)
Follow Us

INDIA administered its one billionth Covid-19 vaccine dose on Thursday (21) as it fights its way back from a devastating surge in cases that brought the health system close to collapse.

Prime Minister Narendra Modi hailed the feat as a “triumph of Indian science”, but authorities remain on guard for a new pandemic wave.

To mark the milestone, the Archaeological Survey of India (ASI) will light up 100 of its heritage monuments in colours of the national flag, officials said on Thursday.

About three-quarters of adults in the country of 1.3 billion people have had one shot and 30 per cent are fully vaccinated, according to government figures.

But hundreds of millions of Indians under 18 — who make up about 40 per cent of the population — have not had a single shot.

More than 200,000 people died in a devastating Covid wave from mid-April to mid-June. Hundreds of thousands of people were stricken with the Delta variant and many hospitals and crematoriums were overwhelmed.

Cases have since fallen sharply since. Fewer than 20,000 infections are reported each day and much social activity has resumed.

Mumbai, one of the worst-hit cities, recently reported zero Covid deaths in a day for the first time since the pandemic began.

In celebration of the vaccine landmark, Modi paid tribute to India’s health workers and monuments in the capital New Delhi were to be lit up in the national colours.

Neighbouring Bhutan and Sri Lanka hailed the milestone, and the United Nations Children’s Fund representative in India, Yasmin Ali Haque, said it was a “tremendous achievement”.

“As Indian families recover from the recent devastating Covid-19 wave, for many this milestone means hope.”

“Congratulations, Prime Minister @narendramodi, the scientists, #healthworkers and people of #India, on your efforts to protect the vulnerable populations from #Covid-19 and achieve #VaccinEquity targets,” he said in a tweet.

Dr Poonam Khetrapal Singh, Regional Director, WHO, South-East Asia, said: “Huge congratulations to India for marking yet another milestone- a billion Covid-19 vaccine doses administered. This extraordinary feat in a short span was not possible without strong leadership, inter-sectoral convergence, dedicated efforts of the entire health and frontline workforce and the people themselves.”

Only China’s government, which says it has given out more than 2.3 billion shots, has administered more doses than India.

The billion jabs were administered in 279 days despite shortages, which forced the world’s biggest vaccine producer to halt exports for several months.

Vaccine exports have tentatively resumed, with officials saying the “pharmacy of the world” will be back in full swing in 2022.

“I think it is unlikely that we will see a third wave that in any way resembles the second wave,” said Gangandeep Kang from the Christian Medical College, Vellore.

“The only situation where that can happen is if we have a completely new virus variant. Then it’ll be a new pandemic.”

India has the world’s second-highest number of cases at 34 million. Its 452,000 Covid deaths are the third-highest, behind the tolls in the US and Brazil.