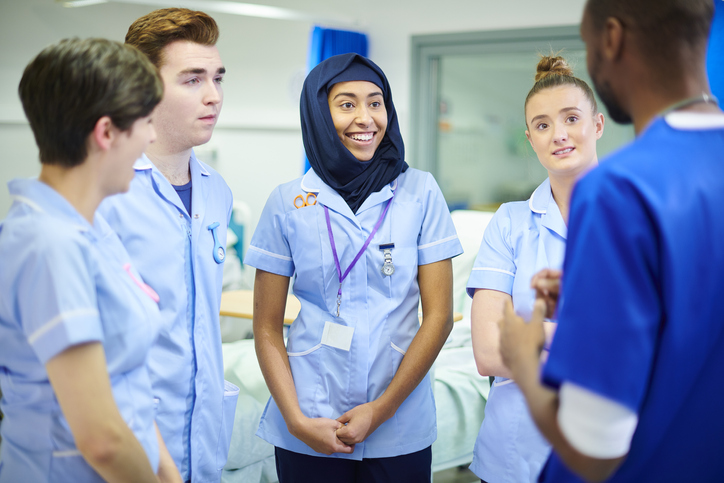 Britain’s National Health Service (NHS), which provides free healthcare funded from general taxation and welfare contributions, is one of the world’s largest and most cosmopolitan employers.

But the NHS — which listed 211 nationalities in England alone in 2020 — faces chronic staff shortages.

By 2029, the state-run service in England will face a shortfall of 108,000 nurses, according to the Health Foundation think-tank.

Now there are fears the crisis will further deepen due to a combination of shocks depleting its substantial foreign workforce: retirement, the coronavirus pandemic, Brexit and tougher immigration rules.

Syed, 86, belonged to a generation of medical professionals from ex-British colonies who filled labour shortages after World War II.

They were directed to poorer regions — often ex-industrial heartlands like northern England and south Wales — where recruitment was hardest and health needs greatest.

Even today, the life expectancy gap between deprived areas of northern England and the more affluent southeast is more than 10 years.

“Overseas doctors had no chance. You got a practice where no-one wants it,” Syed told AFP.

Syed and other immigrant doctors of his generation “flooded” Burnley, he remembered, helping to establish its first cardiology unit and improve midwifery services.

But they retired after 2000, creating a shortage in Burnley, mirrored in places where immigrants disproportionately filled healthcare roles.

As in other countries, the pandemic has traumatised and exhausted Britain’s frontline health and social care staff and created a huge backlog in treatments for other conditions.

In the year to March 2021, international travel disruptions meant 3,700 fewer nurses came to Britain than in the previous year.

Britain has become less welcoming and financially rewarding for EU staff after the 2016 Brexit referendum and the subsequent fall in the pound’s value, added Dayan.

In 2021, there were around 8,000 fewer nurses from European Economic Area nations on the official register than in 2016.

And more than half of EU nurses leaving Britain cited the country’s departure from the bloc as a reason for their decision, a 2020 Nursing and Midwifery Council survey suggested.

Syed remembered EU staff filling shortages in Burnley after his retirement and predicted “tremendous demand” again as their numbers diminished after Brexit.

Under Britain’s new points-based immigration system, migrants must meet salary and English proficiency levels and have an offer for a skilled job, although a special visa scheme exempts healthcare workers.

Naveen Keerthi, 42, runs a recruitment agency bringing foreign doctors to Britain and believes the reforms will help hire overseas staff, with a “surge” in applicants in the past four years.

And Dayan said the reforms will hit social care, where staff are not considered skilled and paid low wages.

The fate of social care, where trained carers look after vulnerable people in their homes and offer mental health services, is closely tied to the NHS.

Hospitals suffer greater pressures when patients cannot be discharged as adequate care services — often provided by cash-strapped local authorities — are unavailable for them to return home.

Social care has particularly suffered as Brexit sealed the “escape valve” of freedom of movement across the EU that had filled staff shortages, Dayan added.

The 42-year-old’s company works with the local NHS and has long recruited from abroad, especially the Philippines, but has only hired one-tenth of the staff required since the pandemic began.

Bland said her colleagues were “being pushed to the limit”, calling it “an existential crisis” exacerbated by pre-existing recruitment difficulties caused by low-paid, insecure work.

“The underlying problems are domestic in nature,” he stressed.