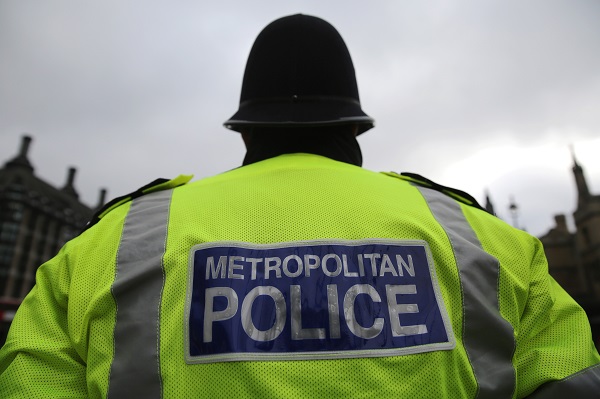 Metropolitan police rushed to a building near the North Brixton Islamic Cultural Centre on Brixton Road in south London on Wednesday (1), following reports of spray-painted slogans on a building near the centre (Photo: Dan Kitwood/Getty Images).
Follow Us

CAMPAIGNERS have dismissed the claim by the chief of Britain’s biggest police force that it has “transformed” and is no longer institutionally racist.

This year marks 20 years since the damning inquiry into the Metropolitan Police over its handling of the racist murder of black teenager Stephen Lawrence in London in 1993. The inquiry by Sir William Macpherson branded the force “institutionally racist”.

Met commissioner Cressida Dick was grilled by the Home Affairs Committee over the progress it has made in July and told MPs: “Do I think we are organisationally, systemically (racist)? I do not. I really do not.

“When I look at the today Met compared with the Met I knew, it is utterly transformed. For me, it is not a useful term (institutionally racist) at all now and I think it is a label that puts people off from engaging with the police, which we need.

“This reduces trust in the police, which is a bad thing, stops people joining, that is a bad thing, and generally affects transactions and the engagement on the street for my officers in a way that is unhelpful and ends up making people less safe, not more.”

However, Gurpal Virdi, a former Met detective sergeant who served with the force for 30 years, rejected Dick’s suggestions that the force is more “transparent, accountable, responsive” compared to the 1990s.

Virdi gave evidence to the public inquiry in 1999 and believes speaking out on discrimination led to him being falsely accused of racism, shunned by colleagues, turned down for promotion and wrongly accused of assault. He also submitted evidence to this year’s Home Affairs Committee’s inquiry.

He told Eastern Eye: “The Met is still institutionally racist as BAME officers are still suffering, in that promotions are not given, they not given opportunities to develop and they are more likely to face misconduct than their white counterparts.

“There is no accountability as the Home Affairs Committee inquiry has shown that Her Majesty’s Inspectorate of Constabulary, The Independent Office for Police Conduct and College of Policing have no power to take control over internal investigations involving racism.

“Racists officers are still being allowed to work and be promoted.

“Sir Peter Bottomley MP and I have been asking for an inquiry into false allegations made against me thus ruining my political and teaching ambitions. How can commissioner Dick say the organisation she leads is more transparent, accountable and responsive when to date the Met has continually blocked any sort of inquiry?”

It comes as new prime minister Boris Johnson announced plans to hire around 20,000 officers in England and Wales in a recruitment drive in September. Home Office figures show that forces lost 20,564 officers between March 2010 and March 2019.

Jabeer Butt, CEO of the Race Equality Foundation, told Eastern Eye: “Having a police force that protects everyone is key to us all feeling safe and secure.

“However, the evidence shows the Met still have significant challenges in becoming an organisation that works for and serves black and minority ethnic communities.

“From persistent inequalities in recruitment and progression within the Met through to the use of stop and search and the Gangs Matrix, black and minority ethnic people and communities are still subject to institutional racism.”

Dick, Britain’s most senior police officer, also told MPs she was not in “denial” over the challenges it faces in building trust with ethnic minority communities.

“I need absolutely no encouragement to keep on working on these issues that were raised initially 20 years ago. All the things that you have been talking about are things I talk about with my teams most days, but I do not think this label is helpful.”

She added: “We are so much better at dealing with racist incidents and crimes. But I would draw on a recent quote from Sir William himself who said there is obviously more to be done. He goes on to say: ‘But my feeling is that great steps have been taken in the right direction’.

“I agree, great steps have been taken in the right direction.”