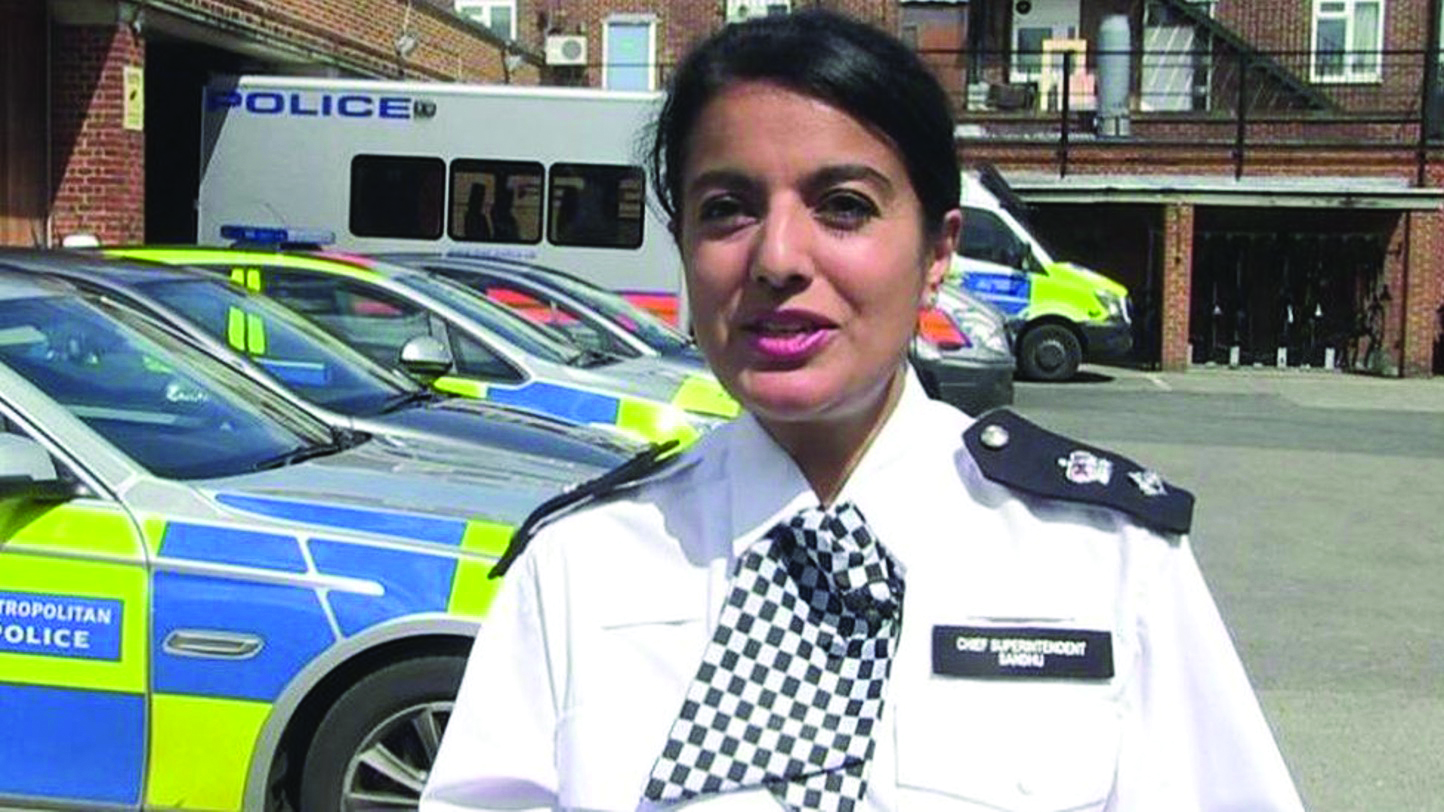 LIFE STORY: Parm Sandhu, the most senior Asian female ex-police officer in the Met, has revealed instances of bias and abuse in her new memoir

THE former highest-ranking Asian female police in the Metropolitan Police has claimed the force is still institutionally racist, recalling her experiences of discrimination as recently as 2019.

Chief superintendent Parm Sandhu was the most senior BAME woman in the capital’s police force, prior to her retirement two years ago. She was also the only non-white female to have been promoted through the ranks from constable to chief superintendent in the Met’s 189-year history.

However, Sandhu’s career was blighted by regular incidents of racism and sexism. She later successfully sued Scotland Yard for racial discrimination, claiming she was denied promotion and work opportunities due to her race and gender.

In an interview with Eastern Eye on the day her memoir Black and Blue was published last Thursday (10), Sandhu reflected on her years in the service and why she believes the force is still racist.

Sandhu was involved in an internal investigation into the murder of Stephen Lawrence, an 18-year-old black teenager murdered in a racially motivated attack in 1993. It caused widespread anger and led to the MacPherson report in 1999, which concluded the Met was institutionally racist.

More than two decades since the report, Sandhu does not believe progress has been made. She argued there needed to be “less words and more action”.

“We have lived through many different reports and reviews, but we don’t seem to be actually implementing anything,” said Sandhu. “Not all of the recommendations (from the MacPherson report) were implemented. Why is that?”

She added: “When we talk about institutional racism, I’m not saying all the police officers I dealt with were racist. What I am saying is some of the policies and some of the practices are racist, and they have a negative impact on people of colour, people like me.”

In her memoir, she revealed regular instances of racism and discrimination from other officers as well as the public. One time, she was called a racist slur by a passer-by and a colleague stepped in, but it was not to come to her defence.

“He said, ‘you’re not allowed to call her that word, only we can,’” she recalled. “He basically meant police officers could call me that word, but members of the public couldn’t. That made me feel about an inch tall.”

In 2019, Sandhu was required to take a security “vetting” interview and received an email asking her to discuss her Indian heritage. She was questioned on how often she went ‘home’ – meaning to India. The Met have since apologised for the incident.

“After 29 years’ service, of what relevance is that?” said Sandhu, who grew up in Birmingham. “I am not saying the person who sent that email was a racist, but the policy and the practices are. That’s where the label institutional racism comes in, and it fits.

Although there were numerous instances when Sandhu considered leaving the force, she stayed until her retirement in 2019. She said she believed “the only way you can make any positive change is by being part of that organisation”.

“If I had walked away, it would have been very difficult for me to make any positive changes,” she explained. “Being within the organisation, I was able to challenge [things], and I was able to say, this isn’t right.”

Sandhu recounted some of the most traumatising and horrifying cases she worked on during her tenure in her book. One of the most awful responsibilities of a police officer is to tell a loved one that their child or a family member has died, she revealed.

On one occasion, a man had killed his wife while their two children were in the house. Sandhu had to drive the children to their grandparent’s home and break the news to them that their daughter had been murdered. “It’s the worst news you can bring to any parent,” she said. She told the grandparents they needed to look after the children, but they did not understand why their son-in-law was unable to do so.

“I explained their son-in-law had killed their daughter and the children had been there… their whole lives fell apart. I can’t even begin to describe how it feels to tell them that,” she said.

“A lot of times, I wanted to sit there and cry with them, but as a police officer, you can’t be seen getting upset. If you show any ‘weakness’ as a woman, then you’ve had it as a credible leader – you have to be strong, you have to have those leadership qualities and you have to deal with the most awful things.”

Sandhu said she had strategies in place to help her come to terms with the everyday drama and trauma of life as a police officer. She used fitness as a coping technique. “I would either go for a run or go to the gym,” she said. “You’ve got to get (the things you’ve seen) out of your mind because it’s really not good for your mental health.”

Despite experiencing racism, sexism and trauma in the force, Sandhu was adamant she would choose the same career path again. She would recommend policing as a job too. “If anyone approached me now and asked, is it a good career? I would say, yes,” she revealed. “It’s an absolutely fantastic experience, knowing you’re making a difference.”

Although she is not in the service any more, Sandhu continues to mentor new recruits on an independent basis. Aware that many will be reluctant to voice any anxieties in the job to outsiders, she said she was there to listen to any concerns they may have. She said it was important to try and make the path easier for those following in her footsteps.

“Serving police officers cannot have honest conversations with people outside the organisation, because there’s always that worry – it’s going to either be used as a smear campaign in the local press, or it’s going to go back to their bosses,” she explained. “I am mentoring a number of individuals, just to try and make it a little bit easier for them as they progress through their careers.”

As well as her experience in the police, Sandhu’s book also reflects on her early life growing up in Birmingham. Though she came from a traditional Sikh family, Sandhu recalled not conforming with the “quiet, unassuming and almost invisible role traditionally played by young girls from the Sikh community”.

“I would speak without waiting to be spoken to, and would not readily merge into the background, allowing my brothers to take centre stage,” she wrote.

As a teenager, Sandhu continued to go against the typical expectations of Sikh girls. She listened to pop and reggae music and pestered her parents to let her attend school discos, but little did she know that they were planning to marry her off to an older man.

At 15, Sandhu was told she was going to marry a 21-year-old man whose family came from the same region in Punjab as her parents. Despite being horrified at the prospect, she was forced into marriage. After enduring years of abuse from her husband and his family, Sandhu fled to London with her infant son.

Her experience influenced her passion for helping other victims throughout her career, she admitted. She was the London lead for criminality involving honour based abuse, female genital mutilation (FGM) and forced marriages, coordinating the work of three different forces – the Met, the British Transport Police and the City of London Police.

One of her motivations behind writing the book was to highlight the fact that anyone can be a victim of domestic violence and honour-based abuse, she said. “I managed to take steps to get myself out of that situation and reinvent myself so I could make a difference,” the mother-of-two revealed. “For anyone who thinks they are trapped, I want them to know there is always a way out – you’ve just got to be able to find it and be brave enough to look for it.

“Even if my story is an inspiration to one young person, I want them to know you don’t have to stay in that situation and be controlled for the rest of your life.”

However, Sandhu is keen to emphasise Black and Blue is not a story about a victim – it is about a fighter. “I would like people to read my memoir as an inspiration,” she said. “(I want it to be) a guide to say you can carry on, you have got the strength and keep pushing those doors open.”

Black and Blue: One Woman’s Story of Policing and Prejudice, by Parm Sandhu with Stuart Prebble, is published by Atlantic Books and available now.