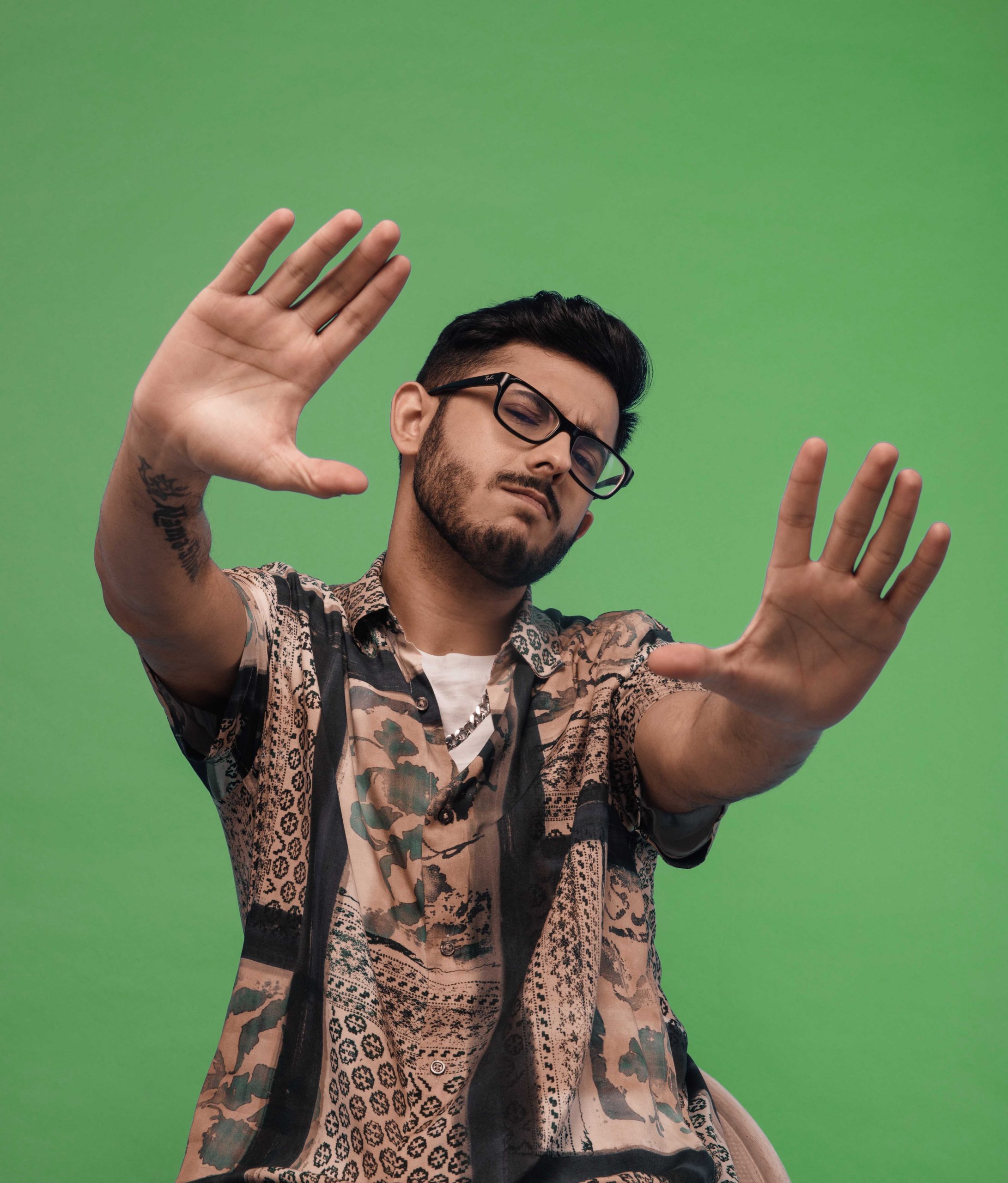 The 22-year-old YouTuber, streamer, gamer and rapper has blazed a trail with explosive videos that have gained global success. He has worked with major brands, interviewed stars like Tom Cruise, raised money for charity, signed a Bollywood film and regularly gets over 30 million views per video, with one being viewed over 242 million times. His amazing achievements have inspired others to follow in his footsteps and are a reward for a talent who first started uploading videos as a 10-year-old.

What do you remember about your first YouTube video?
At the age of 10, I created my maiden video, based on a Windows software, under my first YouTube channel Ajey_11, which was shot from my living room. It garnered zero views.

Did you ever imagine being so incredibly successful at such a young age?
Not even in my wildest dreams! I just kept working hard, not thinking too much about the end result. Success, fame, and money aren’t really orgasmic for me. It’s the adulation and support of my family, and fans that is important for me.

Which of your videos has been your favourite?
Uncanny Roaches! I always toyed with the idea of experimenting with animation since childhood and my style of roast comedy is better leveraged with animation, which breaks away from the limitations of live action. I’ve been trying to pursue animation since 2017, but it happened after many a trial and error over the years. It took nearly two months to perfect this entire series. I’ve also returned to my older methodology as I feel my creative evolution has taken a full circle.

What do you mean?
It’s an upgraded version of CarryMinati and the whole goal was to present the best video of my lifetime. At the start of my career, it was pure passion play for me, quality over quantity, and I’ve adapted to that mindset with this video. Being true to my art, circumventing the pressure to deliver and letting the magic happen organically and authentically.

What has been the secret of your amazing success?
I focus on the process rather than the outcome. I feel, if you work on something with all your heart and give 200 per cent then results will follow. Persistence has been a major driver in my success. As relayed to me by my fans, my USP is relatability and authenticity. My biggest win is the love and support I get from the masses by not being biased to any character and just being myself.

Has having tens of millions of subscribers and success put pressure on you?
Like Spiderman said, “with great power, comes great responsibility”. While what I do appears to be the most entertaining job on the planet, there are many shortcomings that tag along with the responsibility of being Asia’s number one YouTube creator and adds up to the whole pressure. It’s not enough to simply generate great content. The audience expects consistency, novelty, and frequency if you want to stand out. Without these, it’s incredibly easy to slip off the radar and lose favour with the algorithm that gave you your success. The pressure helps me build the best version of myself.

Where do you draw your inspiration from?
The love from my fans. There are times when I’m creatively challenged and feel this will be my last video and now, I will do something else, but that day never comes as I recall the countless emails, messages and comments of fans talking about how my videos helped them overcome difficult situations like depression, anxiety, and stress. This motivates me every single day, without flinching an eyelid. That surreal bond keeps pulling me back into content creation like a magnet. It’s like I was destined for this.

How do your family feel about your colourful language in videos?
My family trusts that I’m a responsible son and world citizen and wouldn’t do anything that is detrimental to society. My colourful language is a part of my on-screen reel depiction and it’s just a role I play, which doesn’t make it my reality.

How do you feel about being a hero and role model for your fans?
I don’t consider myself a hero or role model. I am more like an outlet where people can forget their worries and relax. This was one of the reasons I started my second channel CarryisLive, so I could connect with them on a personal level. My end goal was to positively impact as many lives as possible through my art and passion. Just like actors and musicians I am here to entertain and allow the common man to escape momentarily from the clutches of mundane living.

Tell us more…
If you look around, cases of stress and depression are constantly on the rise. People have forgotten how to be just content and happy. Among all this, the most fulfilling part is that I can inspire people to live optimistically. I can bring smiles to millions of faces without having to actually do this in person, and that’s so motivational.

Who is your own role model?
My parents are my guiding light in good and bad times. My family has always been my day one people and priority. They help me stay humble and disciplined amidst all the success. There can be nothing more gratifying than seeing your parents beam with happiness at their children’s growth. There was a time when they were hesitant about my life’s choices, and to have them believe in and appreciate my true potential has been satisfying.

What made you want to be part of Bollywood with the movie MayDay?
MayDay isn’t my full-fledged debut. It’s more like an extension of what I do. I dedicate 10 hours in a day for content creation, which I pray never takes a backseat. I’d like to consider that as my passion and calling. Acting and music is a medium where I can showcase my art to a more varied audience. For me personally, my authentic acting innings will happen when I secure an opportunity to dedicate myself wholeheartedly to the art unflinchingly. Everything else I do right now I consider as a special appearance.

What did you like about MayDay?
It was when I heard I am supposed to be essaying my own character (CarryMinati). I eat, breathe, sleep, and live my character every single day. It has been quite a novel experience. I learnt a thing or two about acting from Ajay Devgn sir. YouTube is my first love and that will never be compromised on. I was working with minimal sleep while prepping for my debut film, as I was also simultaneously working on my YouTube content. My business partner and manager, Deepak Char, has multiple acting offers on the table, but I am very selective of what and who I associate with, since I’m in no hurry to get rich and famous and be known as the next Bollywood star to watch. I want to focus on quality over quantity as I need to resonate with what I align with. The film shoot was very therapeutic and gave me perspective.

A lot of people like watching you, but what do you like watching?
I like to watch anime. I feel it is still very underrated in India. I have plans of making an anime web series in the future.

Tell us about your foray into music…
Music helps me express myself better since I’m quite the introvert and aids me to speak my soul language. The response to my music releases has always been encouraging and motivates me to work harder. I am gaining a lot of interest towards music now, which is part of my primary passion along with gaming and content creation. I am taking my time in harnessing my skills in a more disciplined fashion, so that I can drop songs more frequently.

Has lockdown changed you in any way?
Lockdown gave me time to introspect upon my life. I have started to appreciate small things in life. Earlier, we were so tied up in knots with daily schedules and so busy chasing a future that we have forgotten how to live and enjoy the present. During lockdown, I was pleasantly surprised to see how little we need to live a comfortable life and how human connections are more important than materialistic possessions.

What advice would you give those wanting to follow in your footsteps?
My numero uno advice would be to not fall prey to the rat race of likes and followers and be unique in the content you create. Good content is the only way to build an organic and authentic subscriber base. Please don’t allow the concept of followers or likes influence your commitment to the art. Create content because you’re passionate about it and see merit in what you have to offer to the world.

What’s your plan going forward?
To represent India on the world stage when it comes to content creation, music, and gaming. To further stretch my wings and keep flying, and create a sequel to Uncanny Roaches.

Is it fair to say that you are fearless?
You can say so. My parents have always encouraged me to not let my fear hold me back. They made me understand fearlessness does not mean lack of fear; it means that you are able to conquer your mind and rise above it. I feel that one should be the right kind of fearless to be an achiever in life.

If you could master something new, what would it be?
To learn the art of saying nothing at all. Silence is a pretty difficult discipline to master, especially given what I do for a living. Hypothetically, I’d love to create a video where fans telepathically understand what I’m trying to convey.

You always speak your mind. Do you want to comment on something that you feel very strongly about?
I’d say it’s time we become more compassionate as human beings and stop the selfish mindset and reach out to people in need. The human divide needs to be judged less around the criterion of being rich or poor and be more skewed towards qualities of love, peace and charity.

What is the biggest life lesson your journey has taught you?
To be the best version of yourself always and never let other people’s opinion dim your shine.