Kaleem Ullah Khan as just a teenager when he conducted his first experiment in grafting, or joining plant parts to create new mango varieties. 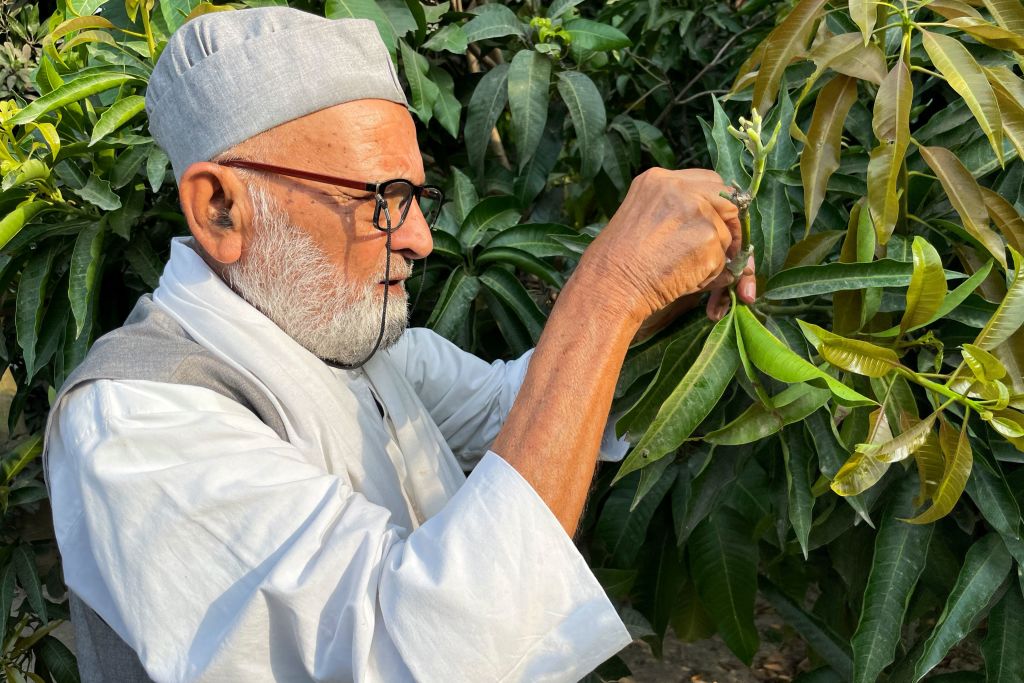 Kaleem Ullah Khan, locally known as the Mango Man, shows how he grafts different varieties of mangoes on a 100-year-old tree at his farm in Malihabad, some 30 kms from Lucknow. – India is the largest producer of mangoes, accounting for half the global output. Malihabad, in the northern state of Uttar Pradesh, has more than 30,000 hectares of orchards and accounts for nearly 25 percent of the national crop. (Photo by MARYKE VERMAAK/AFP via Getty Images)
Follow Us

Every day, Indian octogenarian Kaleem Ullah Khan wakes at dawn, prays, then ambles about a mile to his 120-year-old mango tree, which he has coaxed into producing more than 300 varieties of the beloved fruit over the years.

His footsteps quicken as he draws nearer and his eyes light up as he peers closely at the branches through his spectacles, caressing the leaves and sniffing the fruits to see if they are ripe.

“This is my prize of toiling hard in the scorching sun for decades,” the 82-year-old said in his orchard in the small town of Malihabad.

“For the naked eye, it’s just a tree. But if you see through your mind, it’s a tree, an orchard, and the biggest mango college in the world.”

The school dropout was just a teenager when he conducted his first experiment in grafting or joining plant parts to create new mango varieties.

He nurtured a tree to produce seven new kinds of fruit, but it blew down in a storm.

But since 1987, his pride and joy have been the 120-year-old specimen, a source of more than 300 different types of mango, each with their own taste, texture, colour and size, he says.

One of the earliest varieties he named “Aishwarya” after Bollywood star and 1994 Miss World beauty pageant winner Aishwarya Rai Bachchan. To this day, it remains one of his “best creations”.

“The mango is as beautiful as the actress. One mango weighs more than a kilogram (two pounds), has a tinge of crimson to its outer skin and it tastes very sweet,” Khan said.

Others he named in honour of Prime Minister Narendra Modi and cricket hero Sachin Tendulkar. Another is “Anarkali”, or pomegranate blossom, and has two layers of different skin and two different pulps, each with a distinctive aroma.

“People will come and go, but the mangoes will remain forever, and years after, whenever this Sachin mango will be eaten, people will remember the cricketing hero,” said the father of eight.

The leaves are a patchwork of different textures and smell. In some places, they are yellow and glossy, and in others, a dark, dull green.

“No two fingerprints are the same, and no two mango varieties are similar. Nature has gifted mangoes with traits like humans,” Khan said.

His method for grafting is intricate and involves diligently slicing a branch from one variety, leaving an open wound into which a branch from another variety is spliced and sealed with tape.

“I will remove the tape once the joint becomes sturdy, and hopefully, this new branch will be ready by next season and bear a new variety after two years,” he explained.

Khan’s skills have won him numerous accolades, among them one of India’s highest civilian honours in 2008, as well as invitations to Iran and the United Arab Emirates.

“I can grow mangoes even in a desert,” he says.

Climate threat
India is the largest producer of mangoes, accounting for half the global output. Malihabad, in the northern state of Uttar Pradesh, has more than 30,000 hectares of orchards and accounts for nearly 25 per cent of the national crop.

Mostly owned by families for generations, the orchards are a mango lover’s paradise, with the best-known variety possibly the melt-in-the-mouth Dasheri, named for the nearby village where it originated in the 18th century.

But farmers are worried about climate change, with a heatwave this year destroying 90 per cent of the local crop, according to the All-India Mango Growers Association.

The number of varieties has also fallen, which Khan blames on intensive farming techniques and the widespread use of cheap fertilisers and insecticides.

Growers also plant too many trees packed too tightly together, leaving no space for moisture and dew to settle on the leaves, he says.

But he still has a good life, he says.

“I recently moved into a new house inside the farm to be closer to my beloved tree, which I’ll keep working on till my last breath.”