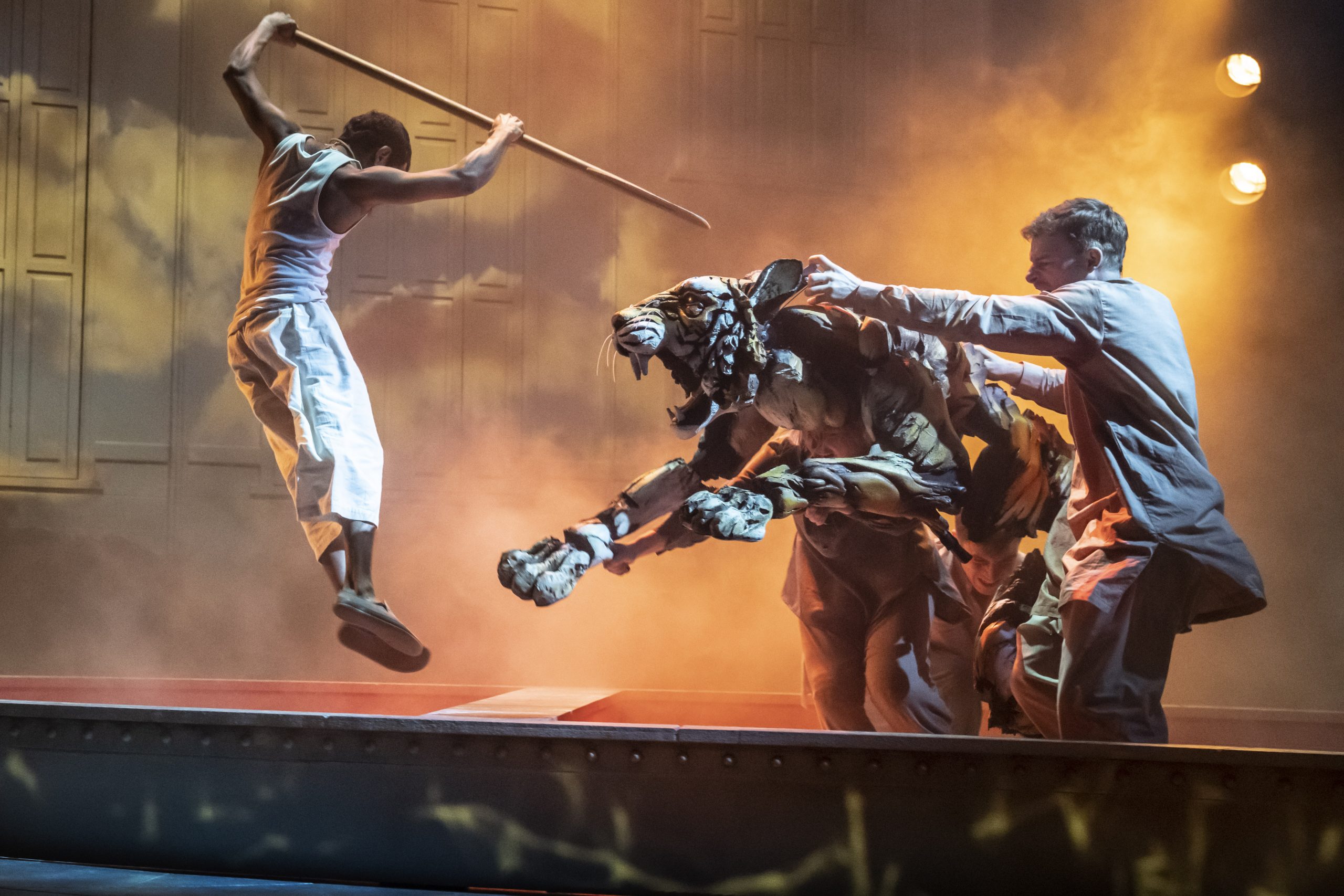 ONE can only fervently hope that Omicron doesn’t put paid to Life of Pi, Lolita Chakrabarti’s “magical” adaptation of Canadian author Yann Martel’s Booker Prize-winning novel from 2002, at Wyndham’s Theatre in the West End.

This is theatre at its best, but it goes deeper than entertainment, for it poses a fundamental question – is there a God?

My sense after watching the two-hour play is that the audience is encouraged to believe there is; although, to be sure, people are left to make up their own minds.

“Which is the better story?” asks Pi Patel at the end.

The character of Pi, who is on stage for the entirety of the production, is played by Hiran Abeysekera, who sustains the show with an amazing performance.

Pi is a 16-year-old boy who survives a 227-day journey across the stormy Pacific Ocean in a small boat after a ship wreck. He has for company a ferocious Royal Bengal tiger, Richard Parker, so named because of a clerical error.

The boat’s previous occupant had been a hyena which had been killed by the tiger. But this seemed like natural justice because the hyena had devoured a zebra, Black & White, and a much-loved orangutan, Orange Juice.

Pi tells his story in flashback from a hospital bed after he and Richard Parker wash up in Mexico at journey’s end.

However, his account of “cohabitation” with a tiger is just not believed by Mr Okamoto (David KS Tse), who has come from Japan to debrief the boy, the only survivor after the sinking of the Tsimtsum.

This was the Japanese ship that was ferrying the Patel family zoo from Pondicherry in south India to a new life in Canada.

But the alternative account is horrific, which is that the hyena, zebra and orangutan had represented the ship’s chef, a sailor and Pi’s mother, Amma.

The chef had killed and eaten the sailor and Amma; and Pi, in turn, had killed their killer. Whether he, too, had engaged in cannibalism is left unsaid.

“Which is the better story?” Pi asks again.

His question is directed at Mr Okamoto and also at Lulu Chen (Kirsten Foster), the more sympathetic immigration official who has come to prepare his entry papers for Canada.

Both finally admit they prefer the “animal” story – and indeed the audience is encouraged to think the same. And for that to happen there must surely be a
God. People of faith who come to see Life of Pi will surely nod knowingly in their seats.

In his report to the owners of the shipping company, Mr Okamoto prudently skips mention of the tiger and merely states the cause of the sinking of the ship cannot be established.

To me, the exchanges between young Pi and an initially incredulous Mr Okamoto are almost at the heart of the play.

Along the way we see breathtaking puppetry. Even though we can spot scurrying feet and moving hands beneath the puppets, the hyena comes across as a particularly nasty piece of work, as it rips apart first the zebra and then
the orangutan.

The huge tiger is clearly a creature to be feared – and this makes its transformation as an object of friendship and love for Pi all the more impressive. The tiger had, at first, viewed Pi as suitable prey, but comes to depend on him after the boy provides him with a steady supply of fish.

The way the boat emerges on stage, surrounded by water and luminescent fish and starry skies above, is a triumph of technical wizardry. Others will find God in the beauty of nature – as Pi does.

All the members of the cast, from Mina Anwar as Amma to Raj Ghatak as Mamaji and Panditji, Tom Espiner as Father Martin and Commander Grant-Jones, and Nicholas Khan as Pi’s father, blend in perfectly so a complex tale is simply told.

A big part of the credit for that must go to Chakrabarti’s writing skills. People who have not read Martel’s novel or seen Ang Lee’s 2012 film version are not at a disadvantage.

What lifts the play are the snatches of humour. When Richard Parker is finally given a voice, Pi is puzzled: “Why do you have a French accent when you were born in Bangladesh?”

When Richard Parker asks Pi, a vegetarian, to list his favourite food, he reels off a string of spicy south Indian dishes, including “rasam”.

But when he goes days without water, Pi is forced to stab and drink the blood of a gentle turtle, which he loathes doing: “How can you be a Hindu if you eat meat? I’m Hindu – I’ve never eaten meat in my life.”

Perhaps it is worth giving Jasminder Singh a mention. He figured recently in Eastern Eye’s Asian Rich List (ranked 10th with £1.5 billion).

His group, “the Edwardian Hotels London is proud to be the official hotel partner of Life of Pi in the West End”. Presumably those coming from out of town or from abroad to see Life of Pi can stay at his nearby super-boutique hotel, The Londoner.

God and the pandemic willing, Life of Pi looks set for a long run – and justly so. For Asian audiences, it is probably the best thing since Andrew Lloyd Webber’s Bombay Dreams in 2002.

On the night I went, Martel and Chakrabarti came on stage afterwards for a Q&A with the play’s director, Max Webster.

Martel used the word “magical” to describe the stage adaptation. He took four and-a-half years to write the book, after spending two years on research. The author, who lives in Saskatchewan, where people lead an isolated existence
even without a pandemic, described Canada as essentially a “secular” society.

His view of religion changed after a backpacking trip to India, which also planted the idea of a book: “In India you see religion everywhere. People take it seriously – sometimes too seriously. You cannot prove God, yet millions
believe in God.”

This view was, in essence, the debate in hospital between Pi and Mr Okamoto.

Chakrabarti said she had loved the novel since first reading it in 2002. In her adaptation, she had tried to examine how “faith” affected people’s lives.

She revealed she had assumed that in Pi’s alternative story, the one in which people had engaged in cannibalism was “the true version”.

But when she turned to Martel for guidance, the author assured her this was absolutely not the case.

Life of Pi is now playing at Wyndham’s Theatre in London.