Kriti Sanon on Adipurush: One of my most exciting projects

Kriti Sanon has many interesting films in her kitty right now, and one of them is Om Raut’s Adipurush which also stars Prabhas and Saif Ali Khan in the lead roles. Recently, Kriti had an interaction with her fans on Instagram and spoke about the movie.

When a fan asked her about Adipurush, the actress replied, “One of my most most exciting projects! Totally different experience.. loving every bit of it! @omraut can we resume soooonnn.” 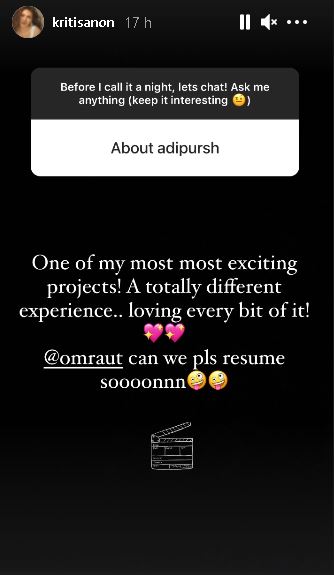 The shooting of the film was stalled due to the lockdown in Maharashtra. There were reports that the makers might shoot the movie in Hyderabad, but there was no update on it.

Adipurush is based on Ramayana and Kriti will be seen playing the role of Sita in it. Meanwhile, Prabhas will be seen as Lord Ram, and Saif will portray the character of Raavan.

During the interaction with her fans, the actress also wrote about her first co-star Mahesh Babu. Kriti had made her acting debut with the Telugu film 1: Nenokkadine in which she was paired opposite Mahesh Babu.

When a fan asked her about the Telugu star, Kriti replied, “Best! My first ever co-star! So humble and so amazing. I hope I get to work with him again… (Sorry thats 19 words).” 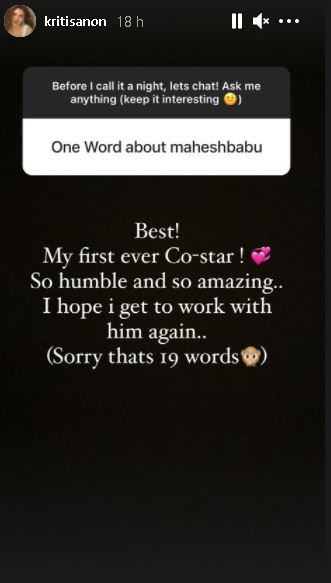 Kriti will next be seen in Mimi in which she will play the role of a surrogate mother. There have been reports that the film might get an OTT release. When a fan asked Kriti about Mimi’s release, she said, “I am not allowed to tell you, but I know it. So, basically, it is very very soon and that’s all I can say.”

Directed by Laxman Utekar, Mimi is the remake of the Marathi film Mala Aai Vhhaychy.