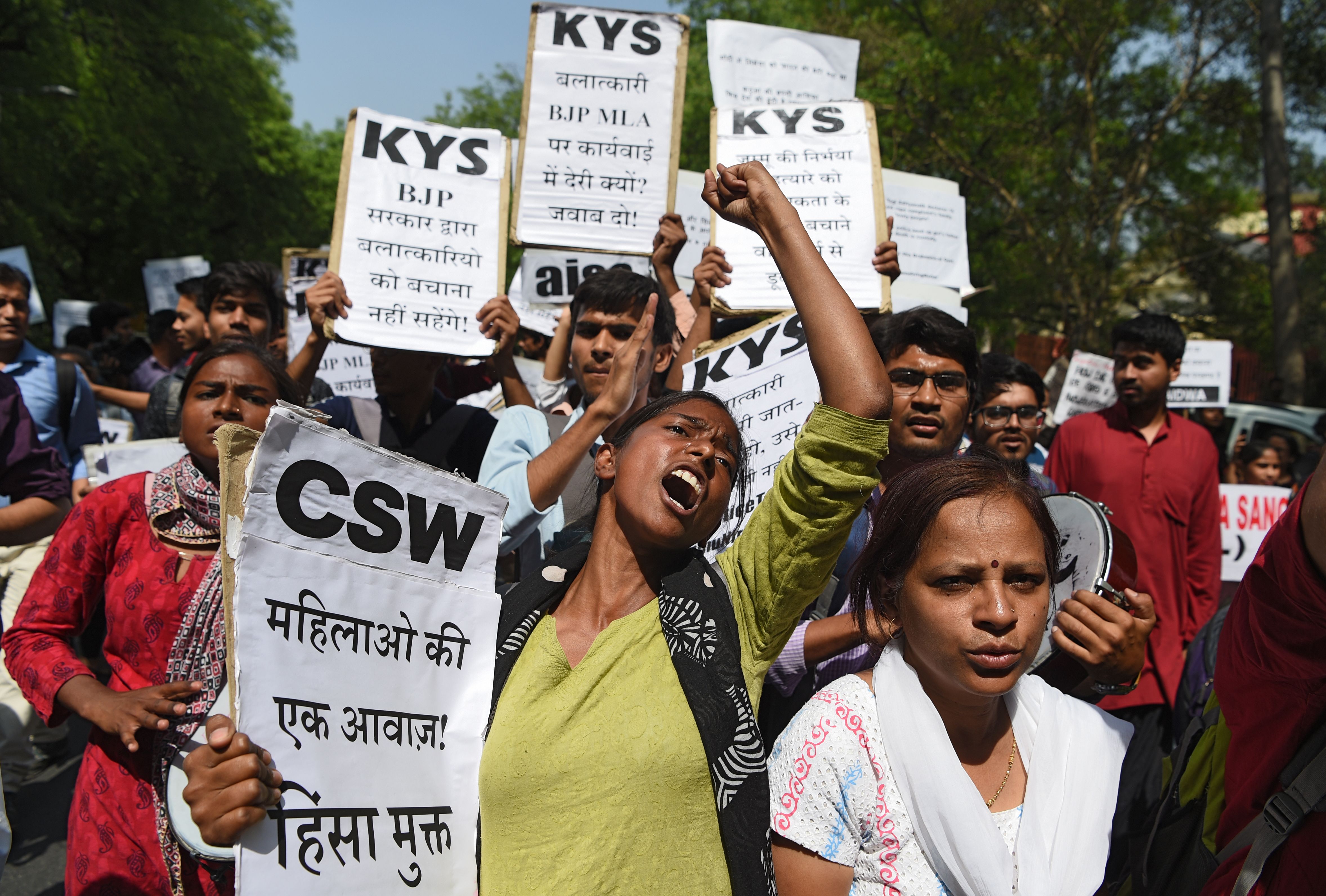 Indian activists and students hold placards and shout slogans during a protest against the alleged political silence over the rape of a child near Jammu and a rape case in Uttar Pradesh state, in New Delhi on April 12, 2018. Indian police on April 12 opened a rape inquiry against a powerful lawmaker from Prime Minister Narendra Modi's ruling party in a case that has cast a new spotlight on impunity enjoyed by the elite. Kuldeep Singh Sengar and his brothers are accused of raping a 16-year-old girl in Unnao district of Uttar Pradesh state, where he is a state lawmaker for the Hindu nationalist Bharatiya Janata Party (BJP). SAJJAD HUSSAIN/AFP/Getty Images)

India’s Supreme Court on Thursday (1) moved the rape trial of a powerful regional politician to the capital, New Delhi, to allay fears he could influence the outcome, a further embarrassment for the ruling Bharatiya Janata Party (BJP).

The case against Kuldeep Singh Sengar, a BJP legislator from northern Uttar Pradesh state who has been accused of rape by a young woman, shot back into prominence after a truck crashed into a car she was travelling in.

The woman is battling for life in hospital, while two relatives were killed in Sunday’s highway collision. Police have registered a case of murder against the lawmaker, following her family’s accusations of intimidation by Sengar’s relatives and associates.

“We further direct that the accident case shall be investigated and completed in seven days,” Chief justice Ranjan Gogoi said after ordering the move from a state court.

He set a 45-day deadline for the rape case, which has made little progress in Uttar Pradesh, to be resolved.

Sengar, the legislator, has denied the allegation of rape and any involvement in the car accident.

“We were fighting here, and we will continue to fight there also,” his lawyer Awadhesh Singh told Reuters after the court’s order on Thursday.

The victim, who was a teenager in 2017 when she says she was raped, only came into the spotlight last year after she tried to kill herself, accusing the police of inaction.

The main opposition Congress party said the decision to move the case out of Uttar Pradesh pointed to a dire law-and-order situation under Chief Minister Yogi Adityanath, a monk-turned-politician who says crime has been reined in on his watch.

“The Supreme Court’s order is proof that Adityanath’s government is neither able to maintain law and order, nor punish criminals,” a party spokesman, Randeep Singh Surjewala, said on Twitter.

Gogoi told the government of Uttar Pradesh, India’s most populous state, which is also ruled by the BJP, to pay the victim interim compensation of 2.5 million rupees ($36,200).