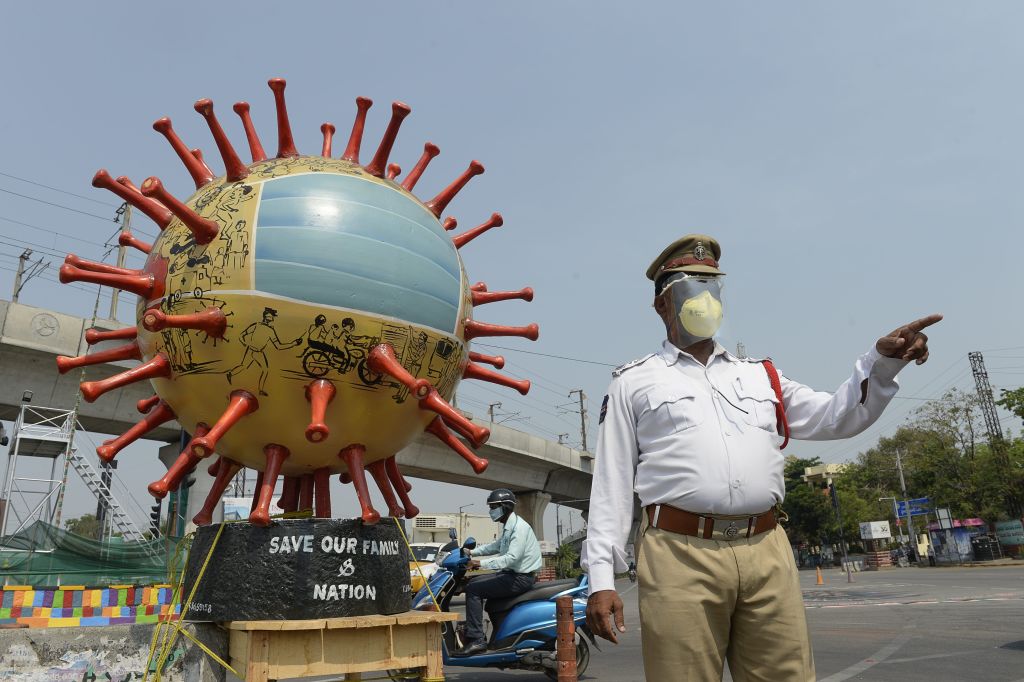 A traffic officer stands beside a coronavirus-themed globe at a traffic junction as he checks commuters travelling during a government-imposed nationwide lockdown as a preventive measure against the COVID-19 coronavirus, in Hyderabad, on April 18, 2020. (Photo by NOAH SEELAM/AFP via Getty Images)

Gujarat in western India became the sixth state to cross the 1,000 mark in COVID-19 cases in the country.

The number of coronavirus positive cases in Gujarat rose to 1,272 after 176 new cases were reported on Saturday (18), a health department official said.     Ahmedabad reported 142 new COVID-19 cases, taking the total number of cases in the city to 765.

Vadodara and Surat reported 13 new cases each, while Rajkot and Bhavnagar reported two cases each, and Anand, Bharuch and Panchmahal reported one case each.

While the number of active COVID-19 cases stood at 11,906, as many as 1,991 people have been cured and discharged, and one had migrated, the ministry said.

As many as 28 deaths have been reported since Friday evening — 12 from Madhya Pradesh, seven from Maharashtra, four from Delhi, three from Gujarat, one each from Jammu and Kashmir and Bihar.

Maharashtra tops the tally of total deaths with 201 fatalities, followed by Madhya Pradesh at 69, Delhi at 42, Gujarat at 41 and Telengana at 18.

Five persons have lost their lives in Jammu and Kashmir while Kerala and Haryana have recorded three deaths each. Jharkhand and Bihar have reported two deaths each.

Meghalaya, Himachal Pradesh, Odisha and Assam reported one fatality each, according to the health ministry’s data.

Bihar has reported 83 cases and Odisha 60. Forty people were infected with the virus in Uttarakhand, while  Chhattisgarh and Himachal Pradesh have 36 cases each. Assam has registered 35 cases  so far.        Jharkhand has 33 cases, Chandigarh 21 and Ladakh 18.

Twelve cases have been reported from the Andaman and Nicobar Islands.      Meghalaya has reported nine cases while Goa and Puducherry have reported seven COVID-19 infections each.

Manipur and Tripura have two cases each, while Mizoram and Arunachal Pradesh have reported a case each.

News
Rushanara Ali MP: “A vote to leave the EU is a vote for intolerance and division”