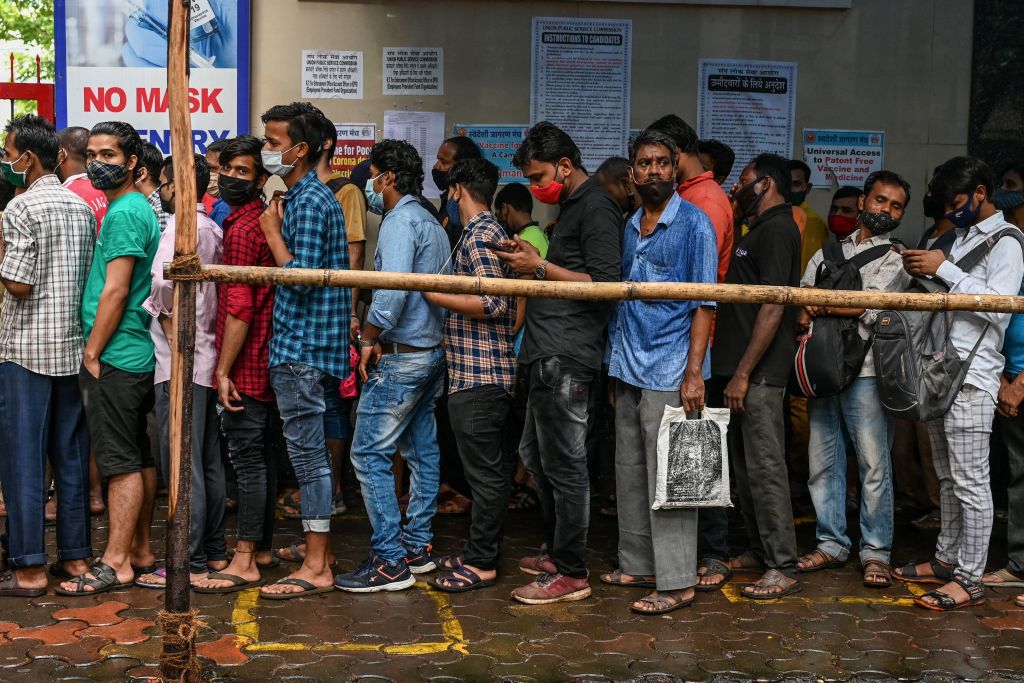 People queue up to get themselves inoculated with a dose of the Covaxin vaccine against the Covid-19 coronavirus, at a temporary vaccination centre set up inside a school in Mumbai on September 7, 2021. (Photo by PUNIT PARANJPE/AFP via Getty Images)

AN Indian court has ordered the government to offer a choice of a shorter four-week gap between doses of the AstraZeneca vaccine to those paying for the shots, down from 12 to 16 weeks now.

India doubled the gap between doses of the locally-produced Covishield vaccine in May, to help stretch scarce supplies, so as to give at least one dose to 57 per cent of its 944 million adults. But just 17 per cent have been fully immunised.

In an order posted on its website on Monday (6), the high court in the southern state of Kerala ordered changes in the health ministry’s vaccine-booking platform to permit the choice, in line with that offered to those flying abroad.

“There is absolutely no reason why the same privilege shall not be extended to others who want early protection in connection with their employment, education, etc,” the court said.

In its remarks, the court drew a parallel with the government’s permission for those planning overseas travel to choose between early and better protection from Covid-19 infections.

The decision followed a plea by two garment companies with a total of more than 10,000 employees.

The court asked the government to enable scheduling of the second dose within four weeks of the first for those who want it, in line with the gap specified in initial vaccine protocols.

The health ministry did not respond to requests for comment.

The ministry has said its decision for a wider gap between doses was based on scientific evidence that the step boosted protection. India’s immunisation campaign began in mid-January, with a four-week interval between two Covishield doses.

India has injected 698.4 million doses of vaccine. About a quarter of the supplies are sold, with the rest provided free.